Grand Canyon, Quite Early Morning, and a Happy New Year!

I had the privilege of spending a very brief day in Grand Canyon this week. I last posted about the sunset we watched from Mather Point, which we mostly missed because of our late arrival. We didn't see any point in missing any more light in the canyon, so after a few hours of sleep we got up and wandered to the canyon edge in the 22 degree breeze. We still weren't quite used to Arizona's time zone, so we arrived on the rim at 6:15 for a 7:30 sunrise. We were the first to arrive at Hopi Point, but others soon followed. The first glow appeared on the horizon... 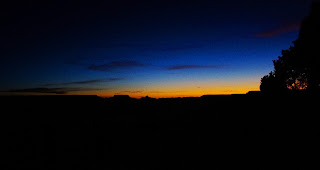 I was just now looking at the definition of 'twilight', which refers to the diffuse light in the sky between the setting of the sun and total darkness. The term can be related to both dawn and dusk, but the secondary meaning of twilight most certainly symbolizes evening...the loss of light and clarity, and coming darkness. What does it mean, for instance, when someone is in the twilight of their life? 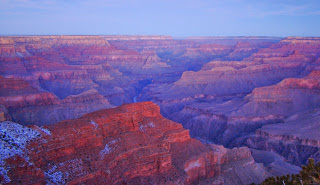 Morning is something else entirely. It symbolizes renewal and birth and life. Out of darkness comes light, and deeper understanding. Standing on the rim of Grand Canyon canyon, we could only make out shapes on the horizon. There was depth below us, but the outlines were hazy. 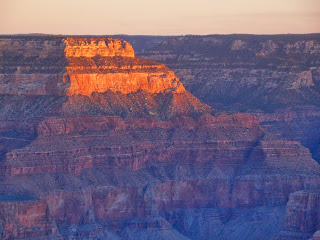 Then comes first light, and the shapes and patterns of rock on the rim become sharper, but darkness still fills the depths of the canyon...

Some say that humankind won't long endureBut what makes them so doggone sure?I know that you who hear my singingCould make those freedom bells go ringing 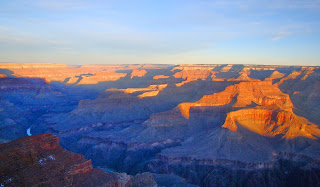 The sun rises higher, illuminating more and more of the canyon. Instead of fuzzy grayness, the canyon becomes an intricate maze of ridges and recesses, each with its own story and drama. Each layer has a unique history that now has become visible in the rising light.


And so keep on while we liveUntil we have no, no more to giveAnd when these fingers can strum no longerHand the old banjo to young ones stronger 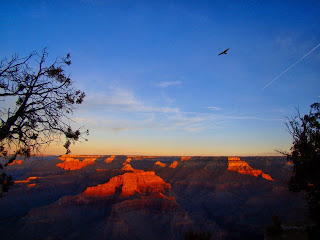 So the new year is here, a date that was set to represent rebirth, a new dawning, the do-over time when we make resolutions to better ourselves. I like the sense of hope that comes with times like this. I have hope for those who are hungry, sick, unemployed, and all of those who are the victims of a society that at times has elevated greed to a virtue. I hope for a continued reawakening of caring for our community in hard times. I have hope that all of you will find happiness in this new year.


So though it's darkest before the dawnThese thoughts keep us moving onThrough all this world of joy and sorrowWe still can have singing tomorrows
Quite Early Morning
Words and Music by Pete Seeger (1969)
(c) 1969 by Fall River Music Inc.
See Pete sing the song here: http://www.youtube.com/watch?v=-RL8ZcmLEB4

Thanks for getting up so early. This is the perfect way to greet the new year.

Let's have more singing tomorrows, indeed! Thanks for sharing such marvelous posts, Garry. A pleasure.

Best wishes in the New Year!