Beauty in my Backyard: Sunset on the California Prairie 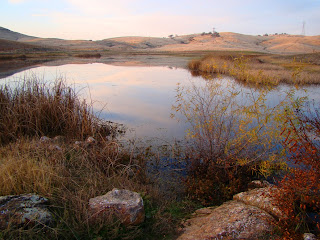 Blogging at Geotripper has been a bit rare of late...finals week is starting and mountains of grading have a way of pushing out other activities. Two straight days glued to the couch midst a massive pile of laboratory reports essentially drives me nuts, and I needed to get out of the house, but where to go when it is already 3 o'clock and the sun is rapidly sinking towards the horizon? The mountains beckon, but they're too far away for the 90 remaining minutes of sunlight. We headed into the prairie in our backyard, the grasslands that mark the edge of the Central Valley and the lowest foothills of the Sierra Nevada. 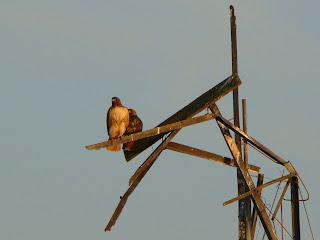 It's the middle of December, and winter is coming. There aren't as many ground squirrels in evidence, but that doesn't mean the local Red-tail Hawks aren't looking for them. We passed a ruined windmill and spied a pair of raptors looking for an evening meal. 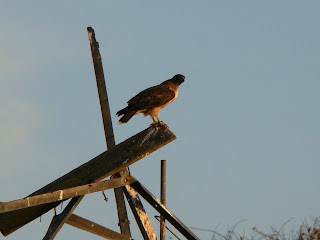 These grasslands couldn't really be mistaken for any kind of pristine wilderness, as they have been grazed by cattle for more than a century. But the land is empty of people, and if you are looking for peace and solitude, this is a good place to search. The rolling hills hide geological violence: metamorphic rocks recording the rise and destruction of ancient mountain ranges, and volcanic ash layers reveal explosive activity only a few million years ago. But tonight there is only the trickling of water from the nearby stock pond, and the chatter of a flock of Red-wing Blackbirds. 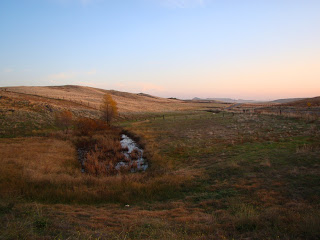 We come back to the stockpond on Willms Road from time to time over the course of the year. When we were last here, the temperature was close to 100 degrees, and grasshoppers were eating everything in sight. Today, it was cold and the bugs were nowhere to be seen. 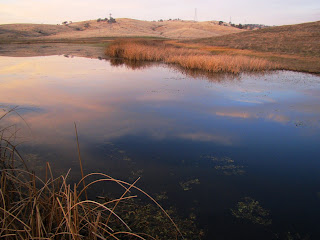 The ground was dry and parched, but there was enough moisture in the storms of November to fill the small lake and send a gentle creek across the plains. The sun was low on the horizon. We prepared to go, but as we climbed into the car, a flock of several hundred Red-wing Blackbirds arrived at the pond and started flying in circles in perfect formation. Every moment or two, 15 or 20 birds peeled off from the flock and landed in a particular section of the tules surrounding the pond. Then another group of birds landed a little further down the shore. Eventually all the birds found a place to roost. I was reminded of commuters on a freeway looking for their offramp. 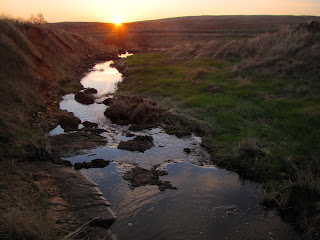 As the sun landed on the horizon, we headed back into town and got some dinner at our favorite Mexican cantina. And now I am back on the couch facing that pile of laboratory reports. But I'm a lot more serene about it now... Looks like a beautiful place to walk. Nice to have nearby, even if it's not the mountains.