Vagabonding across the 39th Parallel: Crossing through the Escalante River Country 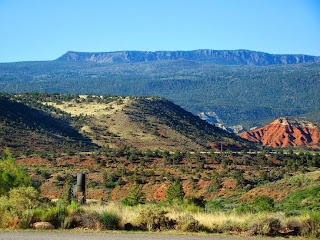 We woke up in the morning to a beautiful view of Boulder Mountain. The massive high plateau, topping out at over 11,000 feet, is said to be the highest timbered plateau in North America (I wonder if the people near Grand Mesa in Colorado would argue the point). The mountain is capped by thick basalt flows and was extensively glaciated during the ice ages. Black boulders litter the surrounding countryside where melt-swollen rivers dropped them.

For eleven days in July we had been exploring pretty close to the 39th parallel as we journeyed across Nevada, Utah, and Colorado. We were headed back home, and as we drove out of Torrey near Capitol Reef National Park, we had a choice to make: stay on the 39th and head over the high plateaus to Cedar City, or head south into the Escalante Country. More like the 38th parallel.  The title of my ongoing vagabonding series may have to change... 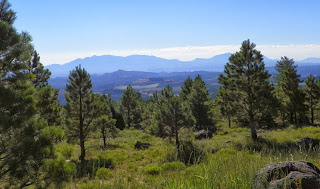 It was really a choice of whether we wanted to rush home, or take a route that would gain us access to one more national monument and two more national parks. For us, a no-brainer. We were out there, we had no appointments back home, and we were still having fun. We drove south on Utah 12, over the high flanks of Boulder Mountain. The road climbed quickly to 9,000 feet, offering some pretty impressive views into the Capitol Reef country and the Henry Mountains. 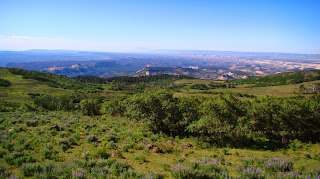 We climbed a second long ridge, and a wide-ranging view opened up to the south, into one of our nation's newer national monuments, Grand Staircase-Escalante (established in 1996). It's a huge park, covering 1.9 million acres, and as the name suggests, it is a slightly schizophrenic park, too. The eastern end of the park is very different from the western end. The Grand Staircase (western side) is a series of escarpments that reveal something like 270 million years of earth history, from the end of the Paleozoic era to the beginning of the Cenozoic. 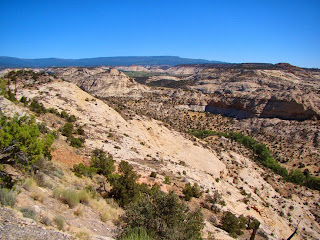 The Escalante portion of the park is mostly composed of just a few layers, primarily the Navajo Sandstone. The rock is well cemented, and forms prominent cliffs. The Escalante River and her tributaries have carved an intricate maze of canyons and gullies leading down to the Colorado River and Lake Powell. Some of the high benches and terraces have a combination of good soils and secure water sources, and have been occupied by various peoples over the last two thousand years or so. The most recent one, the little village of Boulder (founded in 1889), was so isolated that it was one of the last settlements in the country to receive mail by mule train (the particular road we were traveling was paved only in 1985). The town is built quite literally on top of the ruins of an Ancestral Pueblo village now preserved as Anasazi State Park.

Beyond Boulder, Highway 12 crosses the Hogsback, a narrow ridge that drops off for hundreds of feet on both sides. There is barely enough room for the two-lane road. The advice on the sign is well considered! 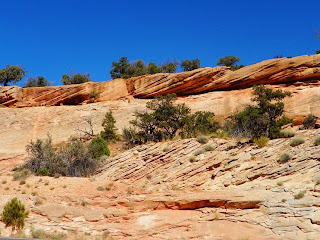 The crossbedded layers of the Navajo Sandstone speak of a vast sand sea during the Jurassic period. The layer is found all across the American West, and reaches thicknesses of 2,000 feet in some places (around 1,300 feet in the Escalante drainage). 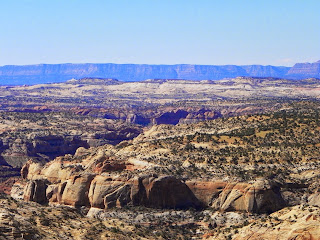 In the foreground, the deep canyon of Calf Creek is visible, while the Straight Cliffs loom in the far distance. The plateau is some fifty miles long. It is composed of Cretaceous sediments that formed in a coastal environment with sandy beaches and vast estuaries where coal formed. 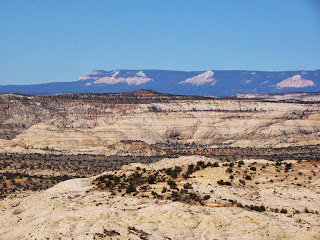 Higher up, the Pink Cliffs were visible. The Aquarius Plateau reaches 11,000 feet and contains the youngest of the sedimentary formations making up the stratigraphic column of the Colorado Plateau. 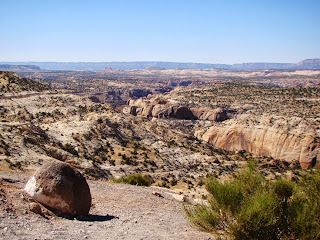 The road descended rapidly into the Calf Creek drainage, and passed the small campground on the valley bottom. There are beautiful waterfalls hidden up these canyons. The Ancestral Pueblo people were here too...we spied a small granary in the cliffs as we reached the Escalante River. 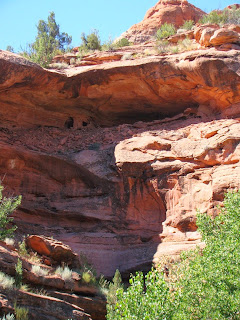 Oh, the Escalante River. It must have been quite the river that carved these deep and intricate slot canyons! We crossed it...here it is. 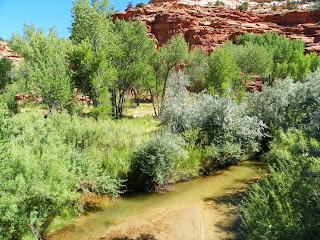 Of course, I've never seen the river flash-flooding, or in early spring during the snowmelt, or in an ice age. It is truly amazing how much sediment has been removed from this landscape since the Colorado River system was established. 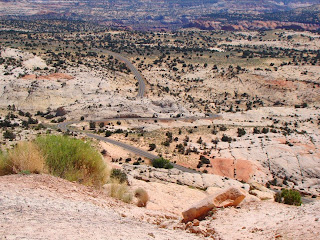 Our road carved a winding path across the eroded sandstone ridges. After several hours we arrived at the village of Escalante. We were a little worried about getting a campsite, so we passed up some scenic state parks: Escalante Petrified Forest, and Kodachrome Basin. If we were at the beginning of our trip, we would have checked out Hole in the Rock or the Kaiparowits Plateau country. But not today... 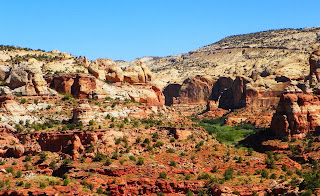 We made it to our destination: Bryce Canyon National Park. I suppose there was some scenery, but there was a taco bar in the resort that afternoon...first things first... 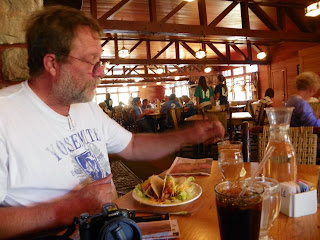 With our hunger satiated, we grabbed our cameras and headed into the park...
Thanks to Mrs. Geotripper for her many splendid photos in today's post.
Postscript: Seems more than one geoblogger is thinking about Grand Staircase-Escalante in these bleak days of winter: check out this blogpost by Jack at Written in Stone.
Posted by Garry Hayes at 2:36 AM

I am so glad you got to these places, all were on my fall list that didn't happen, this year.