Accretionary Wedge Carnival #41: Geology in Progress...the night I got in big trouble

OK, not that kind of trouble. I wasn't falling off a cliff or getting buried in earthquake rubble or anything like that. I wasn't swallowed up by a lava flow, although that was a possibility if I had been more stupid.

This month's Accretionary Wedge is courtesy of Ron Schott and the Geology Home Companion, and he says: "Your mission, should you choose to accept it, is to relate the story of the most memorable or significant geological event that you’ve directly experienced.

What we seek for AccretionaryWedge #41 is an account of a geologic event that you experienced firsthand. It could be an earthquake, a landslide, a flood, a volcanic eruption, etc. (but don’t feel compelled to stick to the biggies – weathering, anyone?) – some geologic process that you were able to directly observe and experience."

Such questions certainly make you stop and think. I've been teaching for 27 years, and there were 8 years of college courses and tech work before that, so I have seen a great many places (as followers of this blog well know), but events? Not so many. I thought about the 1997 floods in Central California, when a 250-year flood nearly destroyed my in-law's mountain home. I thought of the three rock falls I've witnessed in the Yosemite area (story here, here, and here). I also thought about my first major earthquake, the 1971 Sylmar event. They were all important events, but their impact on my psyche was nothing like my encounters with lava in Hawaii.

I've had a somewhat rocky relationship with Hawaiian lavas, with some wonderful adventures and some real disappointments (and believe me, I wish I was there right now!). The ultimate adventure, though, was my midnight discovery of a new outbreak and ocean entry in 2006 that only five people saw, out of the thousands who had visited that week. Here's the story adapted from my post in June 2009:

"My third chance to see Pele's beauty came about in 2006 as a result of a family reunion that included a cruise of four of the Hawaiian islands. We arrived a few days early on the off-chance that there would be something to see on the Pu'u O'o flow that continued to erupt over the years. It had been a mostly quiet year, with lava flowing through tubes for seven miles before spilling into the sea.

I was not really expecting to see much. The problem is that the coastal cliffs around a lava entry are dangerously unstable. As the lava hits the water, it shatters and forms thick layers of unstable cinders, while being covered by lava flows. Every so often, the cinders slide downward, and the lava bench suddenly collapses into the sea. A number of people have been killed because they were standing on the benches when they collapsed. So, the national park service had erected a rope barrier to keep people from the most dangerous areas. Unfortunately, there was no view possible of the lava itself, according to reports. Just the bright orange glow of the steam rising from the turmoil below the coastal cliff.
Still, it was worth a try. I told my wife and son and nephews that I would hike out, be safe, look at the glow of the invisible lava, and be back to the hotel by 9 PM or so. I took water, a flashlight, extra batteries, and my brand-new camera that I had bought that morning, and was just beginning to learn to use.

The hike was longer than I expected. There were so many people parked at the end of Chain of Craters Road that I literally had to walk an extra mile just to reach the trailhead. The flows were entering the sea two miles away, over trail-less pahoehoe flows. The sun set way too quickly and for route-finding I was down to my flashlight, and flashing beacons set up every quarter mile or so. Plenty of people were walking back with their flashlights, so the route was clearly evident. Most of the people I talked to expressed disappointment. Nothing to see but glowing steam. A few idiots who crossed the barriers. I was getting very tired. Pahoehoe may be smooth, but is still very uneven, and it only takes a single misstep to twist or break an ankle. I made it to the rope barrier, and could now see the glow and the steam. It was actually an awe-inspiring moment, as the moon had risen and was reflecting off the ocean behind the steam plumes. But no lava. 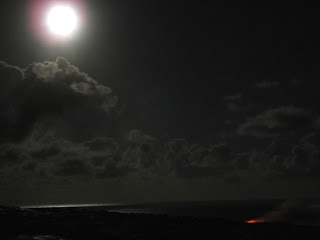 I realized that it had become very lonely. The only others about were four people in a party, and a flashlight off in the distance. I hung with the four people and a lady appeared out of the darkness. She suggested that we might want to walk to the far end of the rope barrier, another quarter mile away. And then she disappeared into the darkness again. I looked at my watch. Already 9:00 PM. I was going to be overdue. But, what was out there?

Curiosity got me, and I set off for the far end of the barrier. After 20 minutes or so, I surmounted a small cliff and looked down, and saw one of the most beautiful sights I have ever seen. 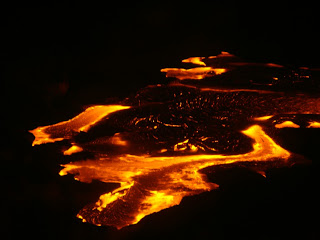 Needless to say, I was in a heap o' trouble when I walked into the hotel lobby at midnight. But I can never forget the incredible gift of that magical sight of lava pouring into the sea."

As I noted, my camera was purchased the very same day. I found out that it used batteries fast, and at the big moment I had to cannibalize my flashlight to take pictures. I was also learning the new settings, and I'm actually surprised I got any decent pictures at all. I also managed to get a short video of the flow just before it plunged into the sea...

But yay for some amazing footage!

Seeing that lava flow had to be worth getting into a little trouble.

That was definitely an astounding sight. Glad you had figured out how to use your camera by that time!

Oh, and do you ever fantasize that the woman who appeared out of the darkness was Pele, eager to show off her work?