Geo-Picture-a-Day Week: Houses Made of (Former) Stone, and a Dog 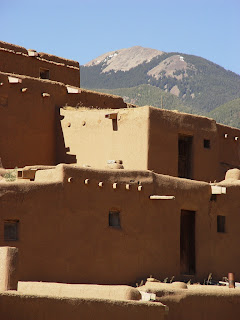 It's day five of geo-picture-a-day week in the Geoblogosphere (thanks to Evelyn at Georneys for the idea), and we've moved on to houses of former stone. Adobe is made of iron-oxide stained clay derived from the erosion of feldspar-rich rocks. The sediments are briefly held together again as an artificial rock for a time while being used as a shelter by humans.

Taos Pueblo is one of the oldest continually inhabited settlements in North America, at around 1,000 years. The Taos Mountains, a sub-range of the Sangre de Cristo Mountains of Colorado and New Mexico, rise high above the village.

The village is justly famous, and the buildings are described by some as the most-photographed in the country. The Taos people are quite private, but tourists are allowed to explore some areas around the plaza. It's a fascinating glimpse into the history and prehistory of New Mexico.

Oh, and the dog. A lesson on how to stay cool on a hot summer day... 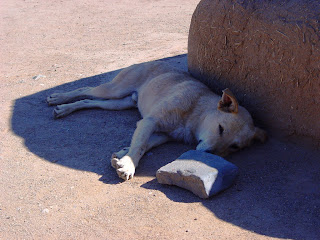 Wondering if you've been to Old Oribi? I believe even older.

I've been there, and also to Acoma, the Sky City. Apparently all three have a legitimate claim to being possibly the oldest.

I thought the abrupt transition from Rio Grande gorge into the Taos plateau while traveling along 68 is very striking too. One minute you're in a twisty road at the bottom of a narrow river and the next minute you're on this flat expansive plateau.