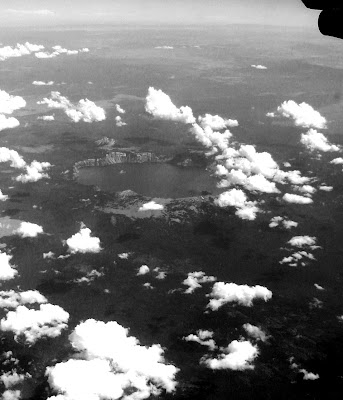 In honor of my friends and colleagues who are gathered together in Portland for GSA this week, I'm sending out a new Airliner Chronicle photo of an Oregon volcano (wish I was there with you all!).

Crater Lake is one of America's crown jewels, a feature so unique that it was one of the earliest National Parks to be established, in 1902. Despite the beauty and unique nature that led to the protection of the lake, the actual origin of the "crater" was not completely understood. Early assumptions were that the volcano had blown out the summit in a titanic explosion (though the local native Americans knew better; their ancestors saw it happen). It wasn't, exactly.

Crater Lake began as a composite volcano, an edifice of several overlapping cones that reached an elevation of between 10,000-11,000 feet, perhaps similar to the Three Sisters a bit farther to the north. The magma chamber was evolving in late Pleistocene time to a more silicic (and more explosive) condition. About 7,900 years ago, a large plug dome, Llao Rock erupted on the northeast flank of the volcano, heralding trouble. Two hundred years later, a massive single vent ash eruption shook the mountain. The ash cloud reached tens of miles into the sky and the entire summit region of the volcano destabilized and began to collapse inward. Vast amounts of hot ash burst out of the flanks of the mountain, burying local valleys 300 feet deep. By the time the eruption subsided, the entire summit region of the volcano, an area five to six miles across, had collapsed thousands of feet into the depleted magma chamber, forming a caldera. It had been the largest eruption in the Cascades within the last million years, releasing some 12 cubic miles of ash into the atmosphere, which covered a vast area of the western United States, even into British Columbia.

In the decades and centuries that followed, water began to accumulate in the basin, eventually filling it to a depth of 1,945 feet, the deepest lake in the United States, and the seventh deepest in the world. Post-collapse volcanism built several cones within the caldera, including Wizard Island, an andesite cinder cone that peeks about the water surface on the west side of the lake.

My picture was taken in the last moments of a miserable nine hour flight from Germany to San Francisco in 2007. My choice of black and white may seem...antiquated, but the forest was almost as blue as the lake in the original picture, so I took out the color and upped the contrast to bring out the lake a bit more.
Posted by Garry Hayes at 4:30 PM

What an amazing perspective of Crater Lake.

Mazama ash was distributed in western Canada well beyond British Columbia. There are numerous exposures of the ash layer here in Alberta, where it is valuable for dating archaeological sites; for example, see http://geoscape.nrcan.gc.ca/calgary/topics/crust_e.php (scroll to the bottom of the page); Mazama ash has also been reported from Saskatchewan: