One of Life's Ironies: Yesterday at Death Valley 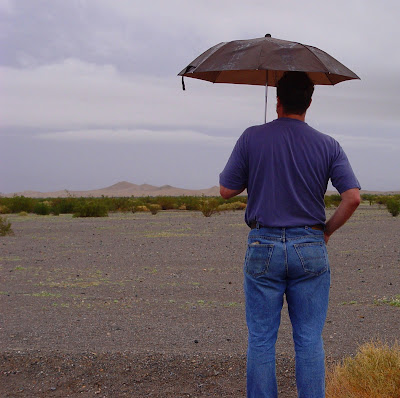 So...my previous post concerned the horrific drought we are facing here in California, with a third straight year of below average rainfall, less than half of normal in many places. And yet, one place in California has been hit this weekend with way more of the wet stuff than they need, with serious consequences: Death Valley.

Death Valley National Park (the climate station at Furnace Creek anyway) is recognized as the driest place in the United States, with an overall average rainfall of 1.92 inches a year (a bit more in the last 30 years, about 2.54 inches). So how many places in the world can you think of that can get half of a year's average precipitation in one day? That happened yesterday at Death Valley, as they got 0.96 inches (on top of about 0.20 inches the previous day). And two more storms are due this week.

That doesn't sound like very much to anyone who lives in a more humid climate, but in a desert, nothing holds the water back...no soils to speak of, no plants. Gullies and gulches are filled with loose rocks and gravel that transform into mudflows when water thunders off the barren slopes above. According to the morning report, virtually all roads within the park save one, paved and unpaved, were closed due to flood damage. Six feet of mud covers Badwater Road where it crosses the Gower Gulch alluvial fan. Roads are completely washed out in some areas.

So, the place in California best adapted to practically no rain is the one place that has way too much of it. But at least much of the state is due for precipitation for much of the coming week, and maybe we can make a dent in the precipitation deficit elsewhere.

As for my own plans, well, anyone want to guess where I am scheduled to take 35 students and volunteers on Thursday? If you guessed Death Valley, you would be right. I wonder how much we will be able to see? One of the nice things about California is that it is very big, and we have alternatives if the roads are still closed. If DV is unavailable, we can check out the Mojave Scenic Preserve, with the giant Kelso Sand Dunes, the Providence Mountains, Pisgah or Amboy Craters (recent cinder cones), and Mitchell Caverns State Park.

Anyone with other ideas, I'm all ears! Today's photo is me contemplating rain at Death Valley in 2005, another wet year. The Stovepipe Well Dunes are visible in the distance (picture by Laura Hollister, I think....).

I was fortunate enough to be in Stove Pipe Wells on February 8,2009. We drove from Orange County that morning and hit some snow on the way into Death Valley,the roads were covered with debris and standing water. Our campground at Stove Pipe had rivers running through it, forcing some of our group who stayed the previous night to throw their camping gear across the rivers of water to people waiting on the other side. We decided that it would be best to head home. We hit the road about 3PM...still raining....and ran into much more snow on the way to highway 395. We were all very disappointed that our trip was rained out but what an experience! How many people can say they got rained out in Death Valley?

Kim
in the OC

What a shame, though. It is interesting here when the weather is not clear and sunny....