Are Republicans Really Suggesting This? 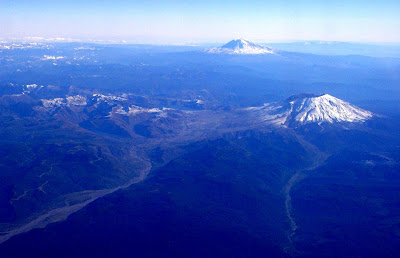 I didn't begin blogging for political reasons, but every now and then I hear a politician say something so ludicrous, so ignorant, that I feel a need to comment. Especially in reference to geology and geological hazards.

Louisiana governor Bobby Jindal gave the Republican response to President Obama's speech tonight, and and suggested that it was a waste of taxpayer of money to spend "$140 million on something called volcano monitoring". If you don't really know a lot about volcanoes in the United States, follow the link for an effective explanation. In a nutshell, the U.S. has the third highest number of active volcanoes of any country in the world, including several that are uncomfortably close to major population centers. This month alone, activity began at a volcano near Anchorage, Alaska. And has anyone forgotten what happened at Mt. St. Helens in 1980 (pictured above, along with Mt. Adams in Washington)? The volcano was also erupting from 2004-2007.

I am appalled at the scientific ignorance displayed here; perhaps Mr. Jindal (of Louisiana, as you may remember) thinks we could also save money by turning off the weather satellites that monitor hurricanes in the Caribbean. I mean, really, what are the chances of a hurricane hitting the Louisiana coast?

I'm glad that a different party is in charge of the government now...

Immediate Update: Green Gabbro is on the topic already....ditto, I say.

It seems so strange, especially adding "whatever that is," which is just guaranteed to make a person sound dumb or uncaring.

That's fine, right after that he can cut a couple hundred million for New Orleans retaining walls and levees...whatever those are.

The consensus across the political spectrum seems to be that Jindal really blew his speech. So maybe this will be the only stupid thing we'll hear from his mouth as a "Rising Star". Great thing is, I just started my volcanoes unit today, so I'll be sure to include this tidbit.

Great find on this story! The republican party is a disaster. The only science they'll fund is weapons development and anything else that can make a buck.

Jindals comments shows what the sickness of religious fundamentalism does to the mind. It gives you supernatural permission to be willfully ignorant and proud of it, just like our former president.

Politicians in general are scientifically ignorant. I am sure that there are plenty of Republican geologists that are dismayed (as I am) over this dumb-shit comment.

Do you seriously think that John Kerry or Nancy Pelosi know the difference between Alaskan and Hawaiian volcanoes or that earthquakes in San Francisco and Seattle have different causes?

On-the-Rocks, I know from reading your blog over the last year that we are on opposite sides of the political spectrum, but I would agree with you that politicians IN GENERAL are scientifically ignorant. On the other hand, Kerry has written a thoughtful book on environmental issues, and agree with him or not, Al Gore has spent a lot of time on the science related to climate change. Pelosi represents a district that suffered damage in the 1989 Loma Prieta quake, so I think her awareness of geological issues is better than average. In my own neck of the woods, long before she was a California senator, I listened to Barbara Boxer give a talk to a room full of geologists about issues related to offshore oil drilling and she proved to be fully aware of the geological issues involved. So, some of them do understand the geological issues. My general feeling is that the present administration is more likely to listen to the scientists before deciding policy, although you can be sure that I will not ASSUME it.