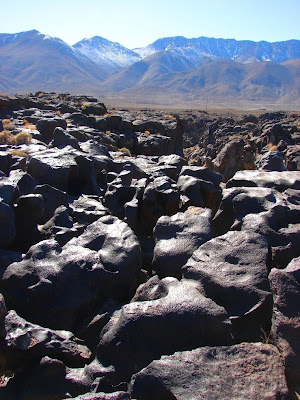 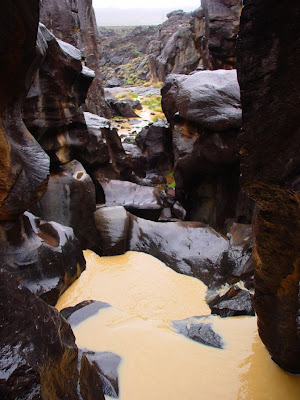 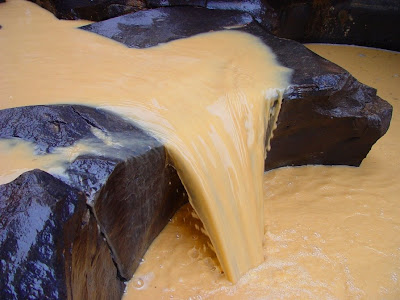 A bit more on Fossil Falls, which was the subject of Friday's Mystery Photo. The falls formed when Owens Lake overflowed during the Pleistocene ice ages. In 2005, we had the unusual pleasure of seeing water actually flowing through the gorge, as we had arrived on the heels of a pretty large storm. The water was rich with silt, giving it the latte-like appearance.
Althought the falls are almost always dry, a modern analogue is visible on the Rogue River in Oregon, just outside Crater Lake National Park. The Rogue River Gorge is a pullout on Highway 62 from Medford, about 7 miles from the park. The river flows through a breached basalt lava tube, and is actively forming potholes that are strikingly similar to Fossil Falls.
Posted by Garry Hayes at 11:12 PM

Do you have a photo of the mystery pot hole from the top looking down? I'm not getting a clear picture of what it looks like on the surface. (May have to go there sometime!)

If you click on the following link you can see a progression of how to climb the pothole, which may also give you better insight as to what it looks like. I have no "top-down" shot, but I think the emergence of the people give some scale.

Let me try that again

That's remarkably cool ... I've been there twice; the first time during a high school geology field trip to Death Valley. That trip cemented my love and mild obsession with geology. I've never seen a picture of it with actual water in it, though. It's amazing to see even a small hint of the forces that created it.