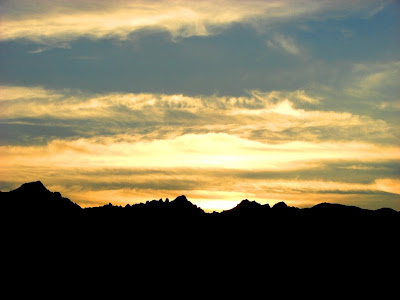 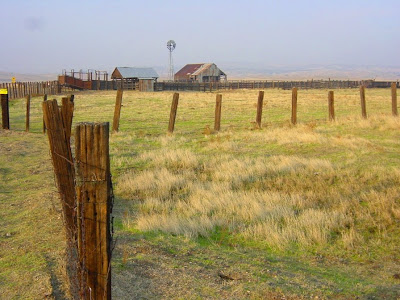 Callan Bentley at NOVA Geoblog has another meme going with the high points of the fifty U.S. states that one has visited. Such a list maybe should also include the high points of the various countries around the world, and maybe that ultimate challenge of the high points of each of the continents. It won't help me much on my list, though. I have a grand total of ....one. Just the same, it was one of the greatest moments of my life, so the title of today's post is a double-entendre.
Back in 1975, I had just graduated from high school, and I was off that summer on the great adventure of my life to that point; a 250-mile, five-week trek through the High Sierra, following the John Muir Trail at times but making our own cross-country route at other times. It was a wonderful trip, and as I spent some of those weeks hiking with my brother, my father and a best family friend, it was a chance to reach those first years of adulthood with a new perspective on our family relationships. And the scenery was world-class (oh, how I wish I had a digital camera in my hands at that time; I was rationed to 20 pictures a week with a Kodak Instamatic).
The last night of the trip was spent on top of Mt. Whitney, which at 14,505 feet is the high point of 49 of the 50 states (Alaska is in a class by itself). I will never forget waking up as the sky began to glow in the far east, lighting up high cumulus clouds out over Nevada somewhere, and watching the sun rise over the Sierra. It was a great way to end our journey.

Ironically, I had walked over most of the best geology of the mountains, but had not a clue of what I was seeing, since my first class in geology would commence the following fall semester. One of my fondest dreams is to do the trip again (maybe in one week chunks!). And with a digital camera....

On a different subject related only by the fact that it originated in the middle 1970's is that I picked up a book by James Michener this last week. Those of you who lived in that time may remember that Michener wrote REALLY thick books that followed a general sort of theme: take a place in the world, and write the story of that place, essentially from the earliest geological development through the first arrival of humans, and then concentrating on one family or group of families leading up to the present day. This was the general idea of his most famous book Hawaii, and I always appreciated how he described the origin of a beautiful volcanic island paradise that grew, eroded and completely disappeared before any human set foot on it.

He wrote a book about a fictitious town on the high plains of Colorado called Centennial that followed the same pattern, including an excellent description of the formation of a gold vein, and the life and activities of a dinosaur right up to the moment of its death and subsequent fossilization (and its discovery millions of years later by one of the characters). It was in fact a thinly disguised history of towns like Greeley and Longmont, where my wife's family originated, so the story resonated with both of us (the present-day town of Centennial in Colorado was named after the book). A 26 hour mini-series based on the book was telecast about 1977, which was released recently on DVD, prompting me to pick up my old dog-eared copy of the book.

I was once again reminded that as turgid as some of Michener's books could be, his geology was about as good as one could expect in popular literature. Centennial includes a lot of background material on the geology of the High Plains and Rocky Mountains, mining, soil erosion and the effects of drought, especially during the Dust Bowl years with the horrific dust storms, and water-use issues, including the draining of the High Plains Aquifer.

So...if you are bored and have a lot of time to kill, check it out!
Today's photos include a sunset over Mt. Whitney (just bit left of the center), and a Sierra foothills farm standing in for the High Plains prairie in which the story of Centennial was set.

Any idea where this discrepency comes from on Mt. Whitney's elevation? 14,505' (you and Wikipedia both say) versus 14,494' (which is what I've always heard, and what was posted at geology.com)?

Simple. I was using Wikipedia. They SOUNDED like they knew what they were talking about with the new datum. They reference http://www.ngs.noaa.gov/cgi-bin/ds_mark.prl?PidBox=GT1811.

It doesn't sound right to say 14,505. It kinda gets imprinted on your mind permanently when you see the 14,494 written in stone on the summit.