During a Drought, What Do You Think About? 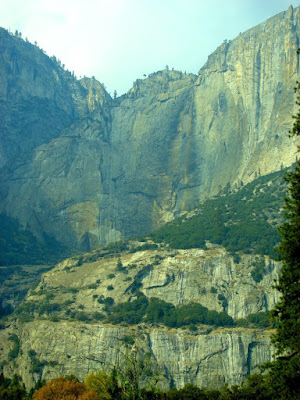 California is facing an unprecedented drought this year. It's the third dry year in a row, with rainfall and snow totals in the 50% range in the critical Sierra Nevada watershed, which provides something like two-thirds of California's water resources. Some irrigation districts will be tapped out, with no deliveries scheduled for many farmers. Some towns are already rationing water. So what do we think about? Floods. I came across this video by Mark Holloway via the Yosemite Blog of the 1997 floods at Yosemite Valley. The visuals are impressive.


On the last day of 1996 the snowpack was much higher than normal in the central Sierra, near record levels . I was camping with my son and his scout troop at a camp along the Merced River down in the Central Valley. The racket inside the mess hall was deafening, so I set up my cot on the outdoor porch, and got ready to bundle up for a cold winter's night. Only it wasn't cold. I was sweating. A big storm was forecast, coming out of the tropical part of the Pacific Ocean, what we term a "Pineapple Express". It started raining, a warm heavy rain that dropped a few inches in the valley, but as much as three feet at elevations as high as 10,000 feet. This rain was falling on the record snowpack, and the rivers started rising...and rising. And all hell broke loose in Yosemite Valley and the other canyons of the central Sierra.

A normal spring runoff along the Merced River in Yosemite Valley might amount to 2,000 cubic feet per second. During the height of the flood, the flow reached 24,900 cfs. Large areas of the valley floor were inundated to depths of 6-7 feet, two campgrounds were destroyed, miles of roads were washed away, the sewer system badly compromised, and the Park was closed to visitors for the first time ever (I think; I don't remember when the big federal government shut-down occurred).

Downstream, the effects were nearly catastrophic. On the Tuolumne River at Don Pedro Reservoir, the watermaster had some very hard decisions to make. Official flood level for the river at Modesto is about 9,000 cfs. But 130,000 cfs was entering the reservoir, and the lake would be full in 18 hours (usually takes a month or more during normal spring runoff). The decision was made to open the floodgates, and 70,000 cfs was allowed to flow downstream, making this the largest flood event in Modesto history. But the dam held, and only briefly overflowed in an uncontrolled manner. Unlike many Central Valley towns, Modesto is several tens of feet above the riverbed, and so the damage to the town was relatively limited (but terrible enough for the relatively few homes along the river floodplain).

There were small ironies. There is a small recreational park on the Merced River at Bagby Grade on Highway 49. Perpetually underfunded, the park lacked certain amenities, like sufficient numbers of picnic tables. Following the flood, the park's ranger found dozens of tables floating in the river. He was ready to utilize them until Yosemite employees caught wind of it and came to get their tables back.

The larger irony? As everyone braced for the next horrible storm, only one significant storm came during January (with no damage), and the next month of 1997 may have been the driest February in recorded history. My rain gauge in the Central Valley recorded 0.23 inches in February, and only 0.09 inches in March. April? 0.13 inches.

The news and cable outlets were full of stories of flooding in Yosemite, Sacramento and Reno, but some areas were more or less cut off, and some small hamlets in the mountains were too small and isolated to merit much media attention. One of these directly concerned my family, and may be a story for another post.

Want to learn more about the floods of 1997? The National Association of Geoscience Teachers, Far Western Section sponsored a field trip to Yosemite in 1998 to look at the flood damage and the effects of several major rock falls. The guidebook is available for sale here (proceeds support academic geology scholarships). An excerpt of the field trip is available on my department website.

The top photo, if you don't recognize it, is Upper Yosemite Falls as it appears from about July to October or November in most years.
Posted by Garry Hayes at 10:41 PM

Nice footage of the 97 flood!

john muir called that type of flood - a 'flood bloom'. we were there as soon as they reopened the park and it looked as though mother nature had given the valley a fantastic bath.