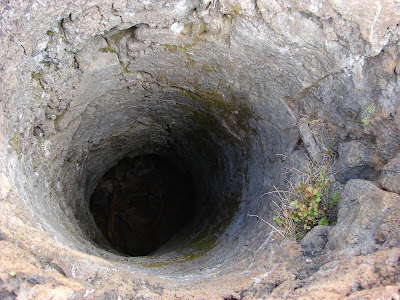 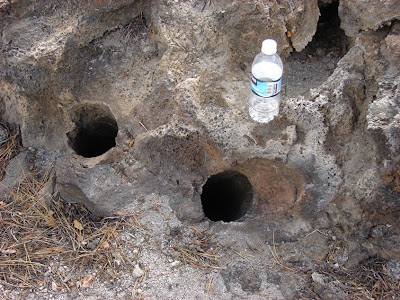 I was gratified by the many responses to Friday's Mystery Photo, and all of you were partly right, in that the photo was in basalt. The picture was in fact taken at Fossil Falls near the Coso Range east of the Sierra Nevada (and south of Owens Lake). During the Pleistocene ice ages, Owens Lake filled with glacial meltwater, and spilled over into the valley to the south. The river poured over a thick basalt flow. With all manner of boulders and pebbles to work with, the swirling eddies produced a dazzling collection of huge potholes. The pothole in the picture was unusually deep and narrow, and eventually broke out into the main channel about 9 or 10 feet down. The more energetic and flexible members of our party could shimmy up the tube and climb out. I am about 15 years past being able to do it anymore!
The site is not far from the "village" of Olancha, and includes a small undeveloped campsite and restrooms. The falls area was popular with early Native Americans, with stone rings and obsidian work sites, as well as a few petroglyphs in the area. After rains, the potholes also play host to fairy shrimp, who are born, live, reproduce, and die within a period of a week or two.
Nearby Red Hill is a classic cinder cone, and numerous cinders and volcanic bombs can be found in the vicinity. The Sierra Crest provides a wonderful backdrop.
The pictures above reflect how reasonable the tree mold idea was. Tree molds form when lava flows inundate forests. The lava freezes around the tree trunks, and the trees then burn, leaving behind perfect molds. I have seen tree molds of big Ponderosa Pines on Medicine Lake Highland in northern California, and they are large enough and deep enough (10-15 feet) to climb into. The two molds in the second picture are two branches from one tree, and they merge about two feet down.

Okay, I'll bite. What features suggest that the first hole is an eddy pothole? None of the ones I've ever seen amount to more than a couple of feet deep. How does the water flow keep the grinding material sufficiently energetic to grind down that depth but not enough to widen the diameter of the pothole?

The setting is pretty convincing, in that this particular pothole is surrounded by hundreds of others of all sizes and depths that were clearly formed by flowing water. The falls are at the top of a forty foot thick lava flow, so tree molds are not likely. I would imagine that because most of the abrasion is done by large cobbles in the very bottom of the pothole, once it reaches a certain depth, no widening occurs on the upper part of the hole