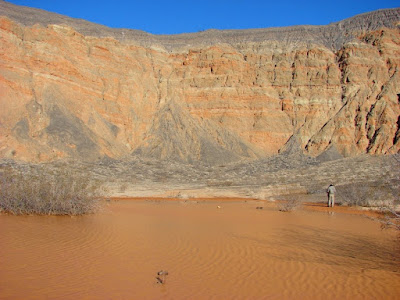 Well, not as bad as it sounds. For the first time ever, Stovepipe Wells in Death Valley National Park has wi-fi. It's as fast as dial-up and cuts in and out, but it is a connection to the outside world! I'm conducting a field studies trip to Death Valley this weekend, and despite some very threatening weather, we've been pretty lucky, dry overnight, and gloriously clear weather today.

The pits? Well, I'm standing at the bottom of a 500 foot deep hole that isn't really a pit, so much as a cryptovolcanic explosion crater. Easy to get down into; a lot more difficult to get out. I was feeling my 50 years at that point!

The crater, Ubehebe, formed within the last 2,000 years when basaltic magma approached the surface and encountered groundwater. The groundwater flashed to steam, causing several dozen explosions that pitched cinders and debris in layers up to 50 feet thick. Earlier phreatic (groundwater) explosions occurred at least 7 or 8 times, judging from the number of individual overlapping craters. The orange layers are oxidized lake sediments, perhaps caused by the superheated water and steam.

Ubehebe is at the far north end of the paved park roads, about eight miles from Scotty's Castle. It is well worth a look!