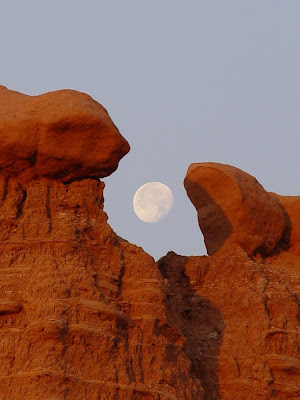 I've been meaning to return to my continuing narrative on the geology of the Colorado Plateau; I didn't want to strand you all in the early Jurassic, as pretty as the rocks of that time are. The next layers on the plateau are a highly variable series of formations from the middle Jurassic gathered together as the San Rafael Group. A lot of geologic action was taking place throughout the region at the time, with the occasional incursion of shallow seas to the region, continuing desert conditions, rivers and floodplains, and maybe even a local asteroid impact. Some of them are formidable scenery-makers, especially the Entrada Sandstone, the subject of the next few posts.

Today's photo is an early morning shot from the campground at Goblin Valley State Park in south-central Utah, showing a unique outcrop pattern of the Entrada. It's a teaser, though. More later!
Posted by Garry Hayes at 11:29 PM

Ooh, I hope you talk about this paper: