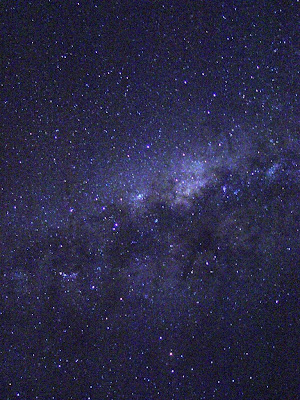 This month's Accretionary Wedge is hosted by Goodschist, and includes a great topic, "Geologeeeeee in Spaaaaaaaace!" I have noticed that some of my favorite topics on planetary science have already been mentioned by those with far greater expertise than my own, and I look forward to reading them all in a few days. What I am doing instead is to publicly struggle with a teaching concept I have been thinking about for a few days. It has to do with our perception of the cosmos.

I spent the weekend in the Owens Valley of eastern California, and slept under the stars (I REALLY hate tents). Staring into the darkness, I could see the Milky Way stretching across the sky, thousands of individual stars, and Jupiter shining in the west. Intellectually, I know that shooting stars, planes, and satellites are phenomena of our own planet, that the planets are part of our Solar System, that there are stars in our local corner of the cosmos, and that the Milky Way is a vast distant arm of our galaxy. The Andromeda galaxy lies far beyond. But looking at the sky, I could only see a dome, painted with little dots of light which for all I could tell were equidistant from me. The ancients thought of the cosmos this way, and they made stories to go with the random arrangements of stars that formed bears and hunters and scorpions.

Even though we know we are not looking at a dome, we still take our kids to planetariums, and above their heads is ... a dome. Stars are projected onto the surface of that dome, and lots of wonderful education ensues. But kids come away thinking of the heavens as a dome. They go to summer camp, and they learn astronomy by identifying constellations, just like their ancient ancestors. And the sky remains to them as a dome. There is no true sense of vastness of the space they are seeing.


So it is that I stand in the darkness, and try to wrap my mind around the literal infinity that lies above me, and it occurs to me to try things a bit differently. If you can get to a dark place give this a try. If you have a full view of the sky, you need to lie down and change the perspective a little. If you have a view of the Milky Way, orient yourself so that it extends across your view, from left to right. Now, instead of thinking of the scene as being above you, in your mind make it in front of you. You are at the front window of a vast spacecraft flying level with the plane of the galaxy, and all the stars below the galaxy are also below you, at your feet. Only the stars above the plane are actually above you. For me, anyway, this perspective gives a three-dimensional aspect to the cosmos, and the dome disappears from view.

Doesn't work for you? Well, try something else... lay on a flat rock or a cot with a full view of the sky, and look at it with your head oriented upside down. Suddenly, you will find yourself clinging to the bottom of the planet, looking at the entire cosmos below you.

I know this particular post doesn't exactly follow this month's Accretionary Wedge; I am absolutely fascinated by new findings of liquid erosion on Titan, of ice-covered seas on Enceladus, of volcanoes on Io, and incredible explorations of the surface of Mars, and all the incredible photographs coming from the Cassini spacecraft at Saturn. But I wonder that despite the technology of giant telescopes and interplanetary spacecraft, we still stand on the ground and see the sky the same way our ancestors did millenia ago. This is a delightful and direct connection with our past, but a real disconnect between what we knew then and what we know now. Let's finally be done with domes!

Today's photo was taken on the flank of Mauna Kea in Hawaii on a perfect night.
Posted by Garry Hayes at 10:12 PM

Yeah, I think you just have to try to look farther and farther into the spacey distance. The idea of looking as though tied to the front of a spaceship is interesting, though. Too bad I don't, then, seem to be going at warp speed...