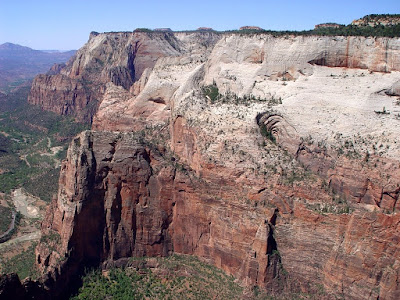 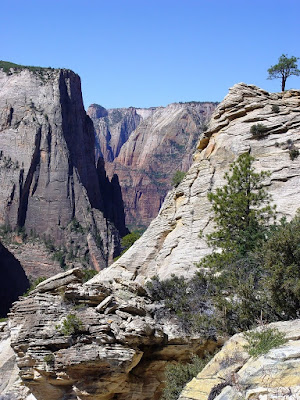 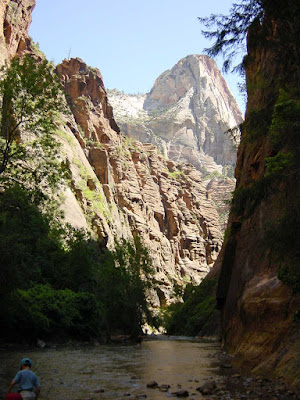 Zion National Park is one of the crown jewels of the national park system. Millions include it on a tour of Grand Canyon and Bryce Canyon (on their way to the air-conditioned casinos in Las Vegas). It is sometimes described as a Yosemite Valley without the granite and the glaciers, and the description is apt, but for a unique reason: like Yosemite, probably 90% of the visitors spend their time on the valley floor, and few take the time to explore the remainder of the park, including the spectacular Kolob Fingers section and the extensive backcountry.

The park is the ultimate expression of scenery produced by the Navajo Sandstone. The canyon walls rise 3,000 feet or more above the valley floor, and 2,000 feet of that are cliffs of Navajo. The canyon was carved by the Virgin River, a tributary of the Colorado River. In the lower reaches, the canyon floor is relatively wide and flat (and thus the site of camps and lodges and other developments), but upstream beyond the end of the road, the canyon forms a series of narrow gorges a few yards wide, but thousands of feet deep (the Narrows of the Virgin River).

The difference in the nature of the upper and lower canyon is striking, and is explained by the different ways that sedimentary rock is eroded. The cliff-forming Navajo Sandstone lies atop the Kayenta Formation, which is easily eroded and forms ledges and slopes. When the water carves through only Navajo, the canyon is narrow, but when the Kayenta is exposed, it erodes quickly and undercuts the cliffs of Navajo, which then collapse by way of mass-wasting and slope retreat. Rockfalls are a serious hazard in parts of the canyon. During my visits to the park (perhaps 25 times), I have seen two rockfalls, one of which filled the whole gorge with dust.

What to do at Zion? If you have only a short time (shame!), a hike up the Narrows (an easy stroll on a paved trail, and then a wet walk up the middle of the river), and a hike to Angels Landing (quite a bit harder, with 5 miles and a climb of 1,500 feet or so) should be a priority. With more time, get out to the Kolob Fingers, and take a longer hike. Quite a few miles in is the Kolob Arch, which lays claim to being one of the largest arches in the world. A hike to Observation Point is incredible (see the top two pictures), but also exhausting. What is your favorite secret at Zion?
Posted by Garry Hayes at 11:14 PM