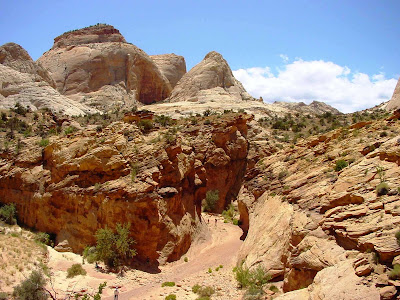 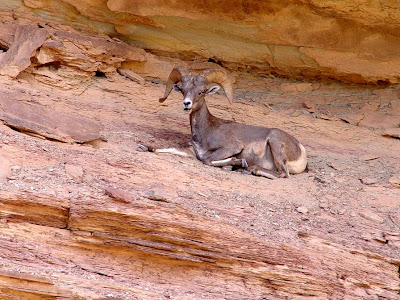 Capitol Reef National Park was mentioned in an earlier post discussing the Wingate Sandstone, but the Navajo Sandstone is also a major contributor to the scenery of the region. The Capitol Dome is an eroded outcrop of Navajo that looks, well, kinda like the capitol dome. These distinctive knobby peaks are a characteristic erosional pattern of the Navajo Sandstone, and can be appreciated during a stroll through Capitol Gorge.

Prior to the construction of the present-day paved highway 24 along the Fremont River (in the 1960's), the only way through the "Reef" was the dirt and gravel road through the narrows of the Capitol Gorge. Like the Virgin Narrows at Zion, canyons carved only in Navajo tend to be deep and narrow. When the river erodes to the level of the underlying Kayenta Formation, the easily eroded shale layers cause slope retreat and rockfalls that widen the canyon. The road was narrow and winding, and was flooded constantly; the streambed and the road were one and the same. I have no doubt that cars and people were constantly trapped and carried away before the new highway was built. Today, the narrows is a pleasant scenic stroll.

The Fremont People were the first inhabitants of the region, and their petroglyphs are a constant reminder of their former presence. At Capitol Gorge, a badly vandalized panel still preserves some of the hallucinogenic figures. The urge to write on stone did not end with the rise of modern civilization. The rocks of the gorge contain hundreds of inscriptions from travelers from the 1880's to the present day (unfortunate, in the latter case). Some of the carvings are on apparently inaccessible cliffs; I wonder if it was worth it to hang from a rope to leave a sign of your existence for future generations. Some people certainly thought so (I guess I am blogging, instead of carving).

I have wondered at times why bighorn sheep seem to be the predominate choice of petroglyphs when animals are the subject matter. I rarely see deer or bear or lions, but there always seem to be sheep. Are the horns a "guy" thing? In any case, I sent my students down the gorge in 2005 and took off to see the trail to the Capitol Dome. I rounded a corner in an alcove cut into the Kayenta shales, and came face to face with a big ram. He seemed supremely unconcerned with my presence, and allowed me to take quite a few telephoto images. So, I can't help but notice that I am posting a picture of a bighorn, but not one of a deer or a jackrabbit. Maybe I understand the Fremont better than I think...
Posted by Garry Hayes at 3:41 PM