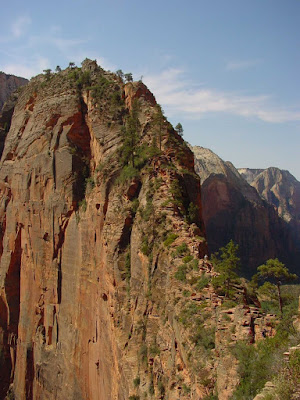 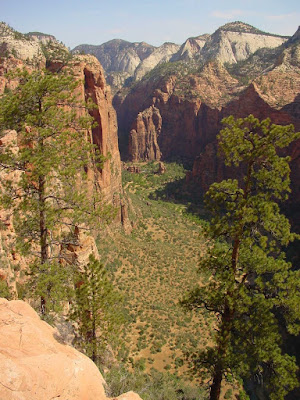 Zion National Park is a real Jurassic Park, a place where the scenery is dominated by a single formation, the Navajo Sandstone. Today's photographs include the Angels Landing ridge and a view from the upper part of the trail towards the Narrows of the Virgin River. I consider the hike one of the most spectacular treks in the American west. The middle section of the trail is cut through a sheer cliff, and climbs through a narrow cleft called Refrigerator Canyon (for obvious reasons on a hot day). Then the fun parts: Walter's Wiggles, a series of tight steep switchbacks, and then a vertigo-inducing climb up the spine of Angel's Landing itself (top photo). The climber is assisted by a series of chains placed in particular steep sections. The payoff is a wonderful falcon-eye's view of Zion Canyon (peregrine falcons nest in the region). There is nothing quite like looking over a sheer 1,000 foot cliff.

The sand dune environment is not conducive to the preservation of fossil bones, but dinosaurs did wander over the dunes, leaving behind numerous trackways. Here and there, fresh-water oases left behind deposits of limestone that contain a fossil record of crocodiles, small dinosaurs, and other smaller creatures.

The sandstone of the Navajo is quite porous and the underlying Kayenta Formation is not. Water percolates through the sandstone, and when the Kayenta/Navajo contact zone is exposed, springs often flow. The much visited Weeping Rock, with its hanging gardens of ferns and flowers is one of these springs. 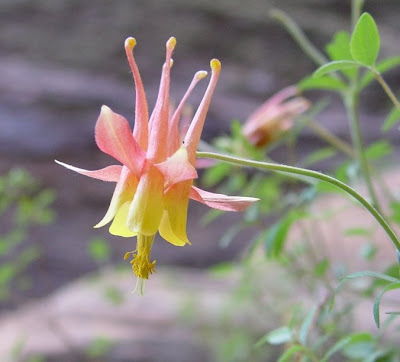 Zion is a beautiful place...

An added thought in terms of perspective. The incredibly steep and tall looking Angel's Landing in the photo at the top can also be seen in my last post, from Observation Point, which is on the rim of Zion. In that first picture, Angels Landing is the flat bench-like cliff in the center right of the photo. The cliff has the shadows on it. Observation Point is a tough hike, almost twice the climb of Angel's Landing, although there are no chains on top of vertical cliffs to give one that feeling of vertigo...