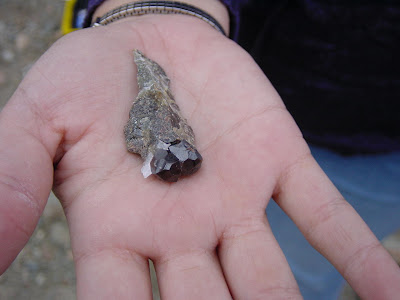 I found this out on a political blog of all places. It's apparently also National Cinnamon Raisin Bread Day. Since raisin bread reminds me of a metamorphic gneiss with porphyroblasts of garnet, I shall live with the strange juxtaposition...

And don't forget to take this rock-hounders safety test:
http://www.fi.edu/fellows/payton/rocks/safety/quiz.htm
Posted by Garry Hayes at 3:48 PM

I've a couple of issues with that rock hound safety quiz. You shouldn't work under overhangs even with a hard hat and, in the UK at least, we would never recommend jeans and tennis shoes as appropriate clothing for the field.

Actually, I would have to agree...some of the most unstable places I can imagine are vertical quarry walls. I don't let my students anywhere near them.

Since it was apparently a quiz for kids, I am more forgiving about the shoes question.

I had no idea! I looked at a lot of rocks today, but think I forgot to collect any. (But I do have piles by my side door.)

MJC - I have an award for you at my site, for your great picture and all the great geology you talk about.

Tennis shoes are a big no-no, a good way to break your ankle. Disused quarries are a personal favourite - there is normally plenty of scree around without having to bash at a cliff-face.

The last field trip I was on (a graduate one) I was astonished to find only 2 out of 16 of us had brought a hammer!