Back from the Eastern Sierra Nevada 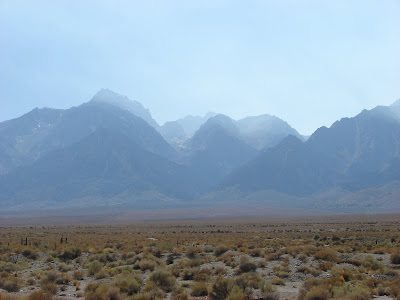 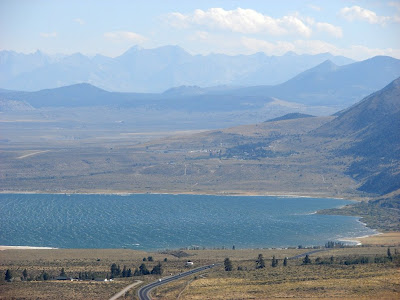 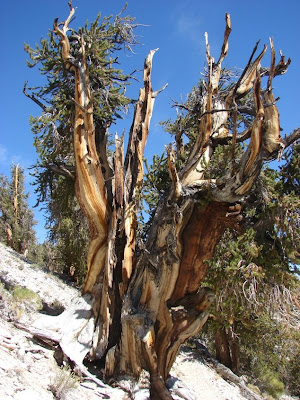 We are back from our journey to the east side of the Sierra Nevada, mostly in one piece, mostly not sore, and quite not thrilled to be back in a stuffy classroom! We spent four days touring the length of the Owens Valley, Mono Lake basin, the White Mountains, and the barren hills around the ghost town of Bodie.

The Sierra Nevada is a discrete block of continental crust that is considered to be sort of a micro-plate that is moving northwestward, stretching and breaking the crust in its wake, causing the formation of the deep fault valleys of the Basin and Range province. Owens Valley is one of the deepest of these, with a floor at 4,000 feet, and mountains on either side reaching 14,000 feet (a valley nearly twice as deep as the Grand Canyon, but not carved in any way by rivers). The Sierras include numerous granitic intrusions interspersed with roof pendants of older metamorphic rocks. The lesser-known White Mountains on the east side of Owens Valley are composed of some granite, but mostly of late Proterozoic and early Paleozoic sedimentary and metasedimentary rocks (the Cambrian sediments alone are around 3 miles thick).

Growing up, I thought the eastern face of the Sierra Nevada would be a great stand-in for the Mountains of Mordor in the Lord of the Rings by J.R.R. Tolkien. The rocks make a nearly impassable barrier for something like 100 miles with only an occasional pass at less than 10,000 feet. To say the mountains are scenic is a gross understatement...the first of today's photos is the range crest in the vicinity of Mt. Williamson near the village of Independence.

Farther north, the mountain front is only slightly less rugged, but other factors make for a fascinating geology field trip. In the center photo one can see the inland sea of Mono Lake in the foreground, some of the plug domes of the Mono Craters in the middle distance, and the high peaks just east of Mammoth Lakes on the skyline (the view is from the viewpoint near Conway Summit on Highway 395).

Mono Lake is an ice-age relic that has no outlet (a pluvial lake), so water leaves the region only by evaporating. There are no fish (it is three times saltier than sea water), but there are plenty of brine flies and their larva, and there are trillions of brine shrimp. This is a tasty mix for the millions of birds that use the lake as a stop-over on their seasonal migrations. The lake lost much of its volume when Los Angeles diverted many of the streams that fed the lake in 1942. Recent litigation has led to an agreement to bring the level of the lake to something approximating its original depth (not really, but at least enough to keep the shrimp and flies alive). Parts of the shoreline are decorated by the eerie looking tufa towers that form where fresh water springs flow into the brine.

The Mono Craters have very few actual craters. They are instead a curving line of rhyolite plug domes that began erupting around 35,000 years ago, and it is a safe bet to say they are not done yet; the last episodes of volcanic activity were only 600 years ago, at Panum Crater and Inyo Craters.

The last photo shows one of the oldest living things in existence: a bristlecone pine. Some of these trees have survived for 4,500 years in the harsh environment at 10,000 feet on the flanks of the White Mountains. The tree in the picture is not dead; a thin line of bark and a few needle-covered branches show that it still lives. It is one of the old ones, though. The fierce winter winds have abraded and polished the resin-rich wood where the bark is gone. Even the dead trees persist; a dendrochronology of the living and dead trees reaches back at least 7,000-8,000 years, giving us an accurate record of droughts and climate change over the time period.

Four days is not nearly enough time to see all the geologic wonders in this region...
Posted by Garry Hayes at 3:58 PM