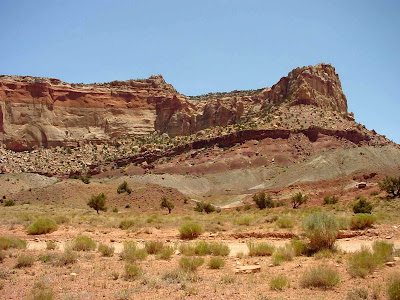 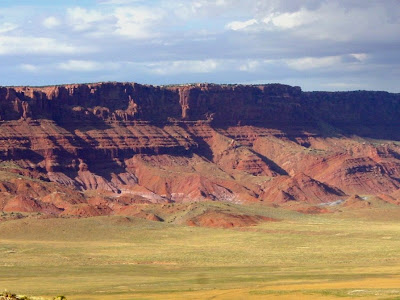 Today we make a return to our series on the geologic story of the Colorado Plateau. The Mesozoic Era left a stunning variety of rocks across the region. The Triassic story, with the Moenkopi and Chinle formations has been told, but today we explore a few of the real Jurassic Parks, the ones in which the scenery is formed by rocks laid down during the Jurassic Period. The scenery makers today are the Wingate Sandstone and the Kayenta Formation, which can be seen especially well in three parks: Capitol Reef National Park, Colorado National Monument, and Vermilion Cliffs National Monument. The Wingate appears in a prior post involving Canyonlands National Park. I notice that Geology Happens is a fan of the Wingate as well.

The Wingate Sandstone formed in early Jurassic time as sand dunes migrated across the increasingly arid region. The layer tends to be bright orange-red, and has the crossbedded structure typical of rocks formed from dunes. Dune environments are not generally conducive to the preservation of fossil material, but reptile trackways are occasionally discovered.

The Kayenta Formation lies above the Wingate and is most often exposed as a series of colorful ledges and slopes. It formed as a series of rivers flowed across the dune fields from the Wingate deserts. It contains numerous trackways of dinosaurs and other reptiles. Fairly easy to erode, it is not well-known as a scenery-former but it plays a critical part in the dramatic scenery at Zion National Park (to be covered in a near-future post).

Colorado National Monument lies just south of Grand Junction and Fruita, Colorado (the top picture, and this one from a previous post). It is one of our lesser-known parks, but is well worth a visit if you travel through the region. The park preserves a spectacular eroded monocline, which is a folded sequence of rocks where the layers are horizontal at either side of the flexure, much like a rug thrown over a stairstep. A marvelous paved road snakes in and out of canyons, mostly within the Kayenta Formation just above the Wingate cliffs. And the Wingate cliffs are incredible, a sheer drop just a few steps beyond the edge of the road. Although such roads are not being built in national parks today as a matter of preservation policy, I have to appreciate the effort that went into the construction of this one. There are many, many wonderful overlooks, a modest campground, and a decent visitor center. Lots of services are available in the nearby towns. Some very important dinosaur discoveries were made just outside the park (in younger formations), and signs point to the quarry sites.

Capitol Reef National Park is illustrated in the second picture above, and in the uranium post a few days ago. The park lies in the practically unhabited region of south-central Utah (Torrey and Hanksville are the main urban centers with a combined population of about 500). The park preserves another spectacular monocline, the Waterpocket Fold, that runs nearly 100 miles in a north-south direction. The "reef"of the park name refers to the difficulty settlers had in crossing the rugged eroded rocks of the monocline. Even today, a single paved highway crosses the structure, and a few unpaved gravel roads. A Mormon settlement (Fruita) was established here in the 1800's, and the fruit orchards are still maintained by the park service and volunteers. A favorite park activity is picking cherries and other fruits in season. The region was utilized in earlier times by the Fremont people, a lesser known culture than the Ancestral Puebloans of Mesa Verde and other areas to the south.


Vermilion Cliffs National Monument is at the same time one of the more familiar and least-visited monuments in the United States. The interior of the park is rarely visited, and there are few facilities of any sort for tourists; a true wilderness park. On the other hand, hundreds of thousands, maybe millions of people drive past the park on Highway 89 from Jacob Lake to Lees Ferry and Navajo Bridge, where the Vermilion Cliffs cannot be missed or ignored. The sheer cliffs rise 3,000 feet above the highway, and are just beautiful. California Condors have been re-introduced into the region, and the lucky traveler might just catch a glimpse.


Even with my more or less yearly visits to the region, I have never been in the monument, with one huge exception. Most of the park is a vast high plateau, but the northeast portion of the monument is dissected by an incredible gorge carved by the Paria River. The headwaters of the Paria lie to the north at Bryce Canyon National Park. Where the river reaches the Navajo Sandstone, it has cut an extremely deep canyon, the Narrows, with a major tributary, Buckskin Gulch, which is one of the longest deepest slot canyons in all of the Colorado Plateau.


I was in the Boy Scouts, and one of the last trips I took as a scout was a six-day backpack down the Paria River to Lees Ferry. It was one of the greatest adventures of my life, and probably had a lot to do with my eventual choice to become a geologist. Just the same, I knew little of geology at the time, and I would dearly love to repeat the adventure one day. I will search for my pictures of the event, but I had a camera I had no idea how to use, so the pictures that came out at all were over- and under-exposed. Plus, I dropped the camera in quicksand, and it was never the same after that (i.e. it never worked again at all).


Have you ever been in real quicksand? It's not very much like Hollywood quicksand, but it was an invigorating experience sinking to my knees most unexpectedly. I had walked across about 50 feet of it before actually breaking through, and it was lots of fun getting back out!
Posted by Garry Hayes at 11:15 AM