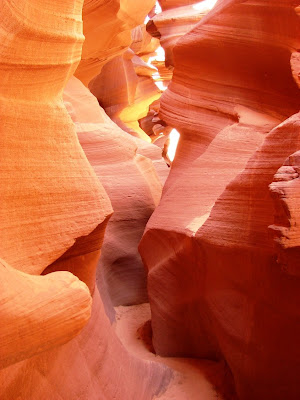 If the question arises as to what formation is responsible for the most dramatic scenery in all the Colorado Plateau, the Navajo Sandstone would have to be near the top of everyone's list (anyone out there have opposing arguments?). It is hard to imagine a rock unit that can erode into more beautiful colors, forms and structures (and I am being totally scientifically objective here....).

200 million years ago, a vast desert had spread across what is now Colorado, Arizona, Utah and Nevada and north into Wyoming. The idea that sand dunes represent a typical desert is a widespread misconception (typical American deserts are no more than 5% sand dunes), but in this case it was true: huge dunes crept across the landscape, in places burying the underlying rocks to a depth of 2,000 feet or more. The source of the sand? Early assumptions said the last remnants of the Ancestral Rockies, but some recent work suggests that the sand was derived from vast river systems with headwaters in the Appalachian-Caledonian mountain system. 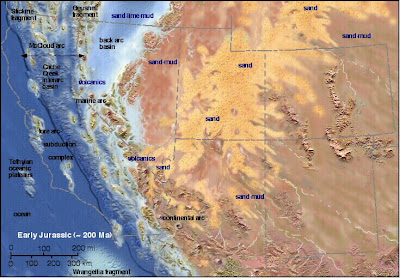 The uniqueness of the Navajo lies in the structure of the rock itself, the crossbedding, and the somewhat unique range of color: in different parks the rock is white, orange, red, yellow and vermilion. The variations are apparently due to a bleaching effect of once-present hydrocarbons that dissolved, and then reprecipitated, iron oxides in structures like domes and thrust faults. The iron oxide minerals hematite, goethite and limonite provide the intense color, and in places have formed the unique "moqui marbles", spherical concretions of hematite that are popular with rockhounds.


I want to explore a couple of the Navajo Sandstone parks, and I start today with a lesser-known park, by name and visitation, but very familiar because pictures of this canyon are a staple in art galleries. I am referring to Antelope Canyon, outside of Page, Arizona. Antelope Canyon is on the Navajo Reservation, and has been established as a Tribal Park (like Monument Valley). The canyon is a small tributary to the Colorado River, and from above, you would barely know it is there: you can literally jump across the opening. Underneath is a slot canyon, more than 100 feet deep... 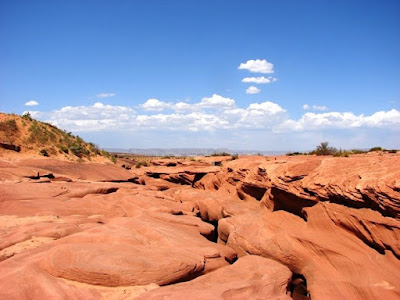 Over hundreds of thousands of years rushing waters have ripped away at the sandstone, but because the well-cemented nature of the rock, mass wasting is ineffective at widening the gorge. Beneath the surface is a fascinating labrinth of twisting passages and curving walls. The canyon is both a challenge and a Mecca for photographers. The play of reflected light ranges across the brightness spectrum, and at the right times the rock seems to glow internally.

Slot canyons carry their own dangers, and flash floods are a real concern here. In 1997, eleven tourists were killed when a distant storm sent waters slashing through the canyon. The Navajo Nation now carefully monitors visitation when flooding is a possibility. Still, despite entry fees and charges, the canyon is a delight to visit: there are two sections, an upper canyon with a level floor, and a lower canyon that requires some climbing and squeezing, although ladders and steps are now in place to allow fast evacuation if floods come. It is a truly beautiful place. I visited in 2007 during a day I had to drive 750 miles, but I spent a long time in the canyon, snapping more than a hundred pictures. It was magical....

I agree, the Navajo erodes into some great looking formations. Waterpocket fold is one of my favorite Navajo places.

These are beautiful photos. I've realized that I don't have any great digital pictures of eolian sandstones. May I use these in class?