The Real Jurassic Parks: Goblin Valley and the Entrada Sandstone 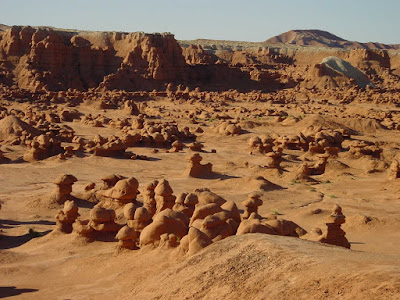 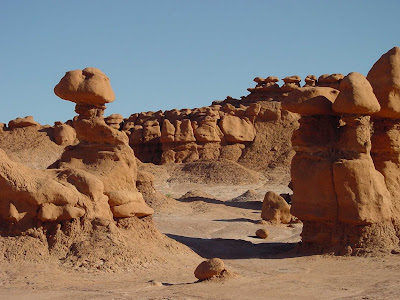 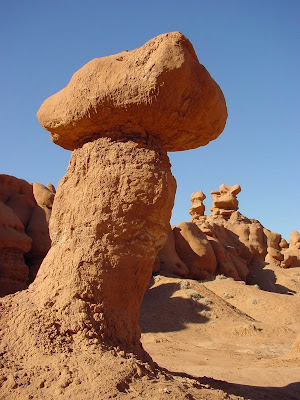 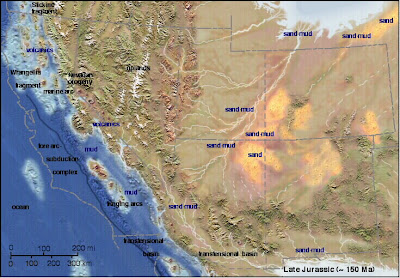 This paleogeographic map is courtesy of Ron Blakey at Northern Arizonal University
Welcome to one of the most unusual (and most isolated) parks in the American Southwest, Goblin Valley State Park. It is located in south-central Utah, miles from anywhere (the relative metropolis of Green River, population 973, is about 50 miles away). It is a fine introduction to the Entrada Sandstone and Summerville Formation, two of the more scenic layers within the San Rafael Group.

In the latest part of the middle Jurassic (around 165 million years ago) huge changes were taking place across the American west. A subduction zone had formed off the coast of California, and compressional forces had caused the faulting and uplift of a range of mountains across Nevada. A shallow sea occasionally extended into the region from the north, leaving vast deposits of mud, silt and sand deposited in tidal flats, while in other areas river floodplains and desert dunes predominated (the region still lay across the subtropical belt, much like the Sahara today). The sediments, which have a distinctive red-brown color, are known today as the Entrada Sandstone.

In other regions, the Entrada is primarily a cross-bedded sandstone that forms distinctive cliffs, but here at Goblin Valley, the formation is more variable, with alternating layers of sand, silt and shale that erode in a differential manner, forming slopes and ledges.

The Goblins are short spires called hoodoos, which resulted from the erosion along joints and fractures in the rocks. If you are a fan of the movie "Galaxy Quest", will immediately recognize the park, and will probably be looking for cute little purple cannabilistic space aliens and immense rock monsters. You will probably be disappointed in your search, but your imagination will probably conjure up even more fantastic creatures as you wander through the goblins.

The park includes a unique campground that is nicely developed with showers and flush toilets but very little shade (there is a nice group campsite too). During the summer we make a point of arriving in the late afternoon when the sun is approaching the western horizon. The views east are expansive, and few parks in the American west offer better star-gazing. The San Rafael Swell, a huge monocline, lies just to the west. The Henry Mountains, one of the last mountain ranges in the United States to be given a name, lie just to the south. Reaching over 11,000 feet, they are a series of laccoliths, a unique type of mushroom-shaped intrusion, almost, but not quite volcanoes (although volcanoes may have once existed above them). The region is also a great place for seeing pronghorn antelope!
Posted by Garry Hayes at 11:50 PM

The Entrada in Cathedral Valley is similar in silt/sand/shale composition making a different erosional look for the Entrada if you have only visited Arches. It's not the hoodoos of Goblin but definitely not the smooth rounded edges we are used to in eastern Utah.

Definitely looks like Galaxy Quest, a favorite spoof movie of mine! Brings it all back...