The Real Jurassic Parks: Kodachrome Basin (and a great resource!) 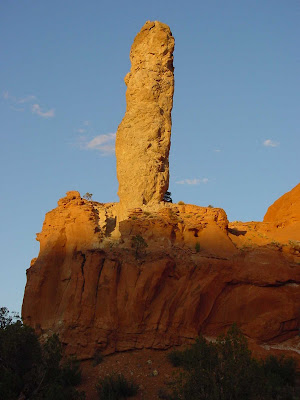 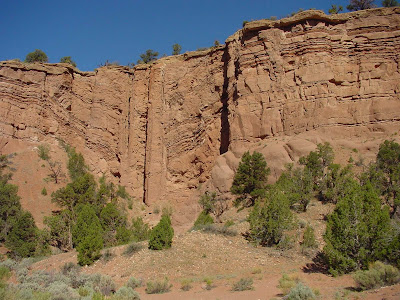 Back on the (virtual) road with our exploration of the geology of the Colorado Plateau, and the current series on the REAL Jurassic Parks. In our last post we were chasing "Galaxy Quest" rock monsters through Goblin Valley. Today, we are seeing another of the little-known gems of the Plateau country, Kodachrome Basin State Park in southern Utah. Kodachrome is another park that puts the Entrada Sandstone on prominent display along with something like four dozen unusual formations called clastic pipes.

These enigmatic features jut through the Entrada Sandstone, and being better cemented than the surrounding rock, they tend to stand out as towers tens of feet high (the highest are more than 100 feet). They are mostly composed of breccia and sandstone. Their origin is unclear, although there are plenty of well-considered hypotheses including cold and hot springs, earthquakes, overburden pressure, and UFO's (they always have something to do with weird things out here). I have no particular expertise to judge, but I have to note the presence of several major fault zones in the immediate vicinity, and can easily imagine an origin rooted in liquefaction effects (this statement acknowledges the fact that we can see the things we know about and can miss evidence favoring things we know nothing about...).

Some of the pipes are exposed in their original matrix of Entrada, as can be seen in the second photograph. Notice how the strata form a graben or syncline in the area adjacent to the pipe.


Why the unusual name? Aren't there trademark restrictions or something on such blatant commercialism? Actually, the name was given to the basin in 1949 by the National Geographic Society following an expedition in the region. Yes, an expedition. Even today, the area remains one of the most isolated corners of the lower 48 states. They were using the newfangled color film, and were inspired by the intense coloration of the rock (for those of us too young to remember, there was a time before digital cameras....). The basin became a state park in 1962, and was called Chimney Rocks for fear of trademark infringement or something, but Kodak recognized good PR, and happily let the state keep the name. They have even sponsored park brochures (in color, of course).

If you are leading a field trip through the region, and find nearby Bryce Canyon too crowded and noisy, consider Kodachrome as an overnight stop. There are two nice group campsites, and a good shower facility (we of the long trip persuasion have to remember the basics....). A network of short trails explores the park, and a short drive east reveals the spectacular Grosvenor Arch. A longer gravel road (Cottonwood Canyon Road) travels south along the Cockscomb Monocline, emerging near Page and Glen Canyon Dam. It's a great drive...in dry weather. Don't try it after storms! The Utah State Parks website for Kodachrome can be found at http://stateparks.utah.gov/parks/kodachrome/.

BTW, geology road guides for all state and national parks in Utah can be accessed at http://www.utahgeology.org/uga29Titles.htm. These are PDF's of the first edition of the truly excellent book Geologic Road, Trail, and Lake guides to Utah’s Parks and Monuments, P.B. Anderson and D.A. Sprinkel, editors (Utah Geological Association-29 Second Edition, , 2004, CD-ROM, $14.99. Available at the DNR Map and Bookstore, http://mapstore.utah.gov/ ). The roadguides are a companion to the very comprehensive Geology of Utah's Parks and Monuments, also available from the Utah Geological Association.
Posted by Garry Hayes at 10:48 AM

Geotripper, I am enjoying your trip through the plateau! Excellent observations. Please don't forgt that Kodachrome SP allows mountain biking on some of their trails and it is a very fun ride past the sand pipes. Also some of the slots down Cottonwood in GSENM are not only lots of fun, but allow you to see some x-sections of the almost-ubiquitous Navajo SS.