Even More Beautiful Trees, and a Sequoia Story 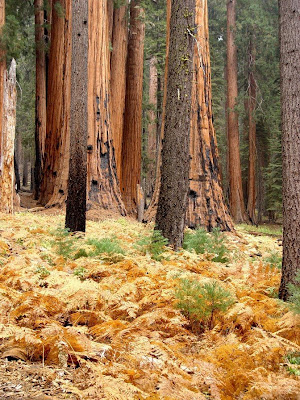 The mini-meme on trees grew larger today when I wasn't looking....here are some more that I noticed when I got online tonight (in addition to the links mentioned in my previous post). I am really enjoying your contributions; it's great to see that we geologists can sometimes step back and appreciate the "overburden" that sometimes obscures our all-important outcrops. Of course, all these trees exist at the consent of geology, and I can't help but add some geological notes at the end of the post tonight...
Hypo-theses offers some beautiful tree shots from the Lake District in England (including some Norwegian pegmatite to keep things geological)
Eric at Dynamic Earth added two posts, one of some Junipers, which are also high on my favorites list, for the same reasons, and the other a case of some trees squeezing the life out of some boulders.
Chris at Highly Allochtonous contributed some great pictures of trees growing on very old rocks in South Africa (including one of my favorite landscaping species, the Jacaranda)
Callan Bentley at NOVAblog has some beautiful fall colors here. I haven't had the privilege of seeing fall colors in the northeast US yet, and would very much like to some day.
Pools and Riffles provides some more information about species in the eastern U.S. that I am not too familiar with.
In Terra Veritas offers some photos of trees revealing something out of whack with the underlying geology (really, though, you weren't obligated, but I appreciate the contribution!)

UPDATE: RockGlacier at Cryology and Co adds some comments about the role of dendrochronology in geology studies.

I especially appreciated the return of Ron Schott and his Gigapan camera view of a Sequoia Tree in the Lost Grove within Sequoia National Park (along with a great macrogigapan shot of the underlying granodiorite). I love the Sequoias, and have included their geological story in two of my trip guides (for Fall 2006 Tuolumne Meadows and and Fall 2005 Kings Canyon).
In short, the Sequoias have existed as a genus for 200 million years or more and once existed in groves across North America, Europe and Asia. The trees of Petrified Forest National Park were probably a related species, and I have this wonderful image in my mind of giant dinosaurs wandering among the giant trees. Today the genus exists only as 60 or so groves of Sequoia trees in the Sierra Nevada, as the coast redwoods in northern California, and as the Dawn Redwood in the smallest corner of China, in a single grove of no more than 5,000 trees that was only discovered in 1944, and described in 1948. It had been thought to be extinct in the Miocene epoch.

The Sequoias were apparently wiped out elsewhere by climate change, especially the Pleistocene ice ages, but in the Sierra, they survived, barely, by propogating up and down the gentle western slope of the mountains as the climate alternated between glacial and interglacial periods. Some pollen work suggests they may have been on the very verge of extinction, but luckily for us they survived, and now are appreciated as the largest living things on the planet. Nearly all of the existing groves are protected in National and State Parks, including the recently created Giant Sequoia National Monument.

I have ideas for two or three more blogs on the subject of trees and geology, but I have vigorously been avoiding the pile of grading in my living room, so keep watching later this week....thanks again to everyone for your contributions!
Posted by Garry Hayes at 7:23 PM

Hy, can I join this tree meme, because trees are not only beautiful, they are also useful for geologists