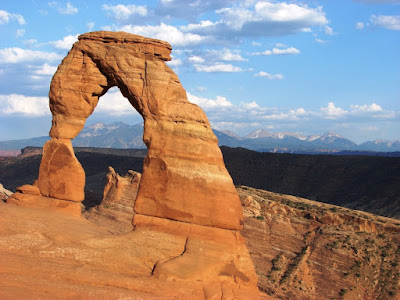 "This is the most beautiful place on earth.
There are many such places. Every man, every woman, carries in heart and mind the image of the ideal place, the right place, the one true home, known or unknown, actual or visionary. A houseboat in Kashmir, a view down Atlantic Avenue in Brooklyn, a gray gothic farmhouse two stories high at the end of a red dog road in the Allegheny Mountains, a cabin on the shore of a blue lake in spruce and fir country, a greasy alley near the Hoboken waterfront, or even, possibly, for those of a less demanding sensibility, the world to be seen from a comfortable apartment high in the tender, velvety smog of Manhattan, Chicago, Paris, Tokyo, Rio or Rome-there's no limit to the human capacity for the homing sentiment. Theologians, sky pilots, astronauts have even felt the appeal of home calling to them from up above, in the cold black outback of interstellar space.
For myself, I'll take Moab, Utah. I don't mean the town itself, of course, but the country which surrounds it--the canyonlands. The slickrock desert. The red dust and the burnt cliffs and the lonely sky--all that which lies beyond the end of the roads."

These are the opening words of one of the most influential books in my life: Desert Solitaire by Edward Abbey. I first read it in the last years of my adolescence, just when I was searching for a direction in my life. What could I do for a career that would combine a love of wilderness, the chance to spend time in the outdoors, and teaching about the wild places to those who haven't been there yet? After reading his book, I wanted to be a park ranger in the worst way, although that desire was later tempered by the realization that I would have to be more of a policeman of the wilds, dealing with a recalcitrant bureaucracy, and dealing with all manner of moronic tourists (ok, not all of them...but still...). His book, published in 1968, was a description of a summer spent as a ranger in what was then Arches National Monument. The monument was, at the time, one of the most remote corners of North America, barely accessible by rough dirt tracks, generally unvisited, and one of the most beautiful places in the country. It was a call for protection of the beautiful places, and a warning about the future direction of wilderness management in the Colorado Plateau region.

The book ended up a paradox: it publicized a region of spectacular scenery, which in turn led to a vast increase in visitation which in turn required developments and "improvements" to accommodate the visitors, which in turn threatened to destroy the very wildness that made the region so attractive to start with. Abbey was worried about "industrial tourism", and yet was largely responsible for the fact that it happened in this place that he called the most beautiful on earth.

Well, I never became a ranger, but I was lucky enough to find a career that allowed me to achieve my other goals. As a geology instructor, I have been leading trips into the Plateau region for twenty years, and in a sense, I have become one of the industrial tourists, but usually in the name of education. I want my students to come away with an appreciation of not just the scenery but of the vast history represented by the rocks.

Arches National Park is one of the ultimate expressions of scenery produced by the Entrada Sandstone. More on the park in the next post. For today I provide a picture of one of the more famous sights in the park, Delicate Arch, with the laccolithic La Sal Mountains in the distance. It lies at the end of a stunning 1 1/2 mile hike across the slickrock that ranks with Angels Landing as one of my favorite strolls in North America.
Posted by Garry Hayes at 11:05 PM

Greetings from the UK!
Since my family's visit to Arizona and Grand Canyon in March, I've come to realise just how much of the truly stunning American southwest that we missed. The Arches is definitely top of my list of 'must see' destinations next time we visit. Keep up the excellent work on your blog which I follow daily! Cheers, Alyn.

I went to Arches National Monument twice when I was a Geology grad student at UT El Paso, in 1977 and 1979.

Both times the shutter jammed on my Miranda 35 mm camera, the first time it somehow un-jammed, so I at least got some photos of other places in the area, e.g., Mesa Verde, Canyonlands, etc.. The second time it didn't unjam and I lost several subsequent rolls of slides (it sounded like it was working, neither time was I aware of it being jammed).

After that was when I started carrying a backup camera. I hope someday to get back to that area, hopefully the (digital) camera spirits will smile upon me.