Looking Down on Yosemite: A Return to Taft Point 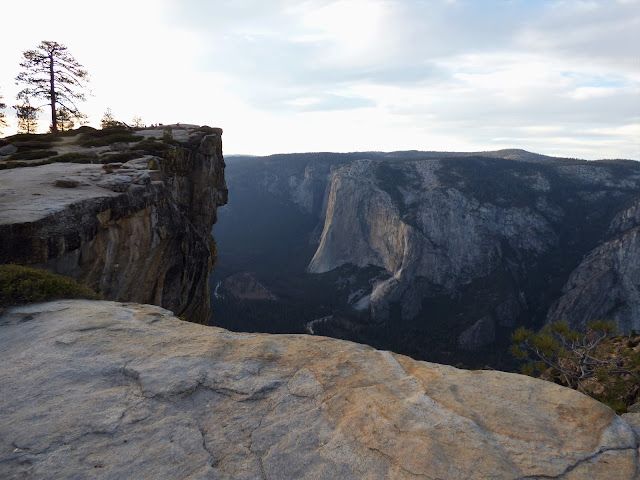 I don't know how it happened, but somehow 12 years slipped by since I last made the hike out to Taft Point above the floor of Yosemite Valley. It's not that tough of a hike, only 1.1 miles with just a bit of climbing on the way back. But what a payoff at the end. There is nothing quite like standing on the brink of the ultimate abyss. 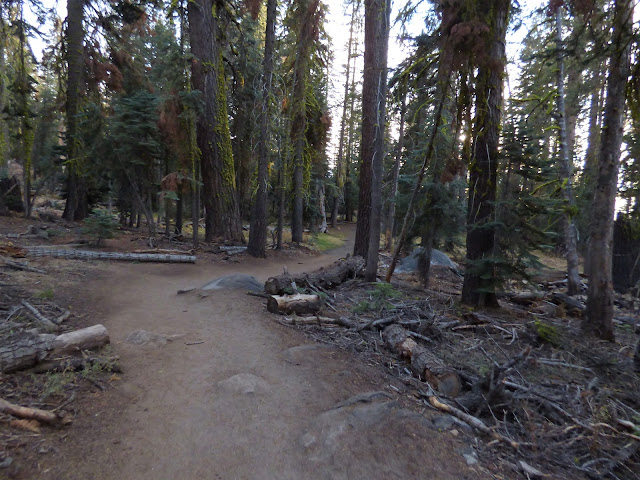 The trail begins at a parking lot about two miles up the road from Glacier Point. Parking is limited and fills quickly, so be sure to arrive early in the day, or you'll be walking a lot farther from your parking spot. Or you can do what I did and wait until about the last day of the season before a major snowstorm, and come at the end of the day when the sun is quickly sinking below the horizon.

The beginning of the trail in the deep Red Fir forest gives few hints of the grandeur that lies beyond. It almost immediately passes an unusual outcrop of almost pure quartz (remember y'all, it's a national park; no collecting!). The trail plunges into the forest and crosses Sentinel Creek, which a short distance downstream falls over the brink of Sentinel Falls, more than 1,000 feet high. 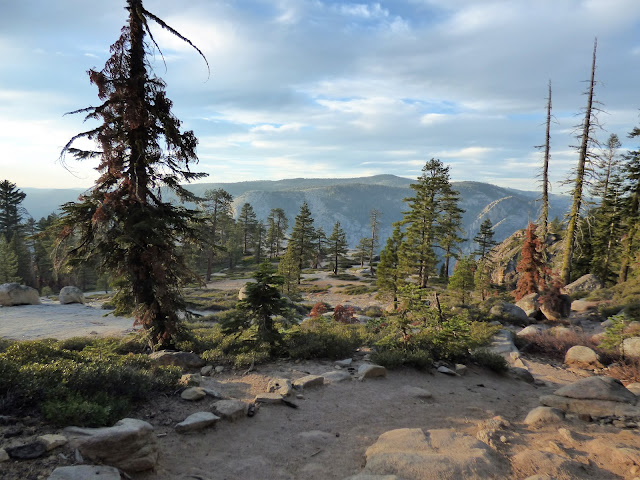 The trail breaks into the open, and one can sense the edge of nothingness that lies beyond. And then there's a distraction! There are huge open cracks near the cliff edge that split the rock for hundreds of feet. These are called the Taft Fissures, and they are a bit of evidence for the geology that led to the formation Yosemite Valley itself. The fissures follow distinct cracks in the granitic rock that makes up the cliffs in this area.

Granite forms miles below the surface as molten magma within the crust cools slowly, forming a coarsely crystalline rock. The rocks are under tremendous pressure from the overlying rock, but over time the rocks are uplifted and erosion strips away the "overburden". As the rocks approach the surface, they expand in volume, but being solid, they crack to form joints. On the scale of Yosemite Valley, the joints were points of weakness that could be exploited by flowing glaciers to carve and cut away at the cliffs. Many of the sheer cliffs of Yosemite are joint surfaces. Unfortunately, many rockfalls begin with joints that give way along the vertical cliffs. 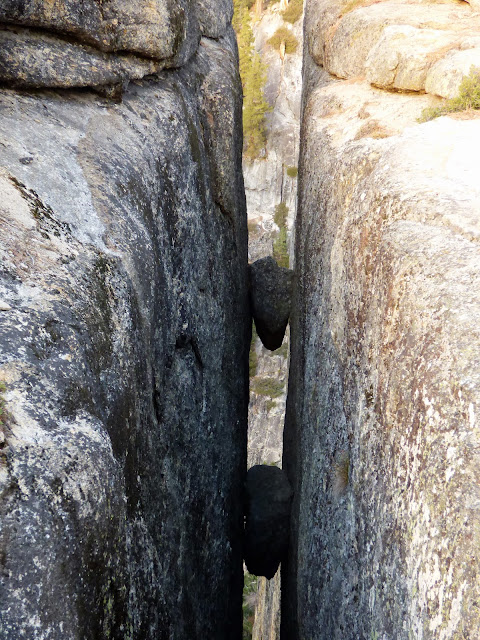 At Taft Fissures, the joints allowed water and ice to get into the interior of the rocks, causing the minerals on the surface of the rock to crumble to quartz gravel and clay dust. As the cracks widened, boulders would occasionally fall in and become wedged inside, as seen in the picture above. 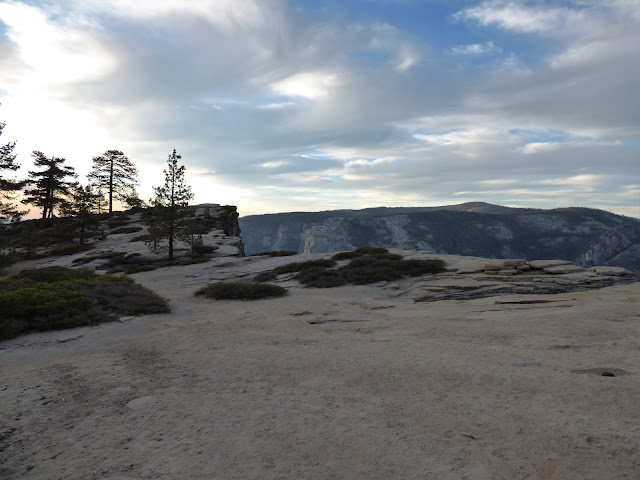 Just beyond the fissures, the world ends...the cliff edge is the beginning of a sheer 3,000 foot drop to the valley floor below. The perspective is both stunning and dizzying. It's hard to believe, but the viewpoint makes El Capitan look almost...small. It's scattered in with so many other steep cliffs. 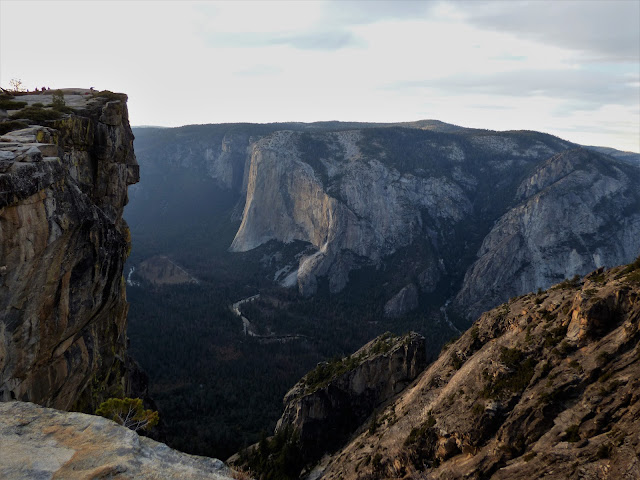 The fast-setting sun illuminated the cliff of El Capitan and the scar of the September rockfall from the cliff at Horsetail Fall. The first view in the picture above is not actually Taft Point. The point is on the upper left. I would have to head up there to get the entire view.

There are four stunning viewpoints within a short walk of Glacier Point Road. Washburn Point, seen in the last post, emphasizes the wilderness lands upstream of Yosemite Valley (and a side view of Half Dome). Glacier Point provides a look straight down into the upper end of the valley, extending from Half Dome and Tenaya Creek Canyon to the area around Yosemite Falls. Sentinel Dome provides a 360 degree panorama of the entire region, but without the dizzying look straight down sheer cliffs. It is accessed from the same trailhead as Taft Point. 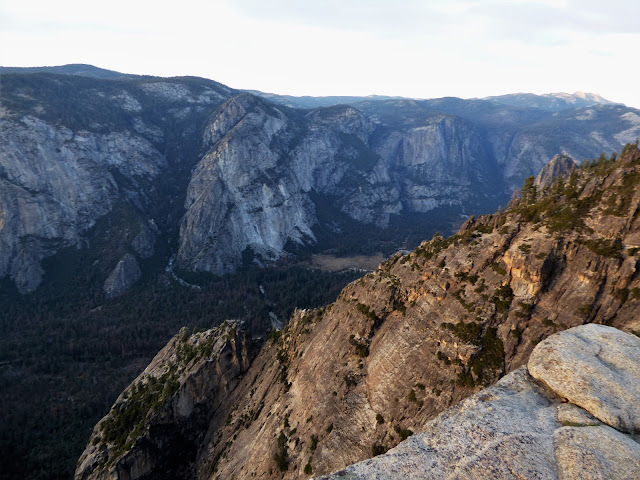 Taft Point picks up the view of the valley floor at Yosemite Falls and provides a panorama of the western parts of the Yosemite Valley, taking in the Three Brothers, El Capitan, and the Cathedral Rocks which soar above Bridalveil Falls (which are hidden on the far side). The sweeping view also takes in the western slope of the Sierra Nevada, leading down to the Mother Lode foothills and the Great Valley beyond. 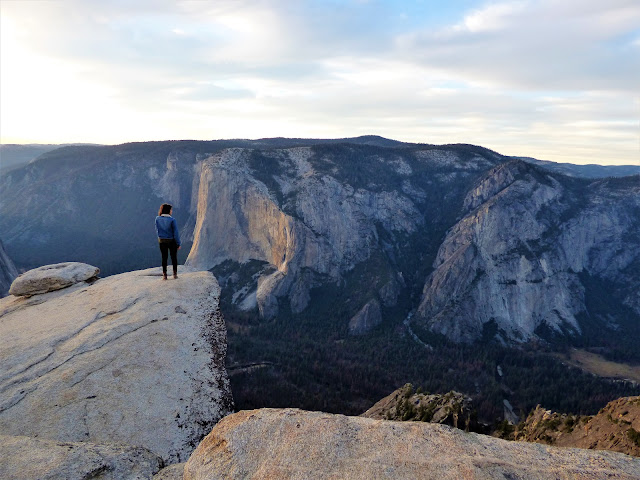 Although the rockfall at Horsetail Falls in September has garnered all the news these last few weeks, the view from Taft Point takes in a perspective on the largest historic slide in the valley, which happened in 1987. An estimated 600,000 cubic meters of rock came down the cliff of Middle Brother (on the right side of the picture above). Luckily, no one was hurt as the Park Service had shut down the road when loud sounds of fracturing rock were reported coming from the cliffs above. The September rockfall, in contrast, was a bit over 10,000 cubic meters. 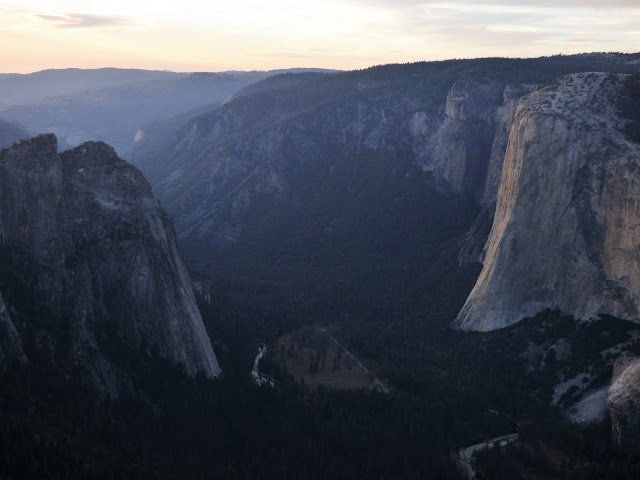 The cliff of El Capitan and the sheer cliffs of the Cathedral Rocks form a constriction in the western part of Yosemite Valley. Sometimes called the "Gateway", the rocks stand out because they are relatively unjointed, and thus were more resistant to the cutting and quarrying action of the glacial ice. The barrier even extends underground. Beneath the cliffs, the sediments are only about 300 feet deep. Farther up the valley, the sediments are around 2,000 feet deep. The glaciers at times had to flow up and over the sill of granite. 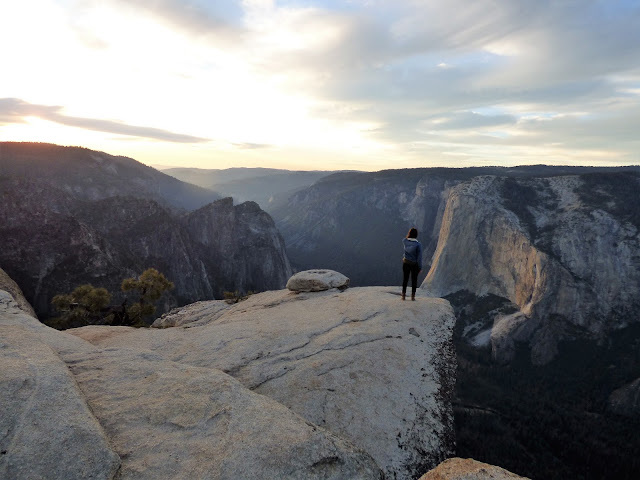 Taft Point is an amazing place. If you have a fear of heights, this will be a good place to either cure it forever, or amplify the condition to the point that you will be a whimpering mass of a nervous wreck. I don't mind looking over the edges of cliffs myself, although it will sometimes be on my belly. One never knows when one might have a fainting spell, after all. But I cannot watch others standing on cliff edges, especially if they are my students. I tell them to do their antics on their own time. 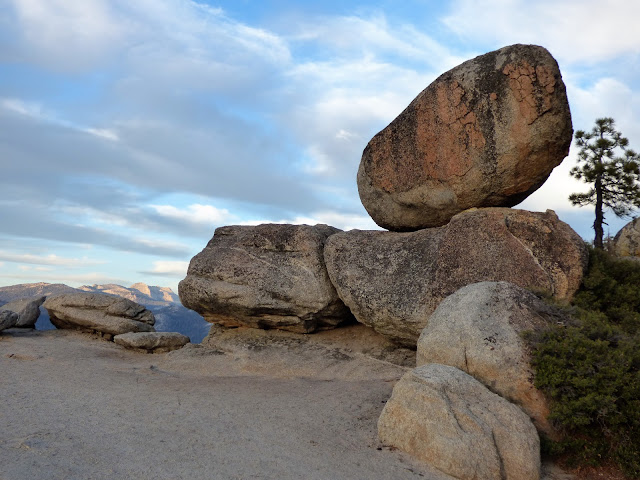 The sun hit the horizon and the sky exploded into flaming orange and pink. I quickly headed up the trail and back to the car so Mrs. Geotripper and I could have a nice dinner back down on the valley floor. It didn't matter that it was dark. The moon was up and we could still see the cliffs above, including a constellation of lights from at least fourteen climbing parties on El Capitan. 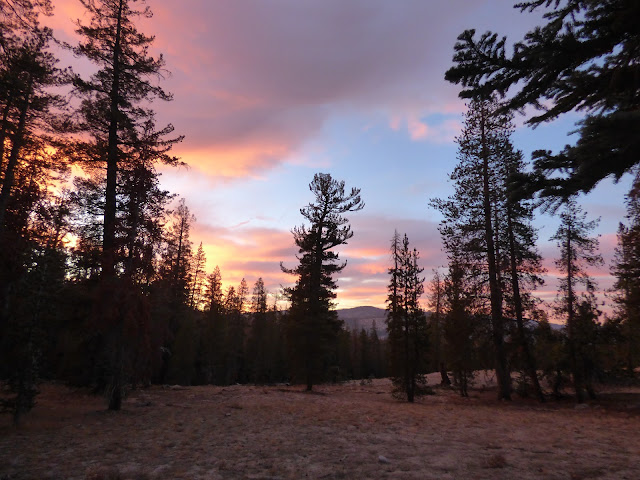