What? Why Would I Ever Want to Give Up my Parking Spot in Yosemite Valley?

"Why?", indeed. I have to admit that I get just a little tiny bit elitist at times, at least in my approach to visiting my favorite national park, Yosemite (program note: my "favorite national park" is likely to change on a nearly daily basis, depending on whichever one I happen to have visited most recently). I tend to emphasize the spots far from the madding crowd, and wow, does Yosemite get crowds. Last year included a huge spike in visitation, to five million people (the park has only exceeded four million twice). Lines at the entrance stations, lines at the parking areas, gridlock on the valley roads. If one arrives at the wrong time of year and the wrong time of day, one may be quite stuck and not see very much. 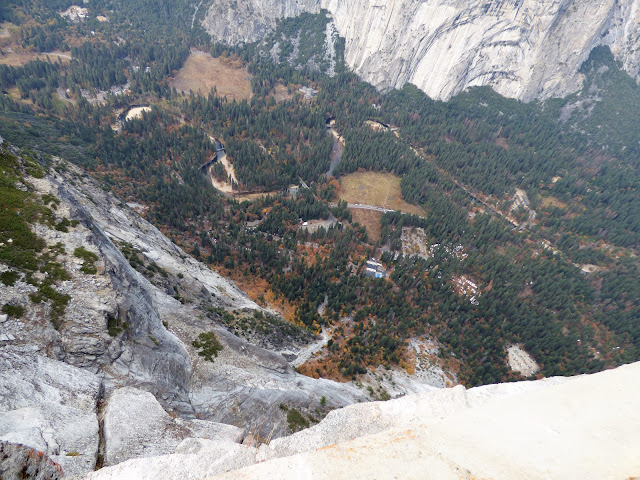 So what to say to the hapless traveler who waited for an hour or two at the entrance station, and circled the parking lots waiting for someone to leave, got into a shouting match with the person who tried to grab their spot, and finally has a chance to see things? Obviously, I am saying "go see more"! It's not enough to just see the rock cliffs from the bottom. Go to Glacier Point and get an entirely different perspective on things. I have a feeling that someone like that will not be willing to give up their coveted spot, and their time for visiting may be short anyway. And Glacier Point has a pretty good chance of being socked in as far as parking, too. The main lesson? Don't visit during the height of summer. 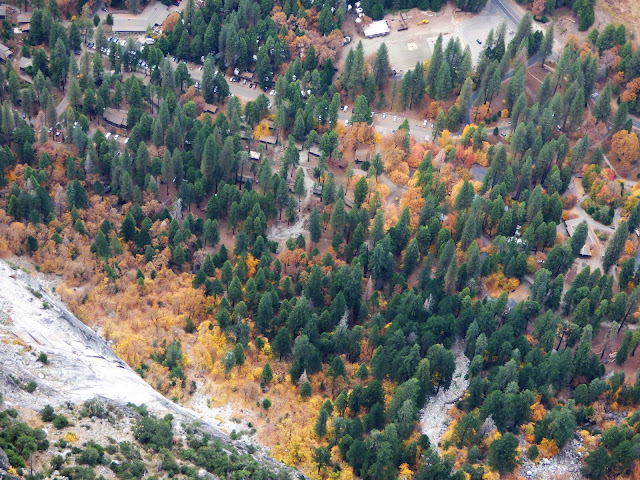 Still, there is nothing quite like seeing Yosemite Valley from above, especially from a cliff that is a sheer 3,200 foot drop straight down. It's dizzying, and exhilarating, and vertigo-inducing (that's about the same as dizzying, but only a thesaurus can describe a view like this). If you ever have the slightest chance of getting up there, go for it without hesitation (and while up there, don't miss Washburn Point or Taft Point).

My memories of Glacier Point go back quite a ways. I was here with my family around 1966 or 1967 when we watched the Firefall from the valley floor. This used to happen as the workers for the Curry Company pushed a bonfire over the brink.The embers glowed bright as they fell for several thousand feet, and it became a nightly tradition. A day or two later we were on the rim at Glacier Point where I could watch them push the fire off the cliff. It was interesting, but over the years the spectacle caused traffic congestion in the valley, and was not in keeping with the natural environment. The practice was ended in 1968. In an interesting twist, a fire fall happened naturally in the valley in 2008. A marvelous picture was captured by Edith Howe-Byrne, a photographer who spends part of the year in the valley. Check it out here. 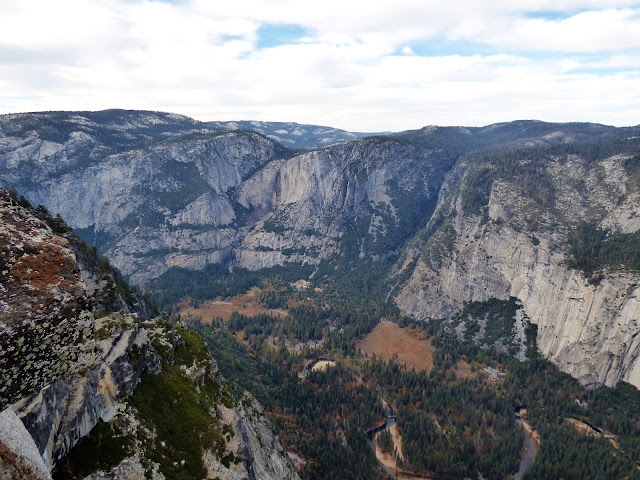 Glacier Point is perched on a cliff-top at the upper end of Yosemite Valley across from Half Dome. The view includes Yosemite Falls and the valley floor to the north (above), the glacial U-shaped valley of Tenaya Creek at the base of Half Dome (below), and the alpine country to the east. 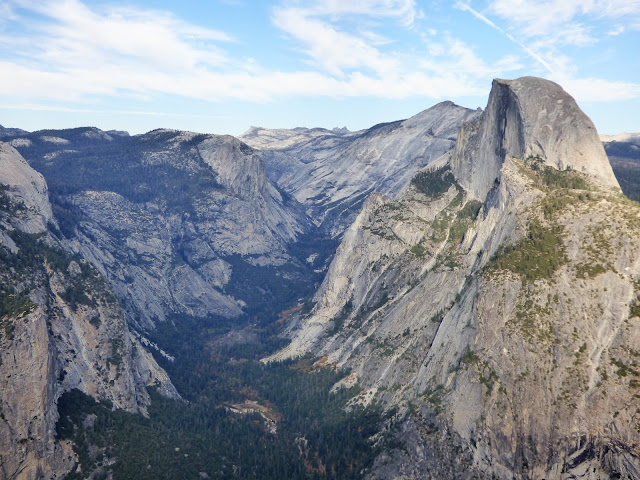 The Overhanging Rock at Glacier Point has been an iconic picture spot for a century or more. I can hardly estimate how many people have stood on, danced on, done handstands on, or pretended to be falling off of. It's outside the fencing, and thus technically off-limits, but without a ranger present people can't resist the tempting of fate. To be sure, I've stood on many a precarious rock in my day, but I have a serious problem with people who do so in such a crowded place. There's a certain peer-pressure (peer-comfort?) in seeing someone else standing in such a place leading to the thought, "if they can do it, I can do it too". Eventually you get someone who unexpectedly gets vertigo or faints. I don't know how many have fallen, but there have been a few. I cringed the other day as first one person went out, and then others climbed the fence and got their pictures too. 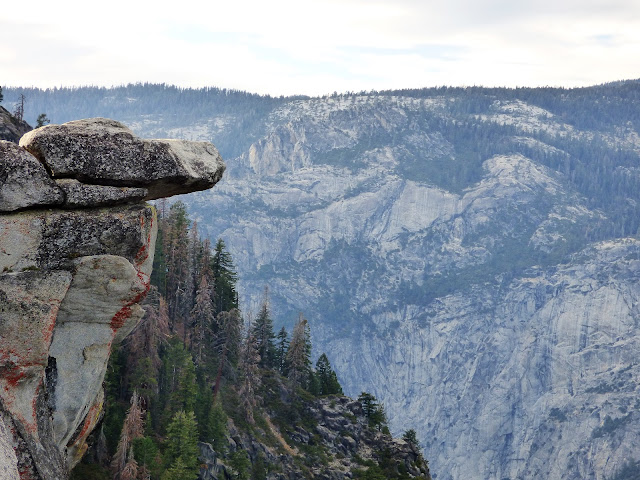 I much prefer letting the rock be part of the scenery, a nice bit of foreground for shots of the distant cliffs. I admit to taking great pains to make sure there are no signs of walls or fencing or people in my shots from the point. I like to imagine I'm the only person perched on this solitary cliff so far and distant from the hubbub below (and all around me). 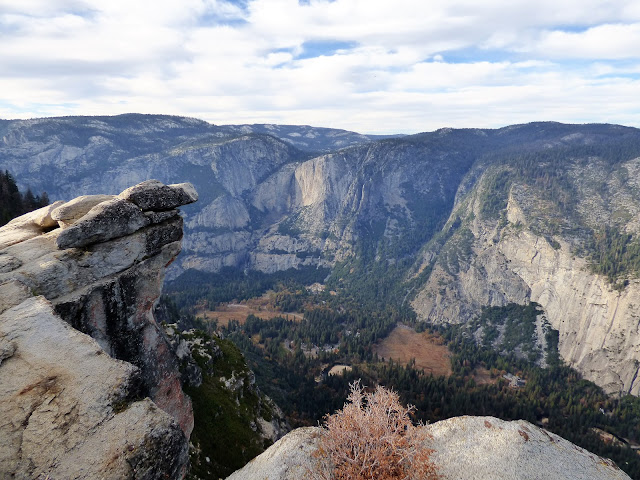 The day had been unexpectedly cloudy, and the rocks across the valley lost a bit of definition in the gloom, but shortly before we decided to leave, the sun broke through and the granite began to glow. The contrast of shadow and rock was striking. 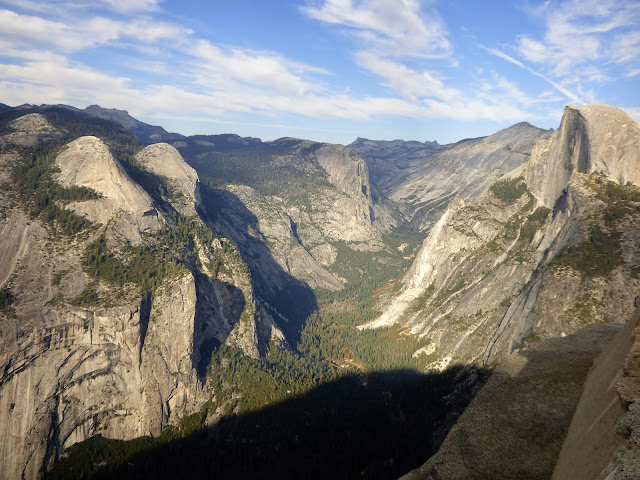 This might be one of my favorite shots of Half Dome, with both the foreground and background bathed in shadow. 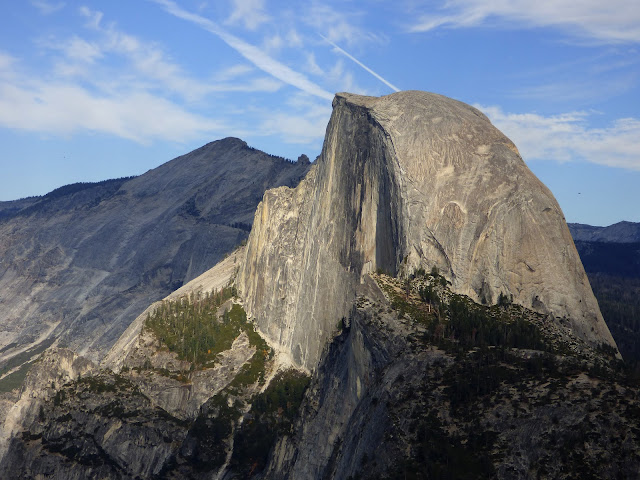 Glacier Point is accessed by Glacier Point Road, which is about a 22 mile drive from the valley floor (allow an hour to get there). The road is paved, but narrow and windy, and filled with the most dangerous animal in the park, the scared flatland driver. There is a large parking lot, pit toilets, and a modest curio/snack shop open seasonally. The walk to the view point is perhaps a quarter mile, maybe less, and is fully paved, and partly accessible for wheelchairs (mainly the upper viewpoint). A number of trails start from the point as well.
Posted by Garry Hayes at 1:11 AM

That is a wonderful shot of Half Dome. "The most dangerous animal in the park" was hilarious.

Looking at our beautiful pictures, it reminds me that at age 4 1/2, I hiked from the Valley to Glacier Point with my baby brother and parents.