Why did the Road Cross the San Andreas Fault? 15 Years of Geologic Change (an Update)

I've been leading geology field studies trips to lots of places in the American West for 29 years and started to take digital pictures in 2001. I sometimes struggle to find new things to photograph when I visit a place for the 29th time, but in some cases it is not a problem. There are geologic changes that happen on a yearly basis, and with fifteen years of photos, the changes become obvious. This is a continuing update from a post in 2013, and I'll probably continue updating for the foreseeable future.
Highway 25 in the California Coast Ranges connects the town of Hollister with the access road to Pinnacles National Park (formerly Pinnacles National Monument). Along the way the highway crosses the San Andreas fault in a section where the fault creeps an inch or so each year (36°35'54.27"N, 121°11'40.19"W). Most years we've stopped to have a look at the effect the movement has on the pavement. In 2002 and 2004, the damage was obvious.
By 2008 someone had patched the road, and no fault motion was evident.
Little damage was evident in 2009 either. But by 2010 cracks had begun to appear as the fault stressed the pavement.
The fact that the fault creeps in this region is a good thing. It means that stress is not building along the fault surface, but instead is being released gradually. The sections of the fault to the north and south of the creeping section are locked by friction, and are building up the ominous stress that will eventually produce quakes with magnitudes in the range of 7.5 to 8.0. The quakes are coming and we need to be as prepared as possible.
By 2012, the road had been completely repaved, and  yet the shearing was already evident.
It became even more pronounced by 2013 and in 2014. Just by chance, the person working as a scale was the same individual as in 2004.

In 2015 the fractures were moderately larger. They'll need to start thinking of road repairs before long.
In 2016 Laura once again provided scale, as she did in 2014, and 2004.
Here in 2017, long-time trip volunteer Mary provides scale. The cracks in the road are just a bit larger, but they didn't look appreciably different than the previous year except for a twist (pun intended)...
The paint on the road was obviously offset, a lot more than last year. Even more interesting is the despite the offset, the paint was deformed (twisted), not split. 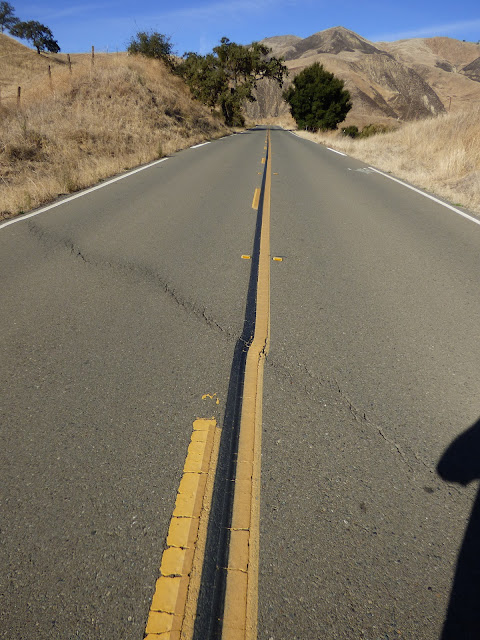 The offset paint strip reminds me of illustrations of elastic rebound theory, the idea that stress builds up on a fault line over time. In that model, the land on either side of the fault is distorted over time until the frictional resistance is overcome and the rock snaps back to its original shape. That won't be happening with the paint, but if they don't repair the road (as they often do; see above), it will probably show a clear break by next year.

The other "twist" is that a magnitude 4.6 earthquake took place last week less than two miles from the road crossing. It probably did little to change things on the road exposure, but serves as a reminder of the need to not be complacent about the existence of this fault in our state. 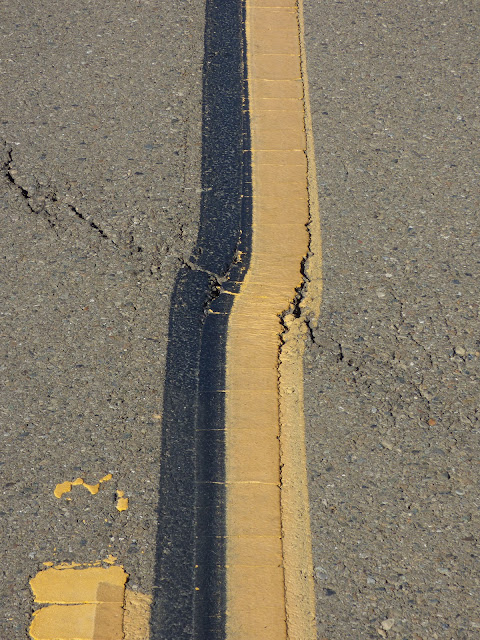 These little changes that happen at a rate visible in human lifetimes add up to huge changes when multiplied by thousands or millions of years. The nearby eroded volcano of Pinnacles National Park has been displaced 195 miles (315 kilometers) in the last 20 million years or so by movement along the San Andreas.

Until next year!
Posted by Garry Hayes at 10:35 PM