It Seems That Half the Volcano is Missing: Travels at Pinnacles National Park 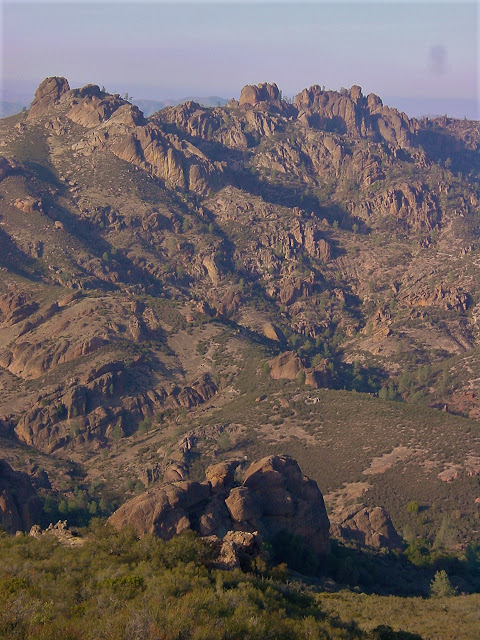 Sixty or seventy years ago, the San Andreas fault didn't exist. Well, it existed, but not in the way it exists for those of us in California today.  It had been named only in 1895 after a valley and reservoir on the San Francisco Peninsula by Professor Andrew Lawson, and it was only after the disaster of 1906 that it was recognized to be a feature that extended for hundreds of miles into southern California. Although the earthquake produced clearly defined lateral motion amounting to as much as 20 feet along a fracture running for 200 miles, it was still considered to be a fault with primarily vertical motion. The reason? Some meteorologist named Alfred Wegener was stirring up controversy in the geological world by claiming that continents drifted across the face of the planet. Geologists knew this was impossible, and therefore the idea of large-scale horizontal motion along fault zones was highly unlikely.

Still, geologists kept finding stubborn little problems with the assumption of vertical motion. Levi Noble suggested in 1927 that the fault in southern California had shifted some Cenozoic sediments around 26 miles. The idea was controversial. Robert Wallace produced even more debate, suggesting in his Ph.D. thesis that a portion of the fault in the Mojave Desert had been shifted 75 miles sideways.
The real shocker came just a few years later in 1953 when Thomas Dibblee Jr. and Mason Hill published an explosive paper in the Geological Society of America Bulletin. Thomas Dibblee Jr. was recognized for his amazing ability to map large swaths of central and southern California (see the map below). Mason Hill had developed a reputation as a finder of oil using geological methods (strangely, prior to the 1920s oil companies had little interest in employing geologists; that changed quickly). They worked together for a number of years for the company that became ARCO, mapping out structures in the rocks near the San Andreas fault in Central California. In time they began to recognize that there were similarities between rocks on opposite sides of the fault, but offset by dozens, even hundreds of miles. Their paper documented the amount of offset (up to 320 miles!), and preceded other discoveries at the time that suggested that "continental drift" (actually plate tectonics theory) was in fact how the planet was working.
Although their main conclusions were eventually accepted, their idea was hobbled by the lack of a "piercing point", a geological feature that crossed the San Andreas fault with a sharp boundary that would allow precise measurement of the total offset along the fault. Although their correlations were sound, there was some uncertainty about just how much the fault had moved.
Although it was right there on the state geologic map, few people seemed to notice that there was a little dot of volcanic rocks on one side of the San Andreas fault, and another 195 miles north along the fault on the other side of the fault. The rocks were broadly of the same age and general composition, but no one had carefully mapped them, and even more importantly, compared them. It fell to Vince Matthews III in 1976 to do the work. He found striking similarities between the two rocks sequences, the Pinnacles Volcanics, and the Neenach Volcanics (below). A good piercing point had been found! The San Andreas fault had slipped sideways a total distance of 195 miles in 23.5 million years.
And that brings us to the subject of this post, Pinnacles National Park. Established recently, in 2013, it had actually been declared a national monument in 1908 by President Theodore Roosevelt. Of course no one in 1908 knew that the spectacular spires and peaks were only half of a volcano, or that the volcano had been shifted 195 miles from its original location in Southern California. But it was known that the mountains were far different than the "usual" low ridges and valleys of the Coast Ranges. They stood out. (NOTE: I'm sorry for the black font that follows. I don't know how it got there and I don't know how to remove it...)
Pinnacles National Park is a fascinating place to visit for many reasons. It was once a stratovolcano (composite cone) composed of andesite, dacite, and rhyolite standing perhaps 8,000 feet above sea level. It had at least five eruptive centers, which would have given it a less symmetrical profile than peaks such as Fujiyama or Mt. Hood. Perhaps a good analog that can be visited today would be the lumpy edifice of Mammoth Mountain, that of the famous ski area in the eastern Sierra Nevada.
The volcanic rocks are fairly resistant to erosion, but are riddled with joints and fractures that allow water (and sometimes ice) to get in and weather the minerals to clay. Mass wasting does much of the rest, causing gigantic boulders to slide, tumble and fall into the adjacent valleys. In some cases the boulders were so thick that they covered the bottom of the canyon, forming some fascinating talus caves. We explored the Bear Gulch Caves during our recent field studies to the park. The CCC built a trail and stairway through the cave, leading to an experience akin to the Fellowship of the Ring exploring the Mines of Moria. There is even a modest underground waterfall. At the end of the caves, one more stairwell climbs the rock wall to the modest Bear Gulch Reservoir, also built by the CCC. 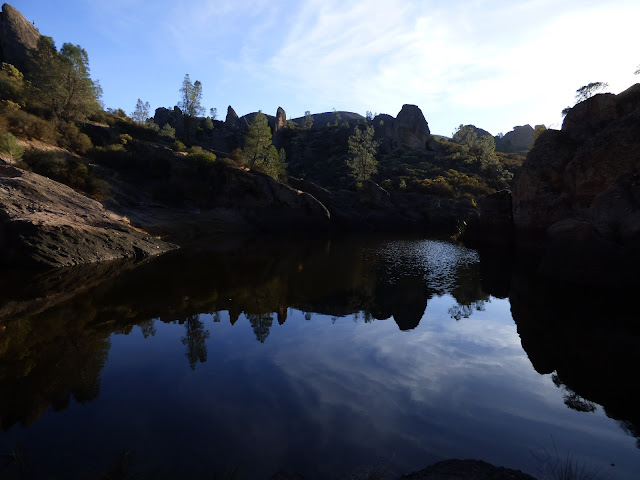 There are miles of other trails in the park, including the High Peaks Trail that must not be missed as long as your phobia of heights is held in check. It is a marvelous 5 mile loop that provides awesome views. Other trails explore the sycamore woodlands along the streams. There are several visitor centers and a campground. If you pay close attention, you will see California Condors soaring in the skies above. 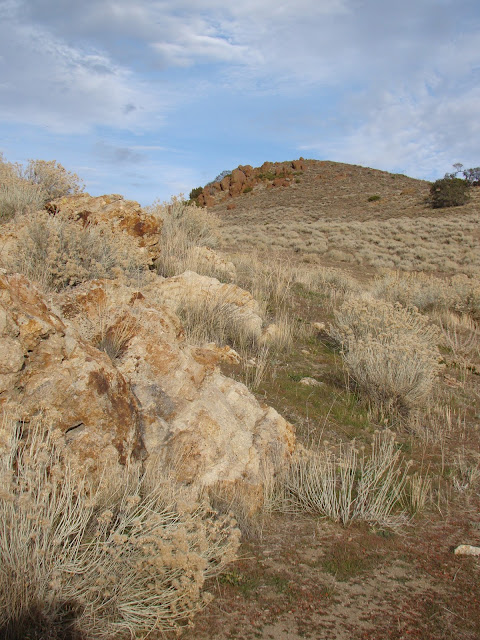 In case you are wondering, the Neenach Volcanics are not nearly as dramatic as Pinnacles. They are exposed at the edge of the Mojave Desert relatively close to the Antelope Valley Poppy Preserve. I stopped there a few years back and got a couple of pictures and some rock samples. It's kind of neat to pull out the tray of Neenach Volcanics samples during our field trip and do a visual comparison with the Pinnacles rocks. We end up bringing the sundered volcano back together in a small way... 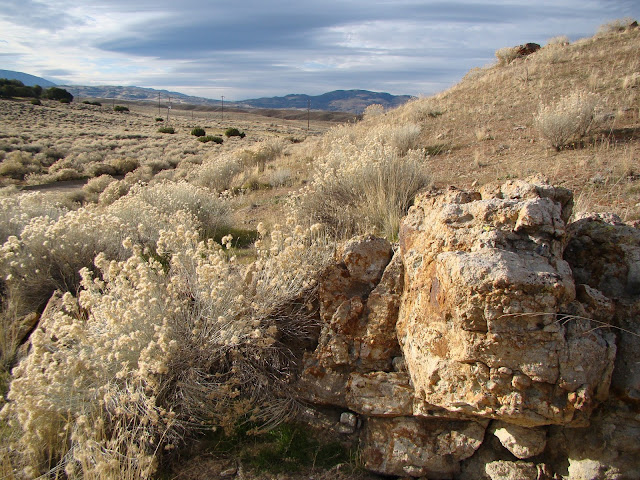 Matthews, V., III, 1976, Correlation of Pinnacles and Neenach volcanic formations and their bearing on San Andreas fault problem: Bulletin of the American Association of Petroleum Geologists, v. 60, no. 12, p. 2128-2141.
Posted by Garry Hayes at 8:56 PM

Is there an explanation for why the Pinnacles half is so dramatic and the Neenach half is barely noticeable? I wouldn't imagine the Neenach half was more eroded, at least not recently due to the arid climate. But as you've taught me, time changes everything. Was Neenach eroded in a more wet climate in the past?

From what I understand, the rocks of Pinnacles sank into a fault valley (graben) fairly soon after they were separated from Neenach which protected them from erosion. This didn't happen at Neenach, so those rocks have been undergoing erosion for a long time. The Gabilan Range was uplifted just within the last 2-3 million years so the erosion is much fresher and more rugged. That's how I understand it anyway.