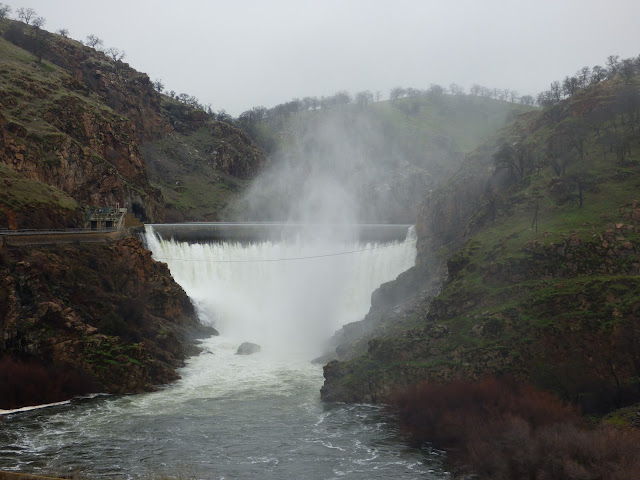 Sometimes you just have to say "what the heck?" (or some other expletive). Some things just grab your attention that way. This was my day to say that. I was privileged to see a rare sight. 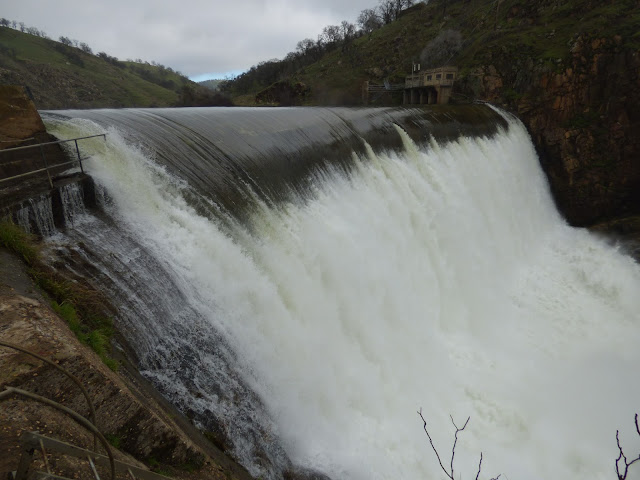 I was given the opportunity to accompany some MID employees on an inspection of La Grange Dam. And it was no normal day. We are in the midst of the storm runoff that has the entire Tuolumne River flowing over the rampart of the dam. You are looking at 7,000 cubic feet per second flowing over the brink of a dam 200 feet wide, and 131 feet high (Niagara Falls is only 36 feet higher). It was an astounding sight. 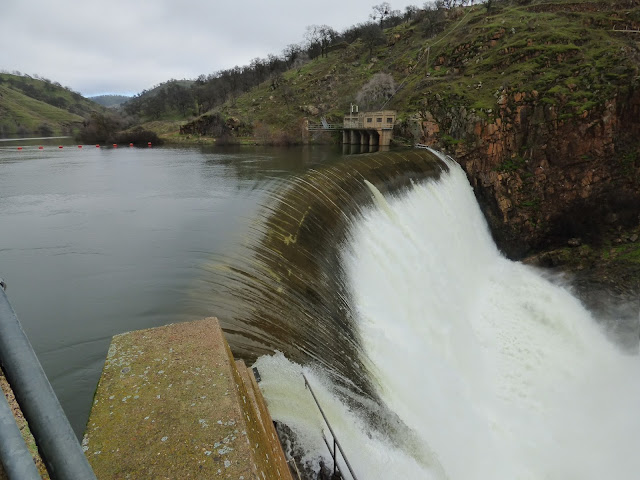 La Grange Dam is located on the Tuolumne River about two miles downstream of Don Pedro Dam. It was built in 1893 to divert the Tuolumne into the irrigation canals of the Turlock and Modesto Irrigation Districts. Most of the time the river does not flow over the lip of the dam. If the water isn't going through the canals, it is piped to the 4 megawatt powerhouse a short distance downstream and released back into the river channel. It's only during major runoff events that the dam overflows in this fashion.

The dam has a unique structure, being composed in large part of locally quarried metamorphic rock blocks (about 25% of the volume of the dam). The rugged texture of the dam face is distinctive. The rest of the dam is composed of concrete. It holds back a mere 500 acre feet (in contrast, Don Pedro Reservoir upstream has a capacity of 2.04 million acre-feet). 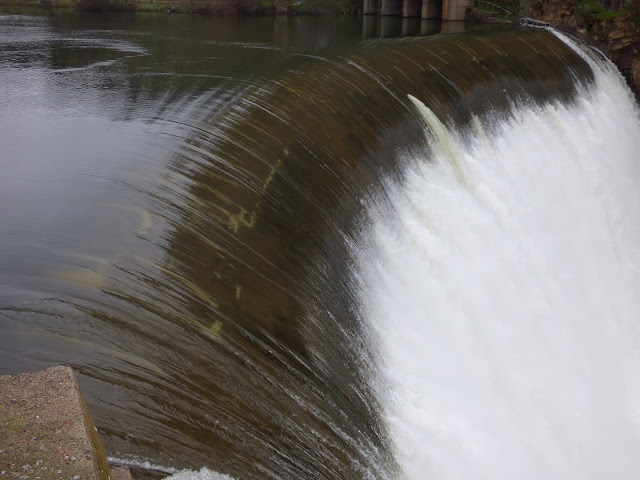 Access to the dam is severely restricted, and the reasons are obvious. The cliffs and slopes around the dam site are dangerously steep, and there are no facilities of any kind. 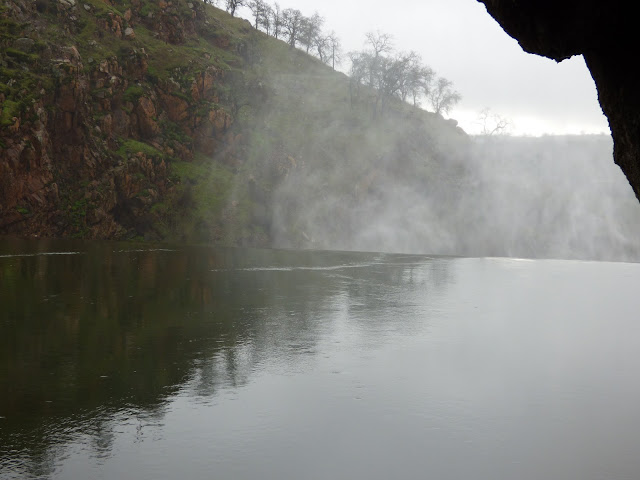 We walked through a tunnel and got a perspective of the dam from just upstream of the brink (above). It was certainly quieter, but all the more menacing. I was imagining the sudden concern of an errant kayaker realizing that something was amiss just ahead. 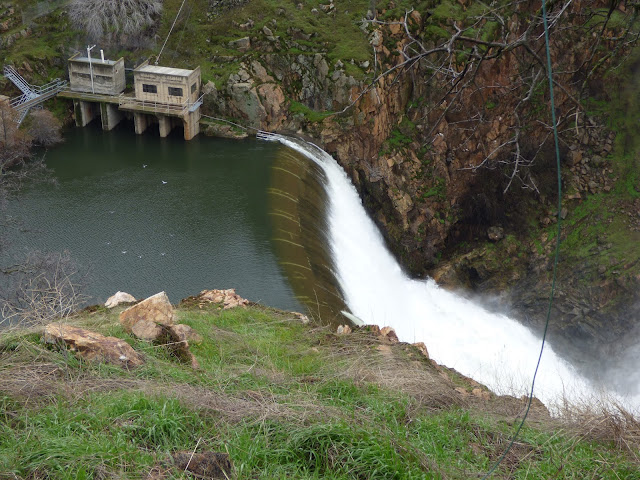 We climbed to the top of the hill overlooking the dam for a broader view of things. 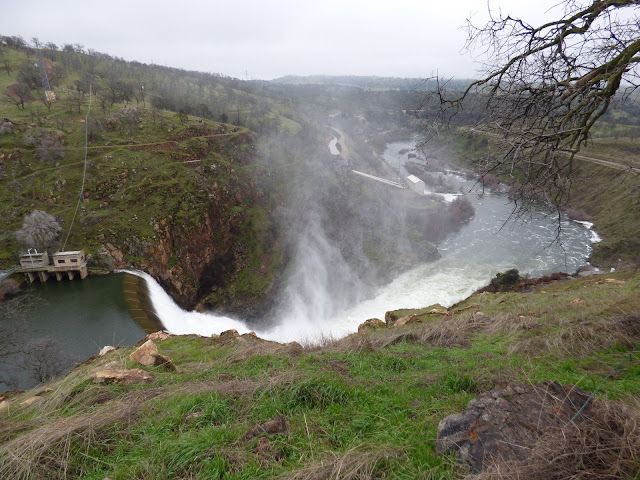 One can see the remains of a much older irrigation canal on the hill to the left (south) side of the dam. It dates to the Gold Rush days. 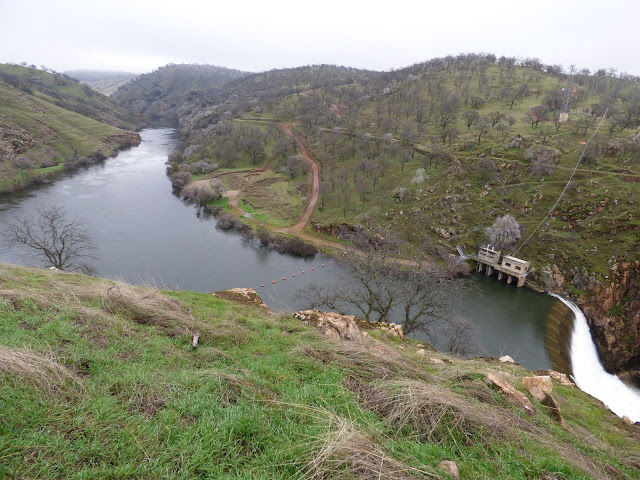 This has been an extraordinary week, with the greatest storm to hit California in twenty years. I've seen some incredible sights in my corner of the world (I've been covering events on the Merced, Tuolumne, and Stanislaus Rivers. But of all the strange new things I've seen, this was in many ways the most stunning. I appreciated the opportunity to witness the deluge. 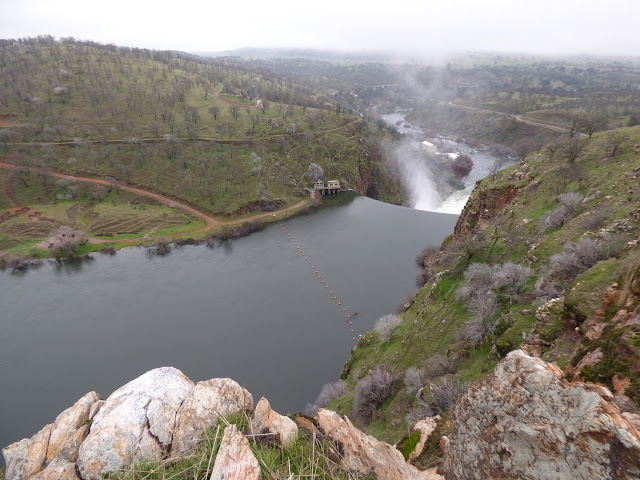 Hey! from the East Coast (DC), where patterns have been different, too. When you talk about the rivers of storms there, what I see here is slower-moving systems, so we too get periods where it rains for longer periods than the 'normal' of my 60 years. I find it fascinating, but I fear for the uncertainty my kids are going to have to live with. Keep on...