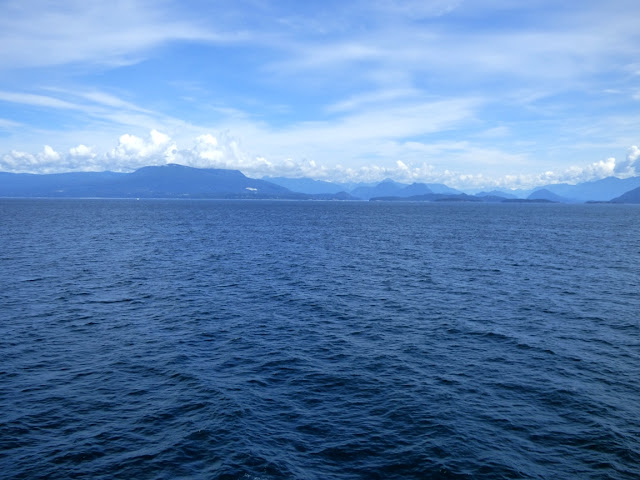 One of the nice things about vagabonding, traveling without a set itinerary, is that one can make allowances for weather. That's a major consideration with a journey through the Pacific Northwest. We stayed an extra day on Vancouver Island, letting a weak storm pass through the region, because I couldn't stand the thought of missing out again on seeing and exploring an extraordinary place, the southernmost fjord in North America.

We missed seeing much of the landscape in and around Howe Sound last year because we were traveling with a large group and had a precise schedule. An unusually powerful summer storm hit the region  as we traveled through. It caused flood damage across British Columbia and Alberta, but we mainly saw rain and very cloudy conditions. Needless to say, I was disappointed. Extremely, teeth-gratingly disappointed. My choice of travel locales on this trip was governed largely by the desire to see Howe Sound and the Sea to the Sky Highway between Vancouver and Whistler. 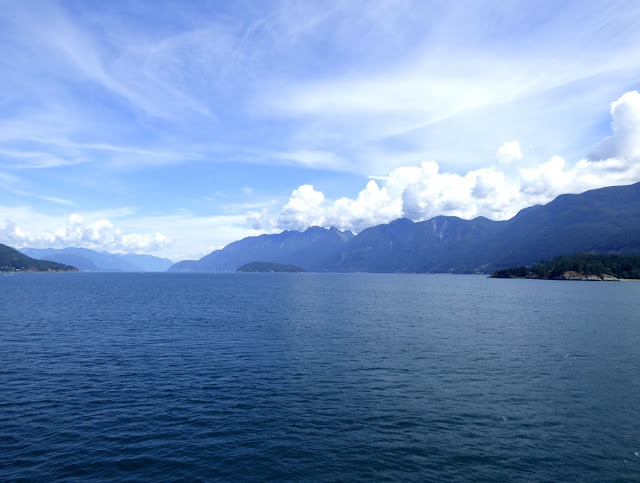 I reveled in the beauty of the storm-free weather as we boarded the ferry from Nanaimo on Vancouver Island to Horseshoe Bay in Howe Sound on the mainland. The water was sparkling in the sun, and views were practically unobstructed in all directions. We crossed the Strait of Georgia, the northern arm of the Salish Sea, and entered the mouth of Howe Sound. It was my first time seeing a glacial fjord (even though I was there the previous year).

A glacial fjord is simply a drowned glacial trough, a long coastal inlet that is lined by steep cliffs. Glaciers can erode valleys below sea level if the ice is thick enough, but many fjords formed by flooding caused by the rise of sea level that followed the end of the last ice age. The term is Norwegian, and of course Scandinavia is famous for spectacular fjords. But Howe Sound is no slouch when it comes to incredible scenery. And there's a hint of danger, too... 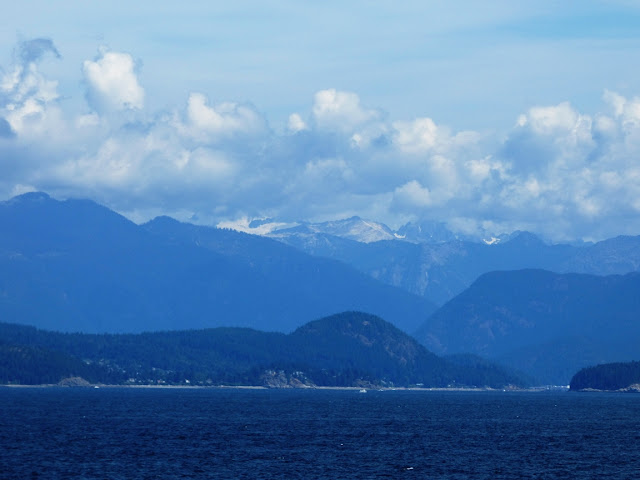 The hazards of living along a subduction zone change as one travels inland. We were now the width of a huge island and a large strait from the trench, so the direct shaking from gigantic earthquakes offshore would be somewhat lessened. But rockfalls and tsunamis would still have to be considered threats. Some tsunamis could even be generated within the fjord by rockfalls. In 1958 at Lituya Bay in Alaska, a quake-generated rockfall produced a gigantic spash that erased trees, rock and soil from the opposite slope to a height of 1,720 feet (520 m). The tsunami moved seaward with heights of between 100-300 feet, removing entire forests and killing several people unlucky enough to be in fishing boats at the mouth of the bay (although several survived the wave and provided eyewitness accounts of the extraordinary event).

The existence of several important transportation corridors, both rails and highways, in Howe Sound has highlighted the dangers of mass wasting. There simply isn't much in the way of flat ground for the placing of rails or asphalt, so engineering problems abound. The original two lane highway was widened and straightened to ease traffic during the 2010 Winter Olympics. Problems with falling rocks and debris floods are constant, with an average of 405 events each year, and a death toll (since 1906) of 50 lives, although 37 of them were due to a single event, a horrific debris flow in 1921. 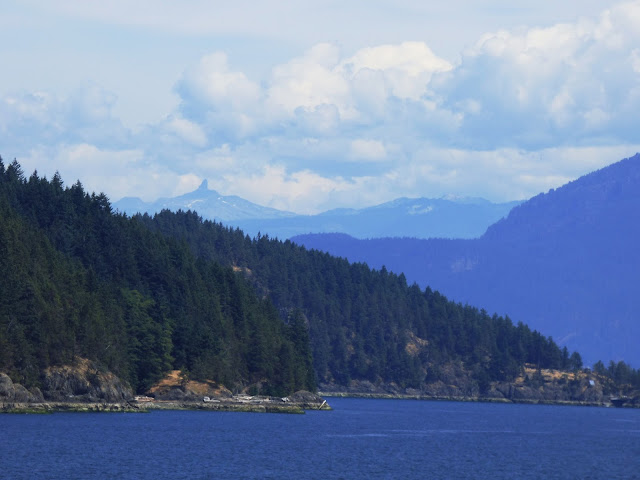 The other threat is volcanism. The slab of oceanic crust that is subducting off the coast carries water into the Earth's mantle, and a series of reactions lead to the melting of crustal rock. The magma rises to the surface, erupting out and forming a chain of volcanoes called a magmatic arc. Here, in British Columbia at Howe Sound, we were near the northern terminus of the Cascadia arc, and I was particularly anxious to have a look at Mt. Garibaldi and the Black Tusk. I had a brief view of the "tusk", an eroded cinder cone, as we sailed into the sound. There will be a bit more on the volcanoes in a future post. 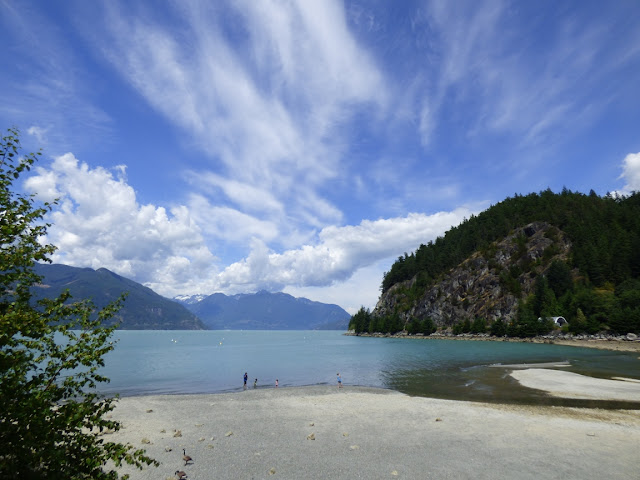 We drove up the narrow highway and made a brief stop at Porteau Cove Provincial Park. We stopped there last year, but mostly had a view of some rocks up close, and fog. On this day, we had a dramatic view of the sound, and the surrounding glacier-covered peaks. 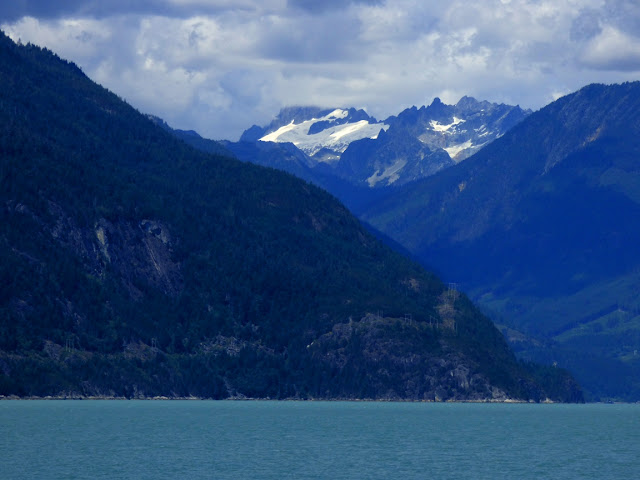 The water had changed from a dark blue to a turquoise hue. The reason had to do with the glaciers on the high peaks above us. As the ice grinds away at the rock, a fine silt/clay material results, and is carried in the meltwater to the sound below. The finest clay particles can remain in suspension for weeks or months, and that is what produces the unique color of the water in the upper part of the sound. 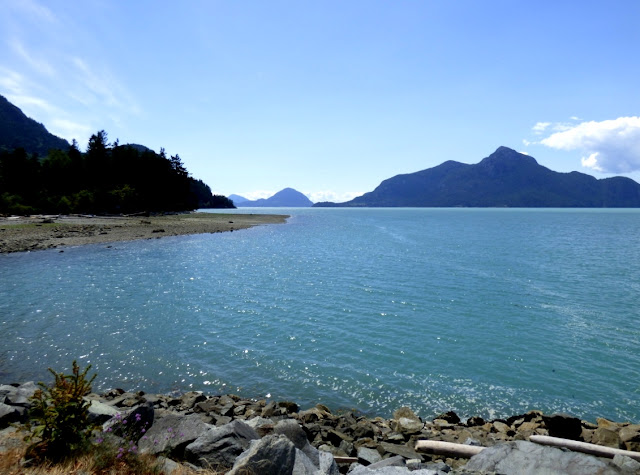 The main trunk glacier that produced Howe Sound was able to cut far deeper than the smaller tributary glaciers, so the side canyons ended up perched high up on the rim of the main valley. Shannon Falls is an example of one of these hanging valleys. It makes a dramatic cascading drop of  1,100 feet (335 meters) onto the valley floor at the head of the sound. 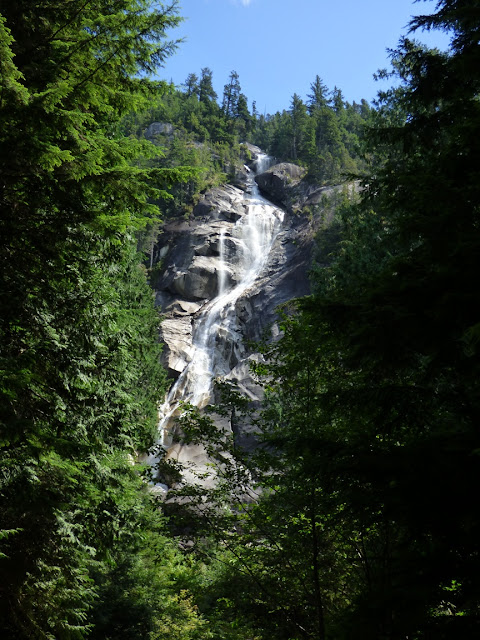 We reached the upper end of Howe Sound at the town of Squamish, and started the grade up into the mountains at Whistler. At a roadside viewpoint, we stopped and looked back at the head of Howe Sound. It was a much different place than the one we saw last year! 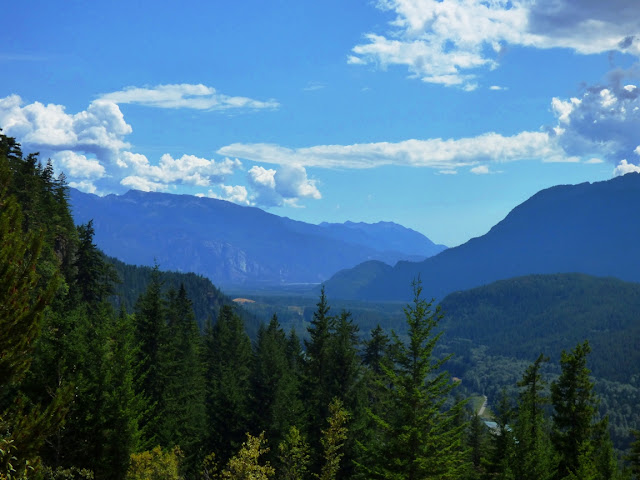 In case you were wondering what we did see last year, here is a shot from Porteau Cove in 2014. 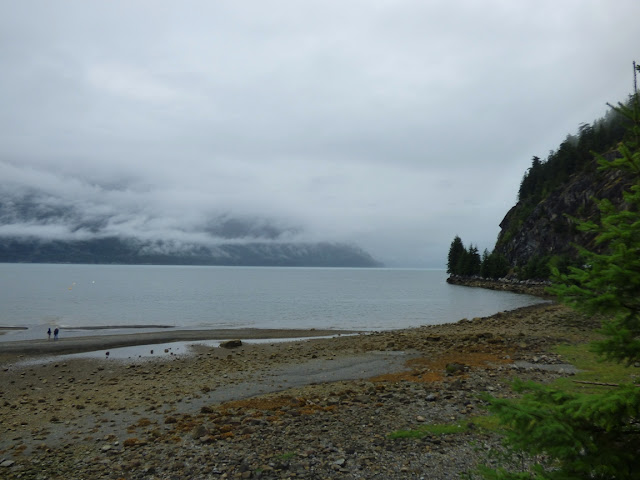 And this was Shannon Falls in 2014. The fog had lifted a bit, so we actually saw the falls back then. I was struck by how feeble the falls were this summer. The drought extends far beyond California... 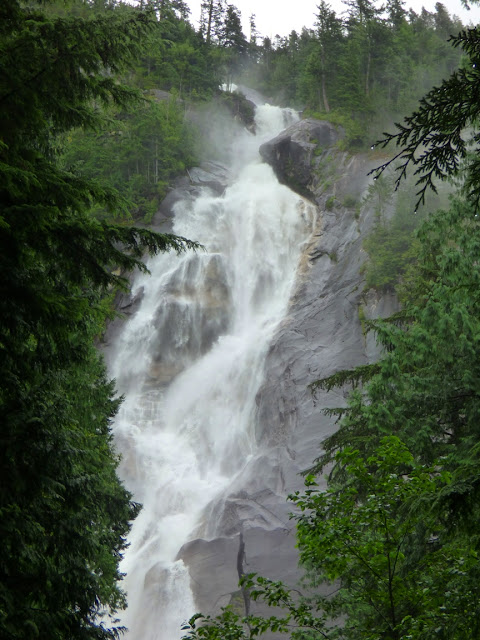 I think there is another fjord farther south in BC, and you visited it at Butchart Gardens. Saanich Inlet is classified as a fjord and south of the 49th parallel.

Love the trip reports and learning more about the area I grew up.

But, but, the internet said...

Well, I got to see that one too. I suppose a technicality would say that Saanich Inlet is on an island, not the continent. But thanks for the correction!

The Hudson River flows in a magnificent fiord around the 41st parallel.

Thank you for the education and fascination your reports provide.

Thanks! The definition of 'fjord' varies. Some include only those bays connected to the sea, and others include inland lakes and rivers like Lake Chelan in Washington.

I drove from Squamish to Whistler in 1986 on my own soujour at the time of the Vancouver World's Fair. I've been on some absolutely awful roads in my day. Driving down the north side of Mt Lemmon north of Tuscon on a Jeep track but with a 1973 Ford LTD. That road cut into bare rock on the far eastern side of the Great Smokey Mtns National Park. But that road up to Whistler simply kicked my butt. About half-way up going over the stairsteps the road seemed to follow every nuance of the topography and twisted more than any roller coaster. Maybe I'll have to go back!