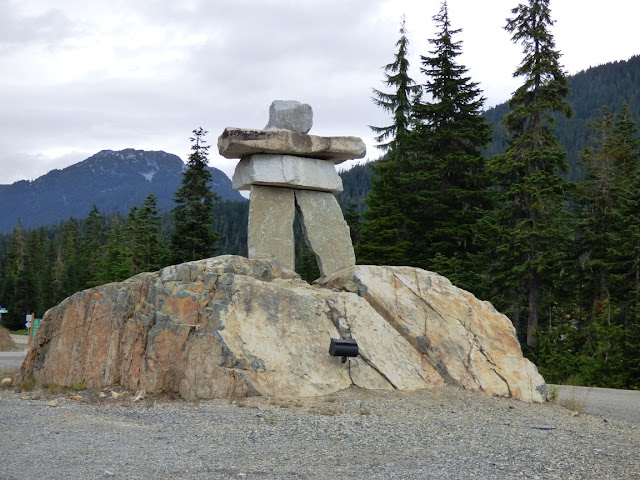 A stone person stands on an outcrop up in Callaghan Creek a few kilometers west of Whistler in British Columbia. It has been called an inuksuk, although inunnguaq may be the more proper name (it's the difference between "something which acts for or performs the function of a person" and "imitation of a person"). The far north can be a featureless landscape with little in the way of landmarks, so the First Nation people like the Inuit used stone cairns for navigation and travel routes, and as signs for fishing sites, camps, hunting grounds, or places of spiritual importance. It is unclear if the human forms, the inunnguat (the plural form of the word), were used much prior to European colonization. 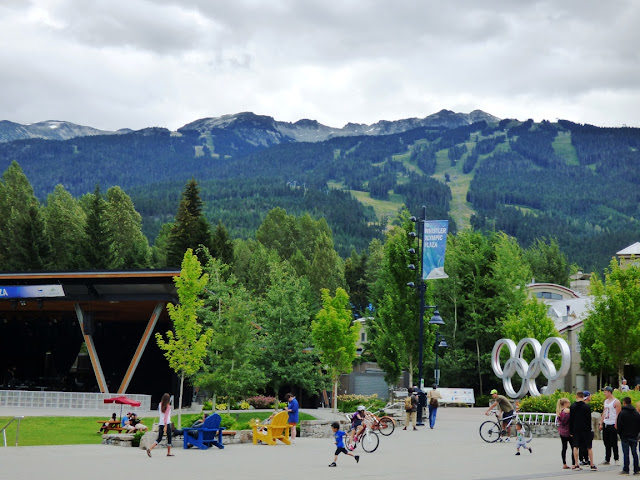 We were in Whistler, British Columbia, on our recent vagabonding adventure through the lands influenced by the Cascadia Subduction Zone, a place you may remember as the site of the 2010 Winter Olympics. Reminders were all over the place, including the rings and stage in the center of town. The slopes are covered with ski runs, and the highway from the coast, which we mentioned in a previous post, was widened and straightened, despite the ongoing threat of mass wasting.

The inunnguaq stood at the entrance to the Olympic venue in Callaghan Creek where the ski jump and biathlon events were held, and indeed, an inunnguaq was used as the symbol for the games in general. Now, I've loved the symbolism of the inunnguaq, and lots of my souvenirs of Canada include the image. But I've come to understand that it was of some concern to the First Nations people of Canada. It could be considered a sign of respect for the original people of Canada, but it could also be interpreted as a bit of cultural appropriation.

Some noted that the actual historical inuksuit (plural) rarely if ever took a human form. That practice may have not begun, as noted above, until European colonization. Others argued that the inuksuit were used by arctic First Nation peoples, whose lands were hundreds, even thousands of miles away from the Olympics site. I can see this as being the same as using a tepee as a symbol for the Los Angeles Olympics even though tepees were used by nations on the Great Plains, a thousand miles or more away. It's conceivable that a better symbol might have been a Thunderbird, a cultural icon of the Coast Salish people, especially since two prominent volcanic peaks in the Whistler area were seen as the perch for the animal (the Black Tusk, and Mt. Cayley, discussed below). Now, I'm no sociologist or anthropologist, and I certainly don't live in the region, so I'd love to hear some perspectives from those who are close to the issue. 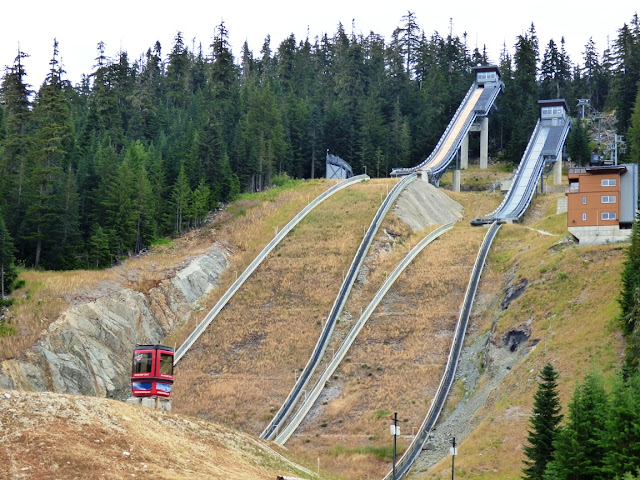 But I loved seeing the ski jump! I've never seen one before in person, and I can say without any doubt whatsoever that you will never see me wearing skis on something like this. It is steeper than it looks, and I grew up watching that iconic crash from ABC's Wide World of Sports (the "agony of defeat"). It's still in use for training, but obviously not this time of year. 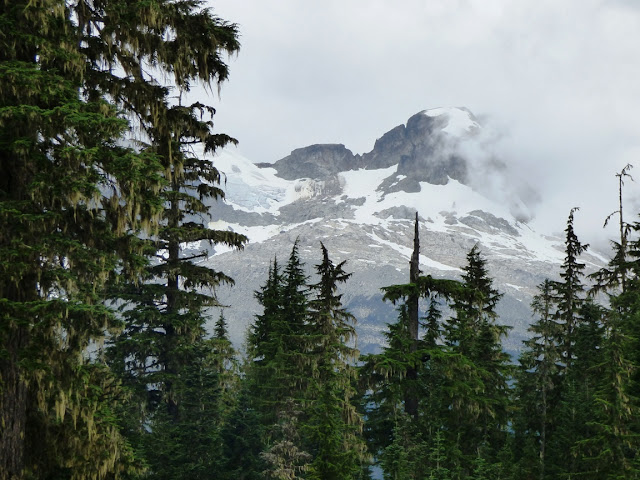 I would love to say that I fully research the landscapes that I explore beforehand, but this was vagabonding. I didn't know, other than a vague goal of reaching Canada, that we would make it as far as Whistler, and so I didn't look into the geology of Callaghan Creek where the Olympic venue was located. It turns out that the reach of Cascadia is more than I realized. There are several lesser-known, but potentially active volcanic centers to the north of Garibaldi. These include the Bridge River Cones, Mt. Meager, possible the Silverthrone Caldera, and across the valley from me at that moment, the Mt. Cayley Volcanic Field.

The main peaks of the volcanic field were hidden in the clouds (now there's a Pacific Northwest surprise), but we could see some of the glaciers that have formed on the flanks. The Mt. Cayley field has not erupted in some time, maybe 200,000 years, but hot springs and earthquake activity indicate the presence of magma beneath the complex. The Mt. Meagher field to the north erupted just 2,400 years ago. 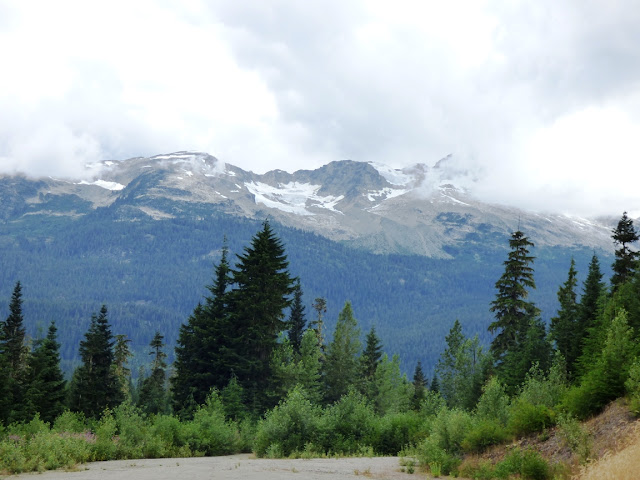 The glacier between Metal Dome and Brandywine Mountain shows the state of the drought conditions this year and the ongoing loss of glacial ice in general from global warming. It was July, a time when a fair amount of snow should still cling to the peaks, but most of the ice visible is a dirty gray color. The gray is the old glacier ice, no longer hidden and protected by an insulating blanket of white snow. So the melting that is taking place is from the glacier itself, and these glaciers have been receding at an accelerating pace for decades now. 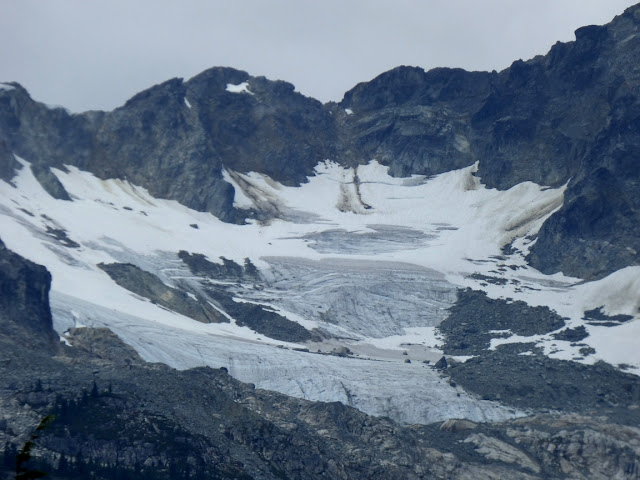 There weren't a lot of flowers out and about, but there were some beautiful ones here and there. No, I don't know many flower names. I'm a geologist, after all. They cover rocks. 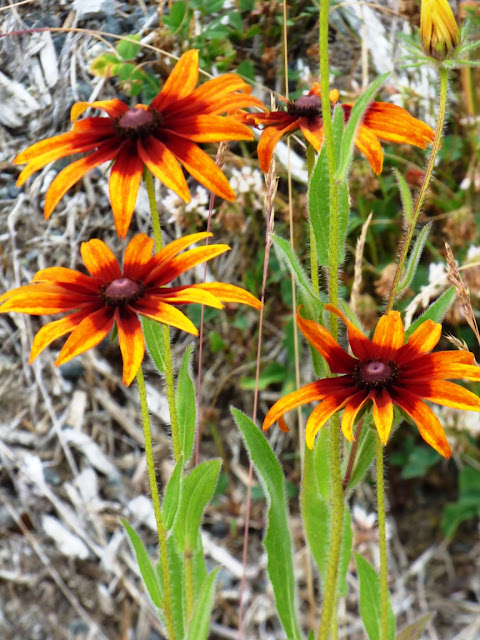 There are a number of wonderful waterfalls in the area, the delightful results of volcanism and glaciation. Alexander Falls are just off the road in the Callaghan Valley downstream of the Olympic park. 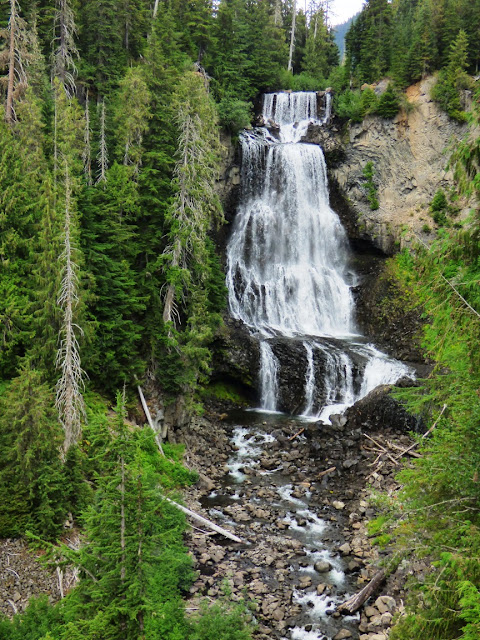 Brandywine Falls are on the main Sea to Sky highway at Brandywine Falls Provincial Park. The 70 meter (200 foot) waterfall flows over the lip of a basalt lava outcrop. The falls are migrating upstream. The rock beneath the lip of the falls is softer and more easily eroded, so it is constantly wearing away and undercutting the cliff. Niagara Falls is migrating in the same manner. 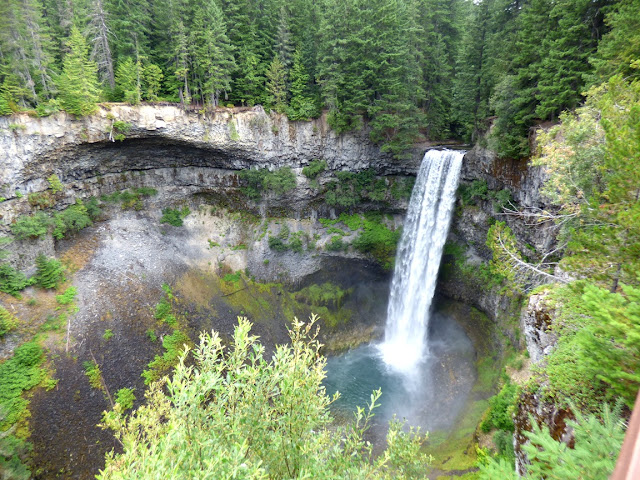 We continued down the Sea to Sky Highway (Sky to Sea?), and saw some more incredible geology. It's coming in the next post...
Posted by Garry Hayes at 8:36 PM

I believe the flowers are rudbeckias (gloriosa daisy) which grow well in arid socal. I'm shocked they grow so far north.