Vagabonding on Dangerous Ground: "This Dismal Forest Prison" and Other Problems Exploring the Northwest 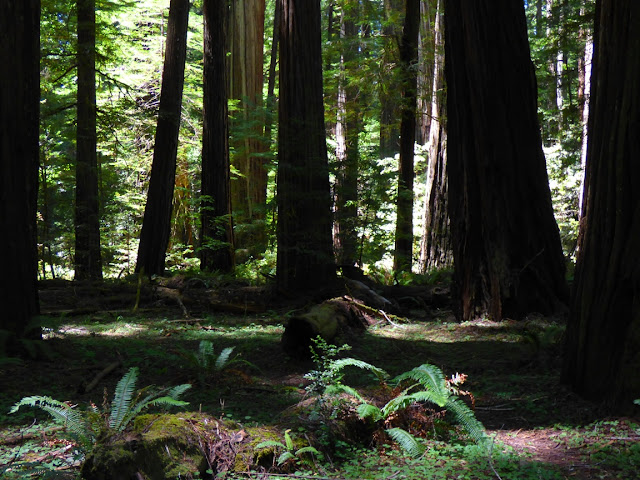 One of the things that really struck me as we went vagabonding up the Cascadia Subduction Zone last month was how rugged the landscape was. There is a topographic consequence to traveling or living onshore of a convergent boundary. In the long term, the land is pushed upwards into mountains, mountains that in many cases slope directly into the sea. Add to this the orographic effect, which dumps multitudes of rainfall in this northern latitude, and you end up with nearly impassable terrain. 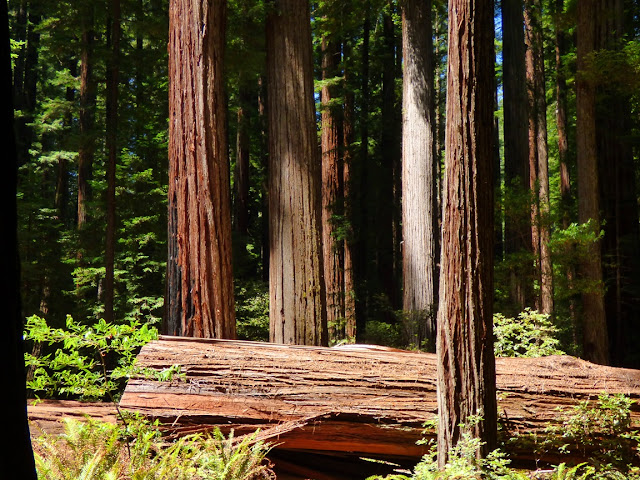 On our trip, we occasionally felt a tiny bit of impatience when the road narrowed and went from four lanes to two. It slowed us on our journey through northern California and southern Oregon. It meant that the coastal route cost us a good thirty or forty minutes over what the trip would have been had we traveled on Interstate 5 farther inland. Thirty or forty minutes! A whole five hours or so to cover the 200 miles from Crescent City to Florence! But it took only a few moments of consideration to realize what an easy time of it that we have getting from one place to another in this landscape, this incredibly rugged and even dangerous landscape.

One of the books we picked up on the journey was called "Two Peoples, One Place " by Raphael and House. It is a history of Humboldt County, and it is a bit unusual in that includes a great deal of information about people other than the Europeans who settled the region in relatively recent times. I haven't read all of it yet, but I was struck by one section, an account of the overland journey that resulted in the discovery of Humboldt Bay in 1850.

It was a miserable journey, by all accounts. The party of eight men took ten days of food supplies for an expedition that lasted around two months. The Gregg Party made their way from the Trinity River to the coast around Patrick's Point, then south through the Humboldt Bay and then up the Eel River. The party split up, with some of them attempting a more coastal route to San Francisco, but ending up in the Sacramento Valley. Gregg himself, their leader, died under somewhat disputed circumstances. The others followed the Eel River, during which they had a tough encounter with eight (8!) grizzly bears. They limped their way south to Sonoma.

The surviving accounts suggest that Gregg was not well-liked by his crew. He was constantly slowing the expedition by taking scientific readings (you know how those scientists are!). Sadly his notes and records were lost (or discarded unceremoniously after his death). How is this for a description of an argument that took place among the crew?


His cup of wrath was now filled to the brim; but he remained silent until the opposite shore was gained, when he opened upon us a perfect battery of the most withering and violent abuse. Several times during the ebullition of the old man's passion he indulged in such insulting language and comparisons, that some of the party, at best not any too amiable in their disposition, came very nearly inflicting upon him summary punishment by consigning him, instruments and all, to this beautiful river.

This is, by the way, how the Mad River got its name...

Though they were impressed by the size of the Redwood Trees, they referred to them as a "dismal forest prison". They described the near impossibility of moving their livestock and supplies through the forest floor, as it was covered with multitudes of fallen trees. They were lucky to make two miles a day. In the end they survived mostly by the generosity of the local Native American people who lived in the region. They gave the Eel River its name because of the lampreys they traded for to eat (sounds delicious).
Those who undertook an exploration of the coast by boat hardly fared better. From the first Spanish ship in 1542 to the late 1700s, visits to the region were rare, literally decades apart. Cape Mendocino seemed an invisible barrier to travels farther north, at least by the Spaniards. With no safe harbors north of San Diego (San Francisco Bay was not yet known to the Europeans), aside from the relatively exposed coast at Monterey, ships had to spend months at sea. By the time the ships made it to Mendocino, their crews were stricken with scurvy, and they were forced to turn back.
A hard and rugged land, whether by land or by sea. The wrinkled crust, the heritage of the subduction zone offshore, has always been hard to traverse, at least until the advent of modern highways, built at great cost and with huge amounts of engineering. Year to year maintenance costs are staggering.

But in the present day, it is possible drive the entire coast from Eureka to central Oregon in a long afternoon. And in the absence of the dangers of scurvy, grizzly bears, or starvation, the traveler can sit back and appreciate the incredible beauty of the region. One feels compelled to slow down and enjoy the scenery. Oregon has established a string of state parks along the rugged southern coast of the state, and each one of them is worth a stop.

Roads in southern Oregon prior to the 1930s were nightmares. Rarely paved, they were muddy avenues, and river crossings were difficult. It wasn't until the construction of a series of bridges that access became convenient. The bridges, many designed by Conde McCullough, are works of art. 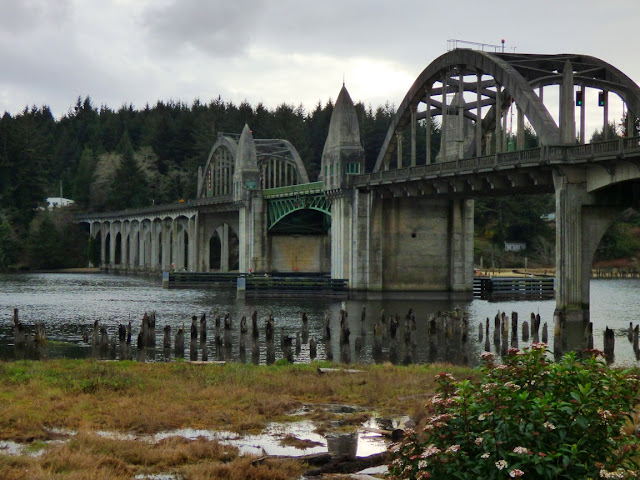 The bridge over the Siuslaw River at Florence Oregon is one of the most beautiful. Tell me this doesn't look just a little like a cathedral... 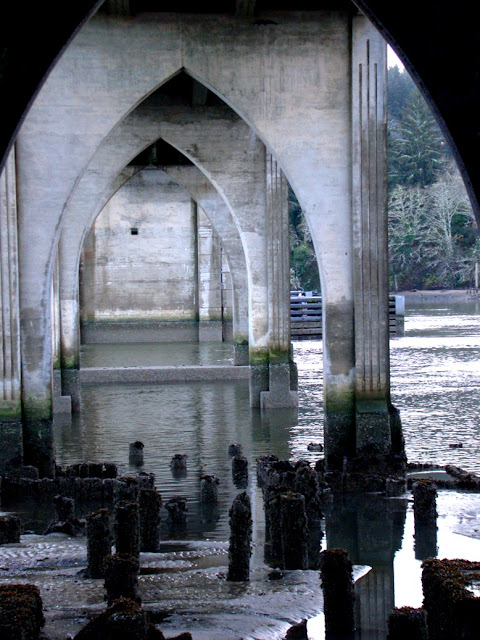 The question of our time is how an earthquake might set transportation in the Pacific Northwest back. A 2009 scenario involving a magnitude 8.3 earthquake estimates that two bridges would collapse outright, and that 23 would suffer severe damage. 155 bridges would ride out the quake with slight to moderate damage. The technology exists to retrofit many of the vulnerable bridges; it just takes the political will. I worry about that some, given the lousy job we are doing maintaining bridges and other infrastructure from normal wear and tear. To many people, the idea of giant earthquakes is a bit too abstract. 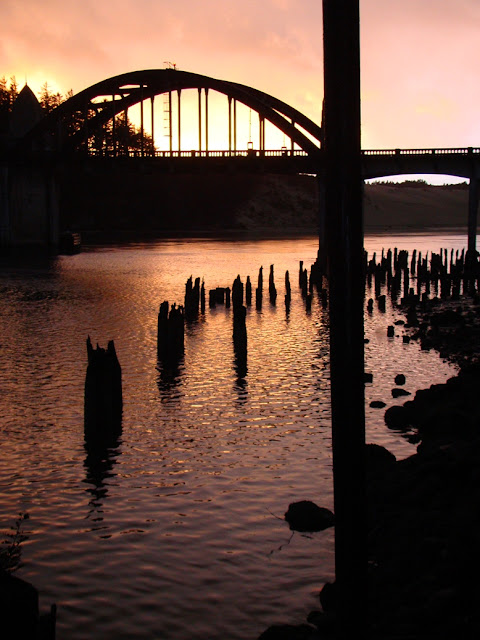 When we reached Coos Bay and Florence, the nature of the coastline changed radically. In the next post, we'll be talking about sand. Lots and lots of sand.
Posted by Garry Hayes at 11:29 PM