Vagabonding on Dangerous Ground: Our Tour of the Greatest National Park I Never Once Set Foot In

The western slope of the Cascades Range is green. Very green. There are trees, shrubs, mosses, grasses, just about every kind photosynthesizing plant there is. This is due of course to the mountains themselves. They provide a barrier to incoming Pacific storms, causing the moist masses of air to rise and condense, with copious amounts of rain and snow falling to the ground. We were still in the realm of the rainforest.
We were on the southbound road towards home following our exploration of the coastal belt of the Cascadia Subduction Zone. We were on vacation, but we happened to be in the region when the New Yorker article about the coming magnitude 9 earthquake hit the stands. All of the sudden, it was the talk of the town (if you were in Seattle or Portland, anyway). So our trip became a blog exploration of the fascinating geology and natural history of the region.
We had spent nearly a week exploring the coastal belt of British Columbia, but now we were back over the border into northern Washington. We were inland now, following the chain of volcanoes that result from the melting of the rocks above the sinking slab in the subduction zone. We had already seen the Black Tusk and Mt. Garibaldi in Canada, and were now looking for the northernmost volcanoes in Washington. They were hard to find in the thick forest!
We headed up the Skagit River to pay a visit to what I believe is the only remaining national park in the western contiguous states that I hadn't been to yet: North Cascades National Park. We found a space in the park campground, and moved on to the visitor center nearby. We weren't seeing many Cascades mountains or volcanoes. We also had not yet, and would not ever set foot in the national park during our visit.
The thing is, North Cascades is a wilderness park. No roads reach the interior of the park, and the only road that crosses the range doesn't pass through park lands. The Skagit River has been dammed for power generation, and the valley between the north and south units of North Cascades is administered as the Ross Lake National Recreation Area. Our campground and the visitor center are both on Ross Lake lands. I wasn't sure how much of the park we would be able to see during our short visit. We didn't have time for long hikes, and the main road between the two units was ensconced in a steep gorge.

We could see a few peaks above the river, but they weren't the glacial alpine peaks I was expecting to see. It was deep forest everywhere. Where were the rocks?
From the visitor center, a short nature trail promised a view. We walked over to take a look, and mountains appeared out of the greenery!
The visitor center was on a bluff above the Skagit River, and the viewpoint provided a vista up Goodell Creek towards the Southern Picket Range. The Pickets rise to 8,000 feet, and expose granitic and metamorphic rocks that have been scoured by glaciation. Glaciers still cling to the highest ridges. 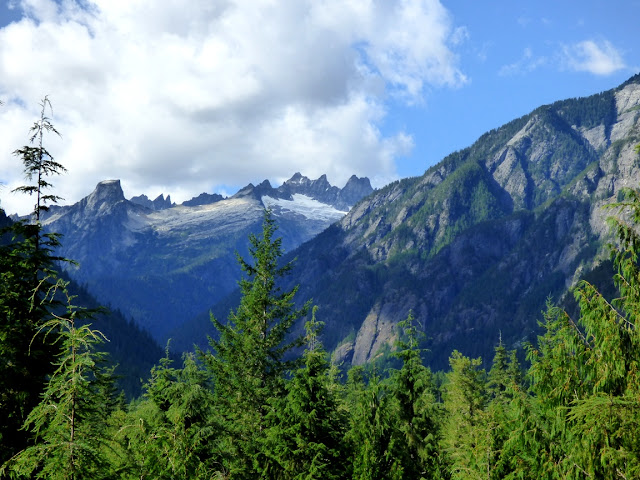 One peak really stood out from the others. It's called Pinnacle Peak, or "The Chopping Block", and has an elevation of 6,805 feet (2,704 meters). The summit area preserves a bit of the relatively flat pre-glacial topography. The ice age glaciers chipped around the edges, but didn't remove it all. 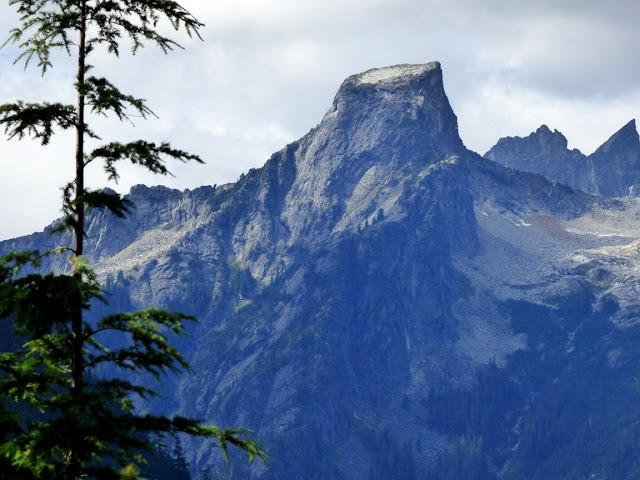 Having found some rocks at last, we started looking at the maps to see if we could find more. I had no idea what was about to come next! More next time...
Posted by Garry Hayes at 9:42 PM