Vagabonding on Dangerous Ground: Into the Land of Sand and Exploding Whales 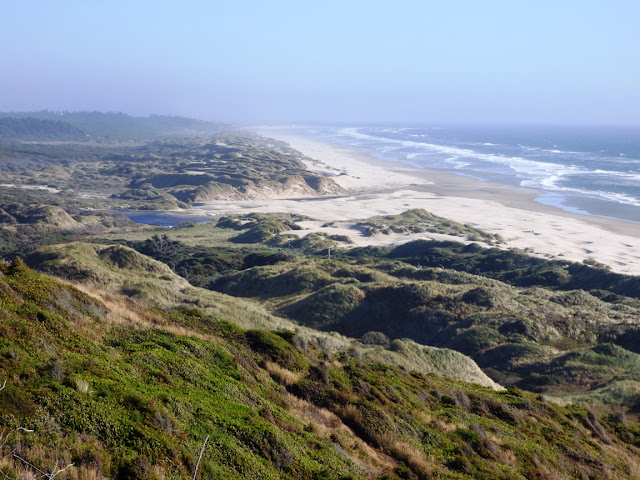 The Cascadia Subduction Zone has raised mountains. The entire length of the convergent boundary, from California to British Columbia is marked by incredibly rugged cliffs and steep, forest-covered topography. There aren't a lot of sandy stretches of coast in southern Oregon, the kind that folks from Florida, south Texas, or the Atlantic seaboard would recognize. But in the central part of the state, there is one section of coast that is extraordinary. 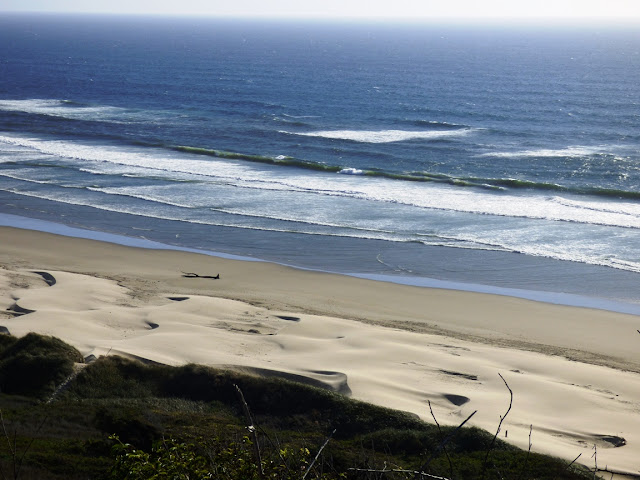 The so-called Coos Bay dune sheet extends for 56 miles (90 kms) from Coos Bay to Florence, and it is a strange and bizarre landscape that contains 85% of Oregon's active dunes. It's mostly protected as Oregon Dunes National Recreational Area. It isn't that there is simply a long expanse of sandy beach; the sand has been blowing and migrating inland, in some places nearly 3 miles, covering forests in some cases, and in other situations, stabilizing and becoming forest. This odd environment makes for unique ecosystem and geological landscape, mixing ocean, swamps, rivers, forests, and lakes. 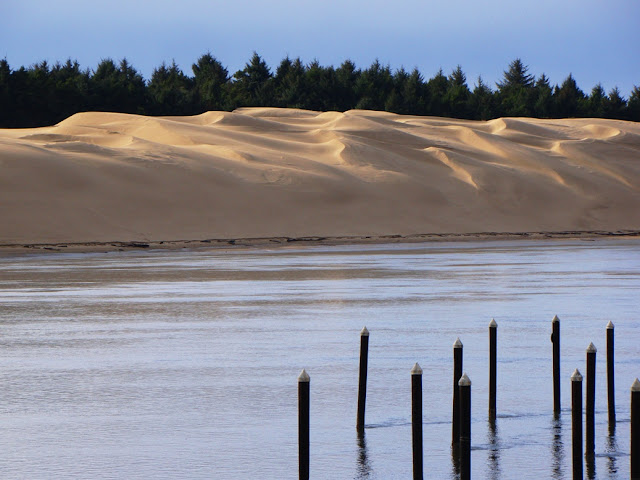 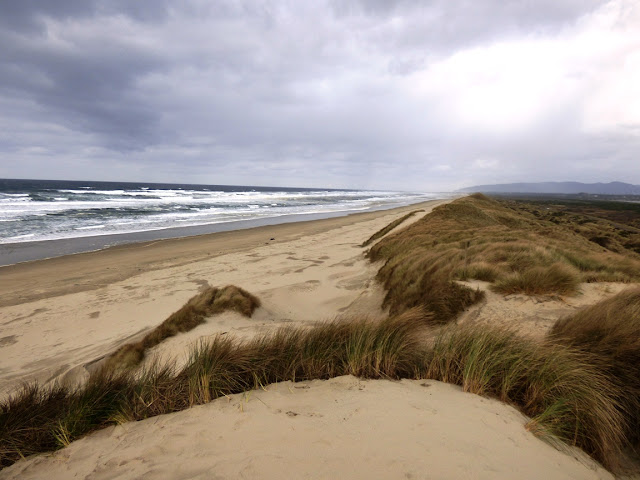 I've only just begun to explore this incredible landscape. I'm usually based out of Florence, so that's where these photos are coming from. Wave action is intense and unending. At times the waves are huge, and onshore winds can approach hurricane velocity. The first ridge of sand, the foredune, absorbs much of the impact of the wind and waves. 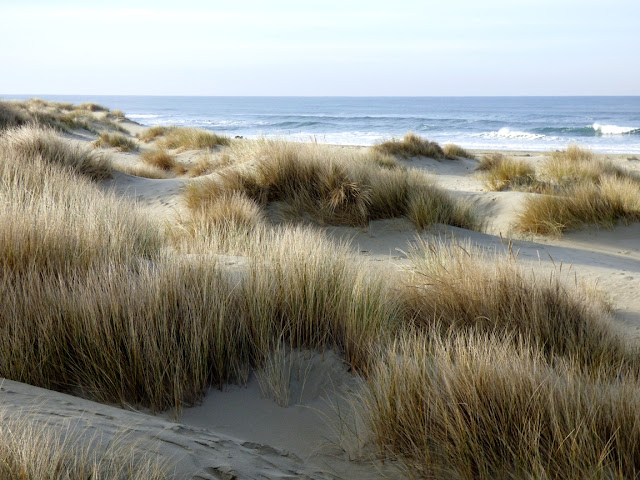 The dunes here have been altered extensively in the last century. Urbanization, where it's taken place has been secondary. The big changes resulted from the construction of jetties at the mouth of the Siuslaw and other rivers, which back up the sand along the coast as efficiently as a dam. The other has been the introduction of European beachgrass to augment the stabilization of migrating dunes. The native grasses have been pushed aside in many instances as the European non-native takes over. Because of the spread of grasses, 80 % of the dune sheet is covered by vegetation. In 1939 it was only 20% (US Forest Service data). 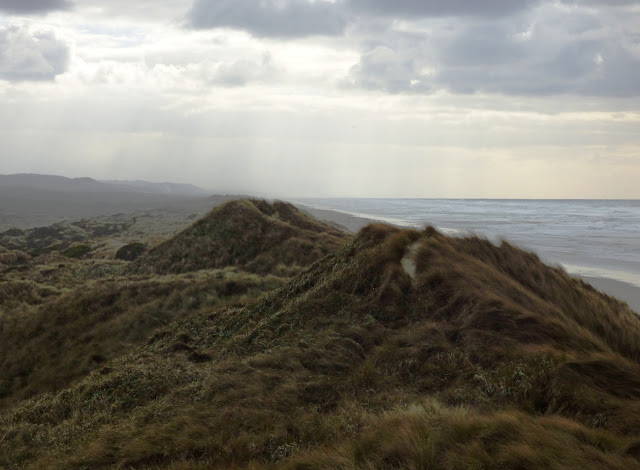 The rivers and streams that flow into the dune fields, along with a high groundwater table, have created a network of swamps, and more than two dozen ponds and lakes. Some of the larger lakes have been developed as recreational resorts.The complex provides a rich environment for wildlife, both local and migratory. 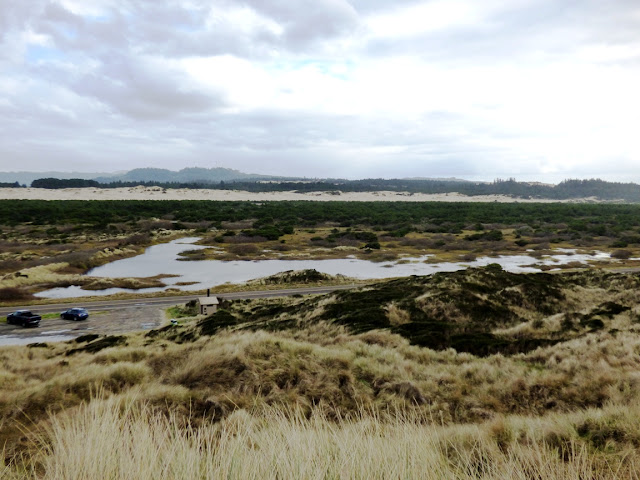 One very bizarre species in the area is the Darlingtonia californica, the carnivorous Pitcher Plant. I've written about the small park north of Florence previously. The plants can only grow in nitrogen poor environments like bogs or in serpentine soils. They get their nitrogen from the insects they consume. 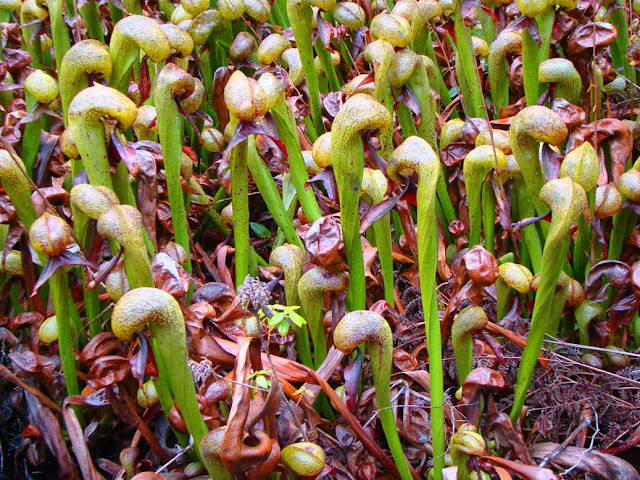 One of the hazards of human colonization and development of the extensive dune field is the migration of the dunes over time, which could cover railroads and highways. That was one of the prime reason for efforts at dune stabilization in the early 1900s.

Another hazard, one not truly experienced in modern times, is the effect of large tsunamis in the event of a gigantic earthquake along the Cascadia Subduction Zone. Many of the lowland areas are expected to be inundated by tsunami surges that could reach depths of several tens of feet. Evacuation routes are prominently posted in developed areas. 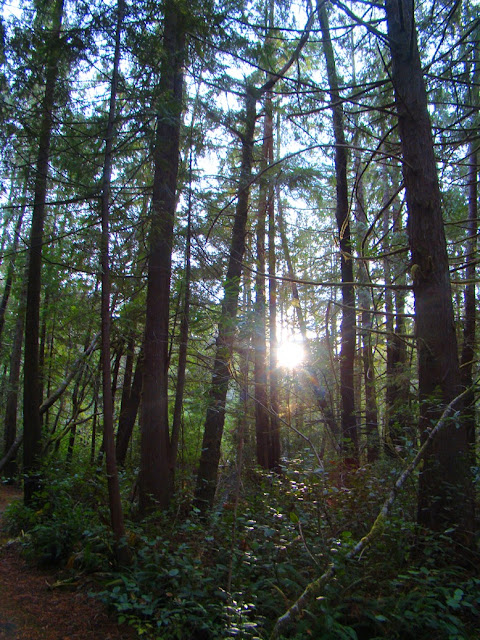 There is one more hazard that Florence is rather famed for, although they probably wish it could be forgotten: exploding whales. If you haven't seen the video, you are in for a "treat". There is an extensive web presence if you want to learn more!