Vagabonding on Dangerous Ground: Into the Rainforest, Seeing Something Strange...Rain 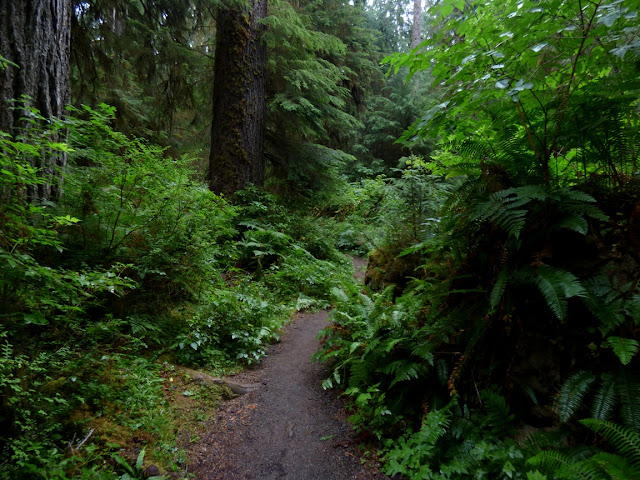 So, after a Dismal day of Disappointment, the vagabonders hit the road, going north onto the Olympic Peninsula. It was my first time on the west side of the peninsula, and my first foray into the Hoh Rainforest of Olympic National Park. Strangely enough, it was raining the day we arrived, strange because it was the first day of rain in something like two months. And the forest felt like it. It has been a very bad year, drought-wise. The Hoh River at our campsite was a lot smaller than I expected, even for summertime. The lack of water and warm temperatures bode ill for the coming migrations of the salmon and coastal cutthroat trout. 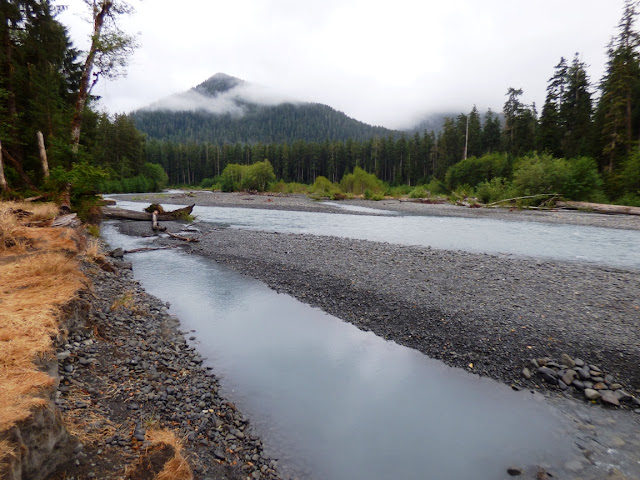 Olympic National Park is one of the most diverse parks in the United States. It encompasses alpine glaciers and high rocky peaks, what is probably the greatest expanse of old-growth temperate rainforest left in the states, and mile after mile of rocky Pacific coastline. And all of this is due to tectonic activity along the Cascadia Subduction Zone. 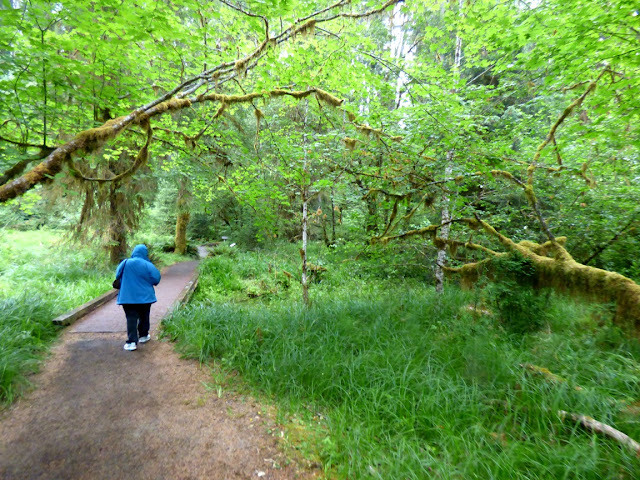 As the Juan de Fuca plate is pushed beneath the North American continent, the sediments on the ocean floor were essentially scraped off the crust and accreted to the western edge of the continent. One earthquake at a time, a few inches or feet at a time, the mountains were pushed upwards, eventually reaching elevations of nearly 8,000 feet. The wall of sediment and rock forms a barrier to the landward movement of Pacific storms, forcing the air upwards and causing it to precipitate on the western slopes. Precipitation is a weak word for what happens; in an average year, 12.5 feet (380 cm) of rain may fall on these mountains. 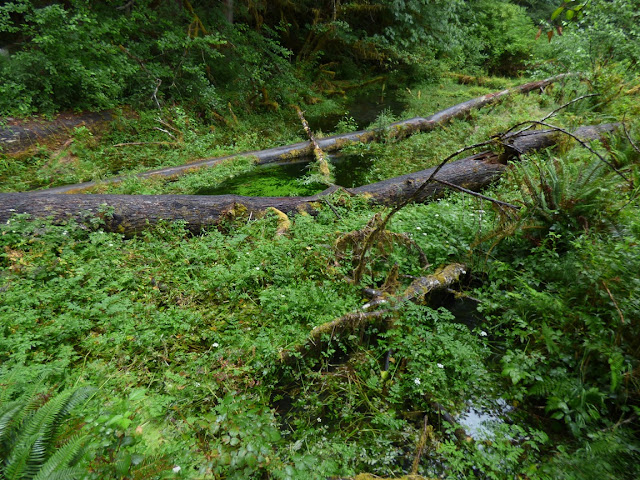 The forests are lush and filled with huge Sitka Spruce, Douglas Fir, Western Hemlock, Western Red Cedar and Broad-leaf Maple trees. The forests are layered, with something photosynthesizing at every level, from the algae in the creeks, flowers and grasses on the forest floor, to the shrubs, and the mosses that hang from practically every branch. Something is there to collect almost every photon of sunlight that penetrates the seemingly ever-present clouds. 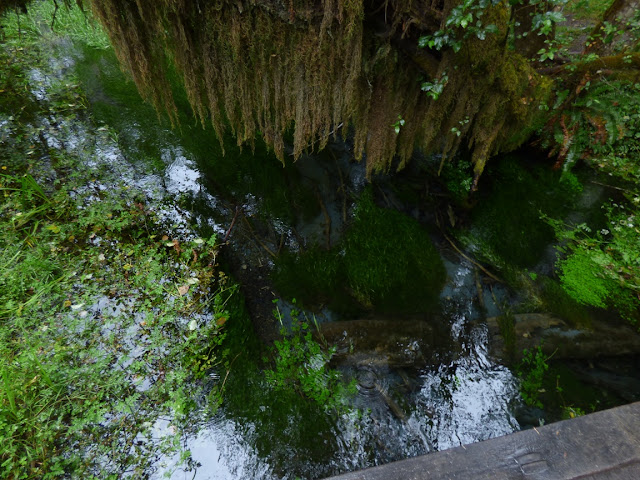 It's been a dry year, at least by some metrics. There was a lot of rain at times during the winter, but because the storms were warm, there was almost no snow, not even 10% of normal in places. The height of the runoff was in February, not the normal late spring or early summer. There were no snowbanks to nourish the rivers through the summer and fall, when rain is usually at the lowest ebb. It has set up a most unusual situation in the rainforests this year: the threat of wildfire. 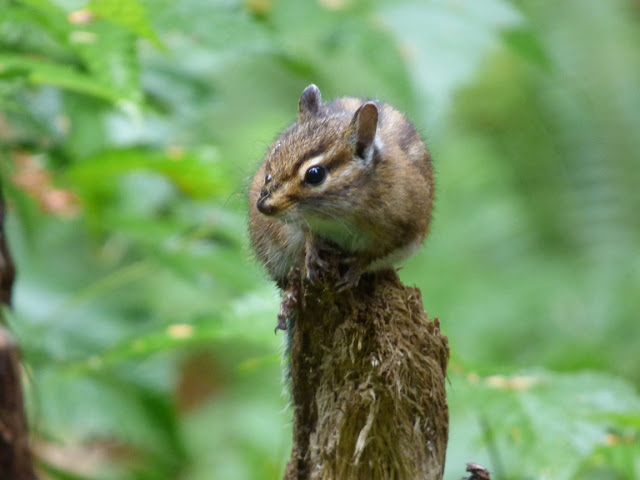 Fires have been burning all summer throughout the Pacific Northwest. We were lucky in our timing in that we missed the worst of the smoke plumes that obscured the mountains. The fires aren't just in the drier inland areas; the rainforest is burning too. Two canyons south of the Hoh River, on the Queets River, the Paradise Fire has burned about 2,400 acres (almost 4 square miles). That's small by California standards (the Rim Fire last year burned 257,000 acres, or about 400 square miles), but the fire is the largest since the park was established. And it's still going today, after three months. It probably won't be extinguished until the autumn rains come. 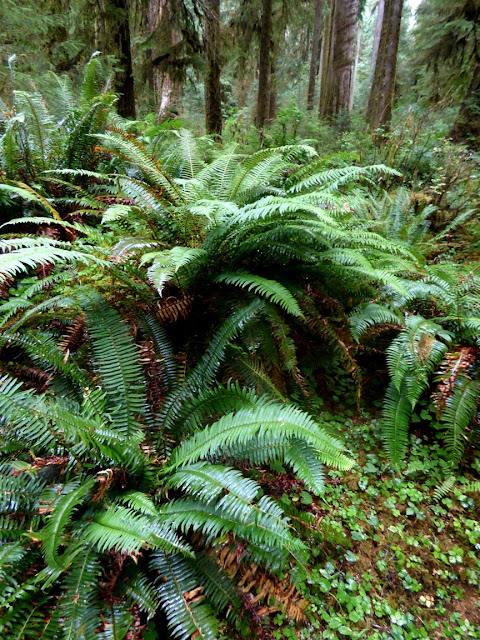 In the meantime, we were enjoying the light drizzle and the greenery that persisted despite the dry conditions. We strolled along the Hall of Mosses Trail, which follows a river terrace above the Hoh River. Terraces result when a river starts to cut into its own sediments following regional uplift (such as is happening in the Olympics on a constant basis). Since the river no longer floods across the surface, the ecosystem remains stable on a long-term basis, and the trees are able to grow to immense size. 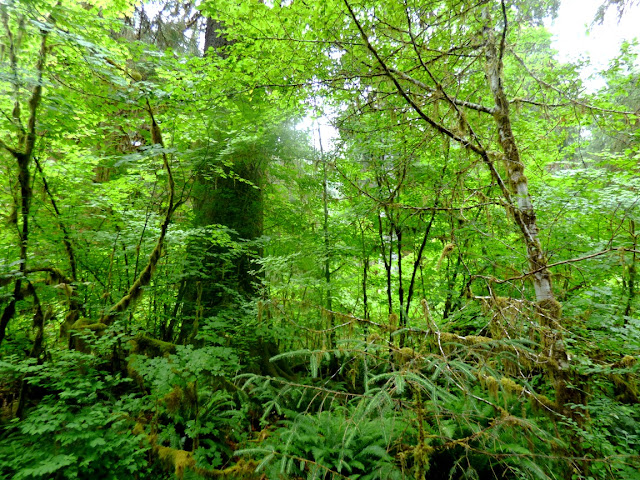 One section of the trail just floored me. It was a little detour into a grove of Big Leaf Maple Trees. I might as well have stumbled into the Forest of Fangorn, with Ents standing all around us. Thick mats of moss hung from the branches, and the leaves were practically invisible in the canopy above. 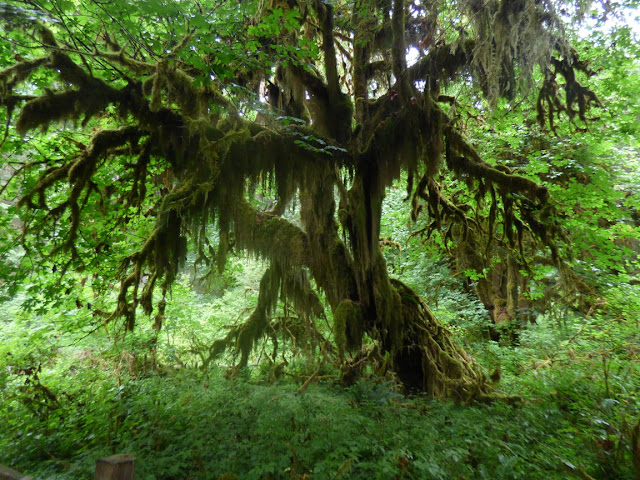 The trees were huge... 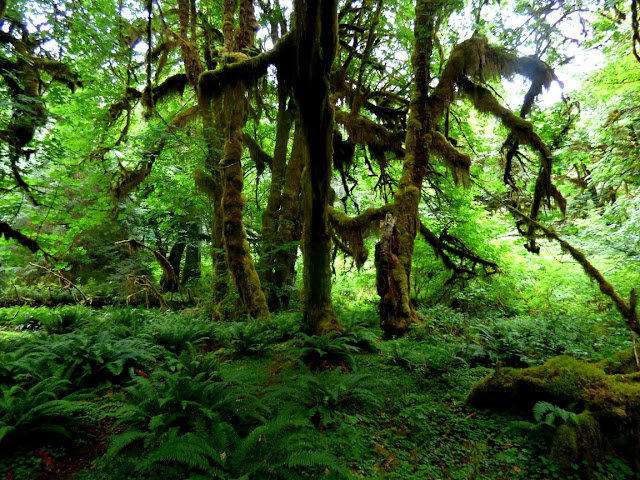 And the limbs looked like giant arms reaching out for us. 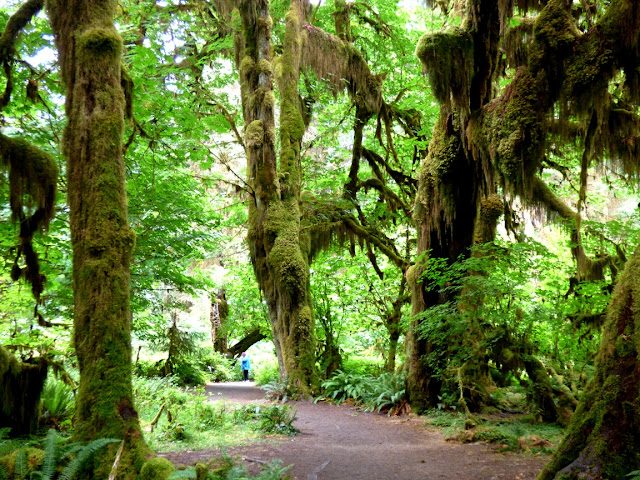 When in a forest like this, one must never forget to look up. 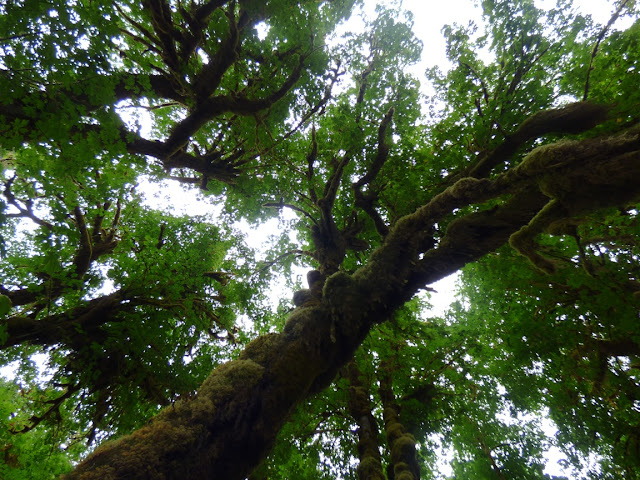 And also keep an eye out for the wildlife. There is a struggle taking place in the branches of the rainforest. From times long forgotten, the Northern Spotted Owl thrived in these woods. Humans arrived and started to cut down the old-growth forests, and the owl population went into a steep decline. Eventually it was declared an endangered species, and logging was restricted in many areas (there were other factors involved, but the owl took most of the blame for the economic disruptions). 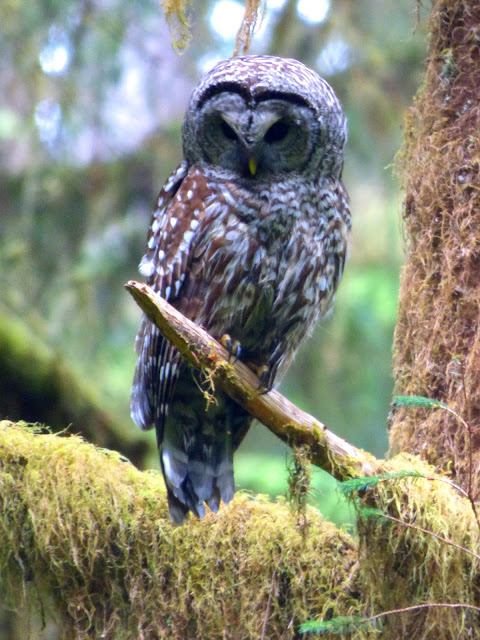 Meanwhile in the eastern part of the continent, a related species was widening its range. The Barred Owl was able to take advantage of a warming climate and expanding second growth forests across the northern states and Canada to move west, and it arrived in Olympic National Park in 1985. It is a bigger species than the Spotted Owl, and able to survive on a wider variety of prey. It's been displacing the Spotted Owls over most of their range. They reached Muir Woods in California in 2002. Mrs. Geotripper spotted one along the trail and we got quite a few pictures, many of which are posted on my bird blog here. Despite its checkered history as an invasive species, it's a beautiful bird. 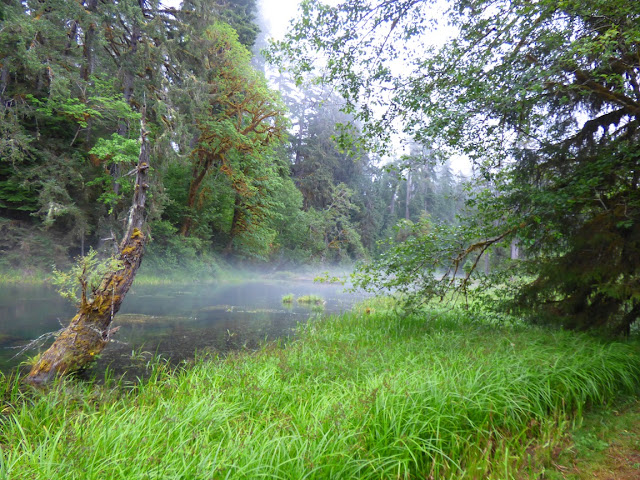 The storm was breaking the next morning as we rounded the north side of the Olympic Peninsula. We set out for Lake Crescent. More later...
Posted by Garry Hayes at 10:43 PM