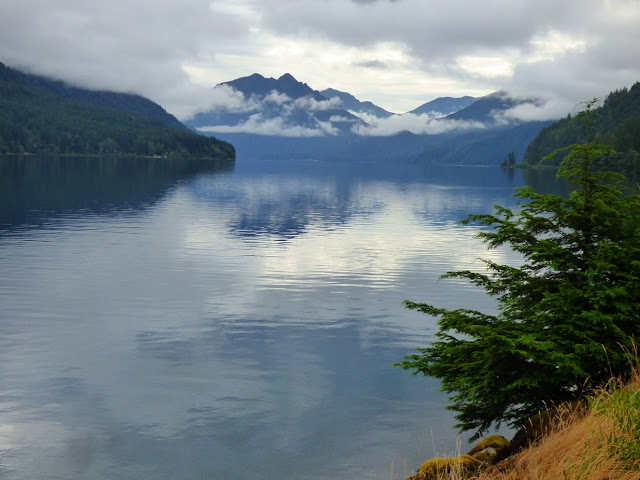 We continued north and east from the Hoh Rainforest on our vagabonding journey through the Cascadia Subduction Zone. Mountains have been raised along the entire convergent boundary, but the ranges on the Olympic Peninsula are in a class by themselves. They are high enough to support glaciers, which means that Olympic National Park is one of the few parks in the country where one can explore a glacier, a rainforest, lakes, and ocean shorelines. The diversity of the landscape is incredible. 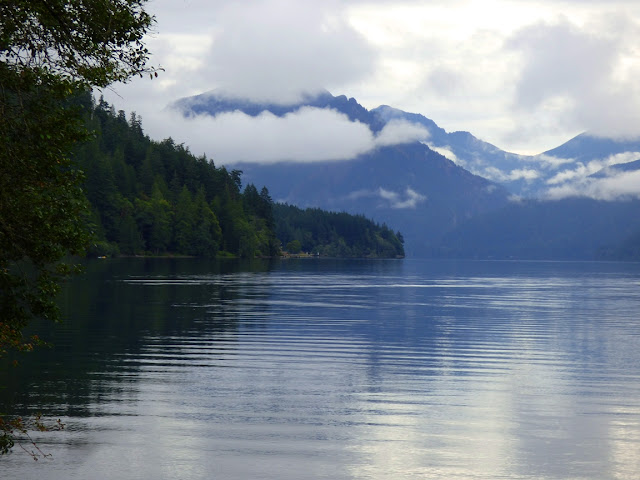 Lake Crescent is a beautiful body of water on the north side of the Olympic Peninsula. Lakes are not a common feature of Olympic National Park. Aside from Crescent, there are a few small glacial lakes in the alpine zone, but not much else. Lake Crescent stands out, both for size and depth, and also for low elevation. It's eleven miles long, more than two miles wide, and 600-700 feet in depth, one of the deepest lakes in Washington. We had a few moments to stop along the lakeshore to look around.

The lake is glacial in origin, filling a hollow where the ice scooped out softer rock. The lake once drained to the east into Indian Creek, but a gigantic landslide about 8,000 years ago split the lake (Lake Sutherland is the other part). As Lake Crescent filled deeper and deeper, the water spilled over into a different drainage, the Lyre River, which flows northwest. Isolation of the lake by Lyre Falls has resulted in the evolution of two subspecies of fish, the Beardslee Trout, and the Crescenti Cutthroat Trout. 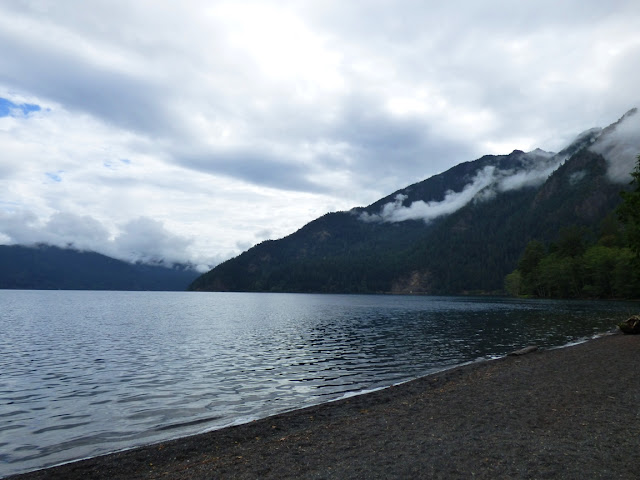 The Olympic Mountains are extraordinary. They are an anomaly, both in their height, and in their geography. On the map they look like a gigantic horseshoe.

A geologic sketch map reveals the basic structure of the range. The "horseshoe" of basalt and sedimentary rocks (the Peripheral Rocks, or Crescent Formation) partially surrounds the "Core Rocks", an assemblage of slightly altered sandstone and shale layers. The Core Rocks accumulated from underwater landslides ("turbidity currents") within the trench and accretionary wedge of the subduction zone. The fact that these rocks are now thousands of feet above sea level is the interesting puzzle. This happened because bits and pieces of continents and island arcs randomly arrived at the subduction zone, mucking up the subduction process the way too many sheets of paper at once can muck up a paper-shredder. In the case of the Olympics, there was a mass of land north (Vancouver Island) and an accreted terrane to the south (the North Cascades), and a bend in the subduction zone itself. In essence, too much material was being stuffed into the subduction zone, so the excess material went the only way it could, which was up (I discussed this in a bit more detail last year in this post). 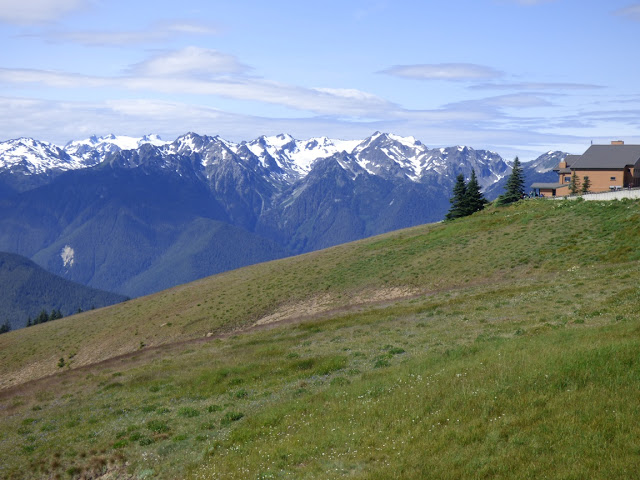 Not that it was any great surprise, but the weather was overcast and drizzly when we arrived at Port Angeles. We had given a bit of thought to heading up to Hurricane Ridge, but it was apparent that nothing would be visible, so we got onto the ferry to Vancouver Island instead. I couldn't pass up the chance to show a few shots from our visit to the ridge last year. The view is simply stunning, at least when conditions are clear! 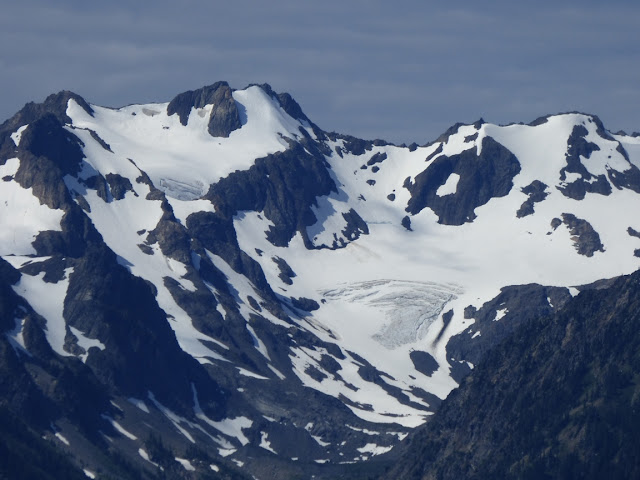 I'm pretty sure there was a great deal less snow on the high peaks this year. As noted in the previous post on the Hoh Rainforest, the snowpack last winter was in the 10% range or less, and the peak runoff was in February. Many of the rivers are getting their main flows from glacial melt rather than snowmelt, and that's not good for the rivers or the glaciers. 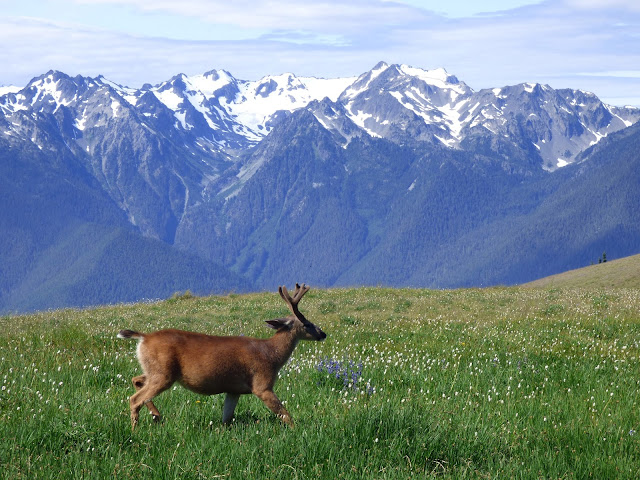 The glaciers of Olympic National Park are especially sensitive to climate change. The climate is not as cold as areas farther inland, so the glaciers have to depend on intense levels of precipitation to maintain the levels of ice. They have been shrinking precipitously over the last century, and dozens have melted completely. Rivers that used to flow throughout the year might dry up in the summer or fall as more ice disappears, which will be bad news for aquatic life in those areas. 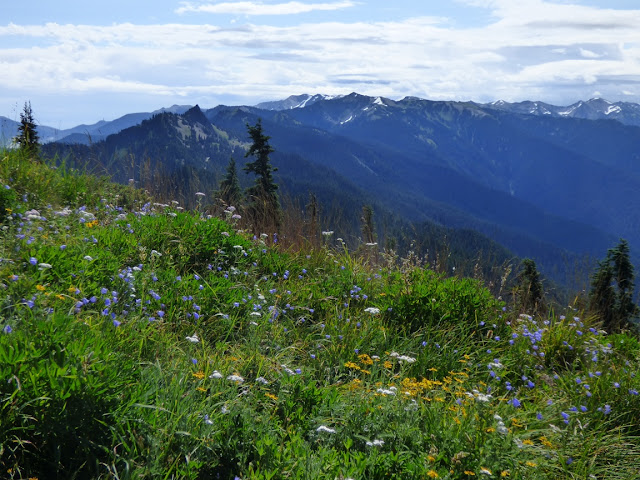 We ran out of U.S. states to explore, but the convergent boundary continued across the Strait of Juan de Fuca. We took the ferry into Canada, on our way to Victoria and ultimately to the northernmost volcanoes of the Cascades. Luckily, we remembered our passports! 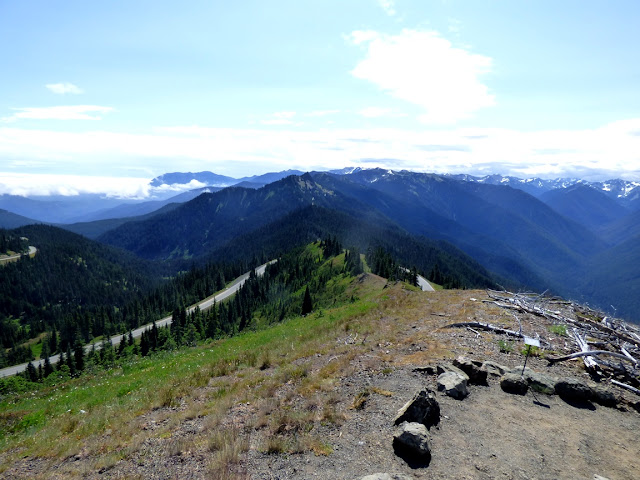