Vagabonding on Dangerous Ground: Stone Rings, Glaciers, and "Dinosaurs" on the Coast of the Salish Sea 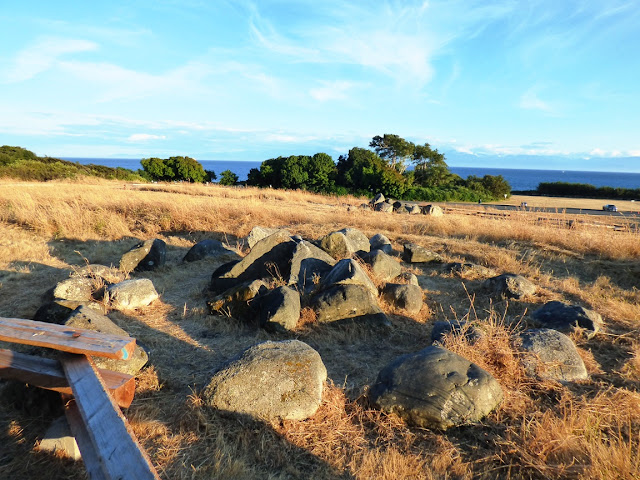 Our vagabonding trip along the Cascadia Subduction Zone involved a desire to spend most nights camping, but we now we had reached Canada, our gear was all wet, and we were in one of the most beautiful cities in the world, Victoria. We decided to spend a few days in the comfort of a hotel and dry out a bit.

Victoria is an architecturally scenic city, but it is also a city of geology and archaeology. Some of the best parts are found in city parks like Beacon Hill and a series of shoreline green areas (although not so green in this dry year). We spent some time here last year, but I was flabbergasted to find I had missed an obvious link to the past that had been in plain view. It was a group of stone rings on the slope of Beacon Hill above Finlayson Point, right next to Mile Zero of the Trans-Canada Highway. 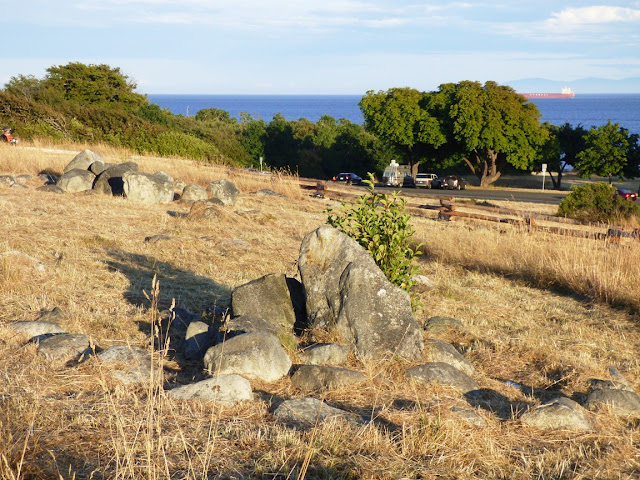 The stone rings were burial sites of the First Nation Songhees people. When Europeans established the city in the middle 1800s, there were several dozen of these rings on the hill, but the new colonizers were not particularly interested in preserving evidence of the past. They removed most of the stones and used them elsewhere. By the 1980s only four rings remained on the slope below Beacon Hill, hidden from sight by a thick growth of vegetation. In 1986, the parks department removed the vegetation, and then bulldozed the stone rings to facilitate mowing. They didn't realize what they were doing. Archaeologists directed to crews to replace the stones as best as could be remembered, and there were promises to protected the site and to provide interpretive signage. A low fence surrounds the rings, but when we were there, I didn't see any signs explaining the site. 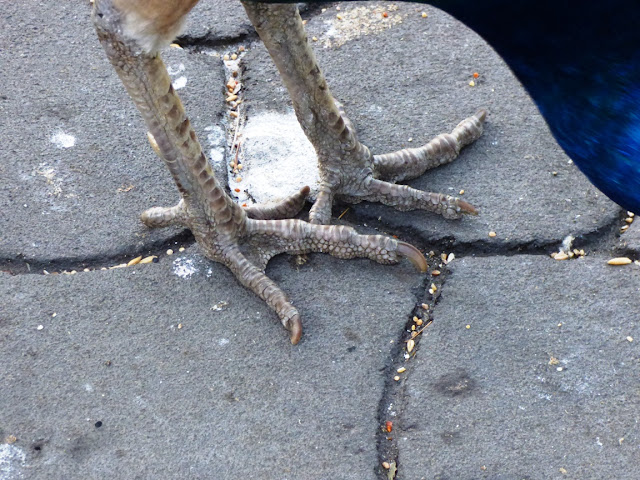 The parks in the city of Victoria are good places to see the only dinosaurs remaining on planet Earth. They are of course the avian dinosaurs, the only members of the dinosaurian clan to survive the great extinction event at the end of the Cretaceous period. At Beacon Hill, we saw several large bird species, including a Peacock. Seen only from the knees down, they look terrifying, as scary as any T-rex. 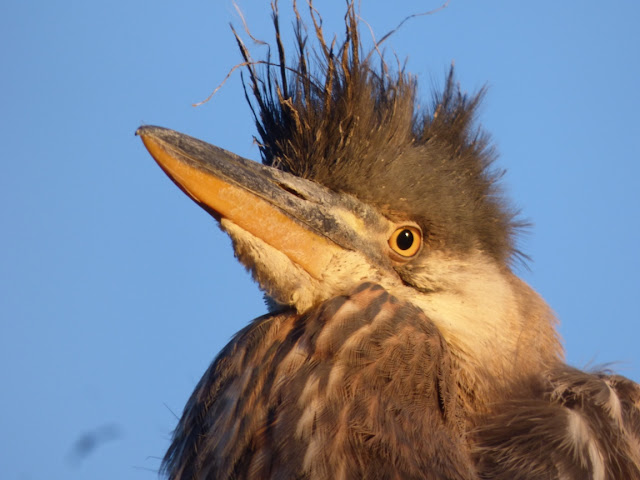 There was also a rookery of Great Blue Herons. A juvenile was hanging out in the low branches of a tree by the pond, and the adults seemed to be patrolling the area from high perches in the tallest trees. Every few minutes they erupted into an other-worldly shrieking, and there was a commotion up in the crowns of the trees. We couldn't see what they were upset about. 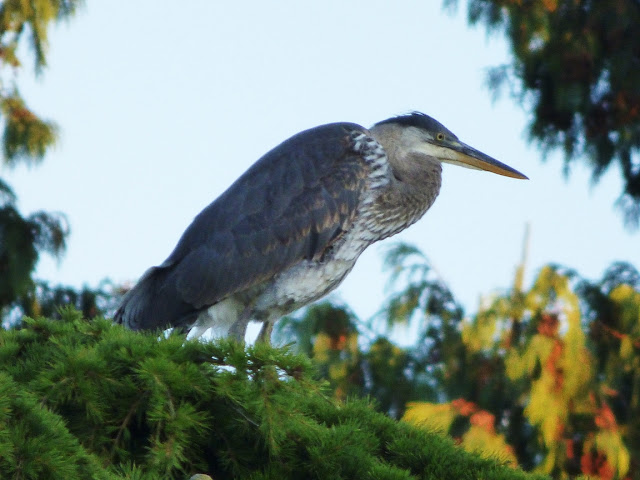 After a few minutes the reason became clear. They were at war with raptors. There was a pair of Bald Eagles trying to attack the nestlings and eggs in the rookery. It was a life and death battle going on over our heads (for more pictures of the event, check out my story at Geotripper's California Birds). 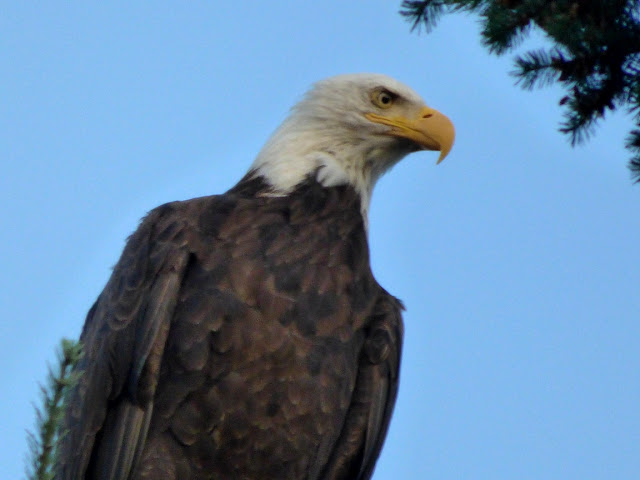 We continued along the coast to take in the coastal parks, and to climb one of the highest peaks in the Victoria area. It was a good way to see evidence of the glacial heritage of this landscape. 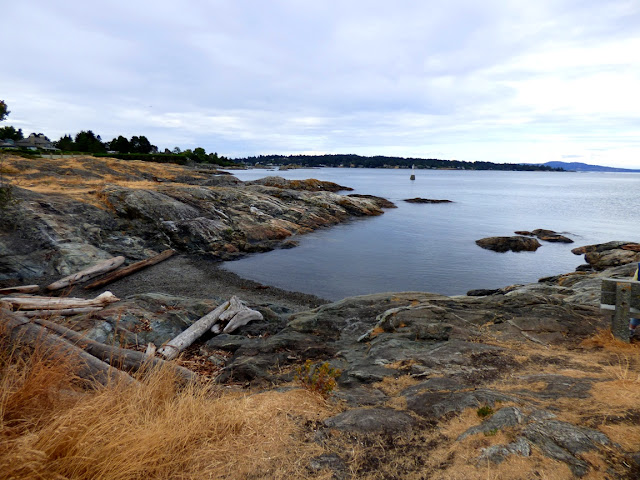 Direct evidence exists for only two advances of glacial ice across this region, but there were undoubtedly many more. The youngest events tended to erase the deposits of the earlier advances of ice. Soils obscure many of the glacially carved rocks, so the best place to search for glacial features was along the coastline where wave erosion removes the soil cover. 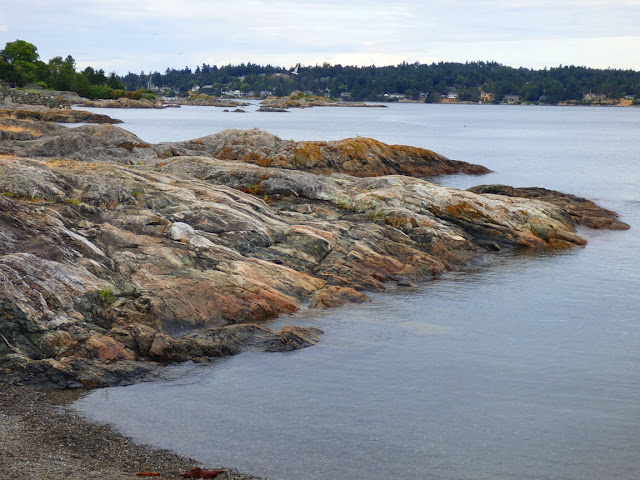 The coastal drive provided many examples of glacial polish, striations, and grooves. The smoothed off rocks provided clear exposures of the ancient metamorphic rocks that underlie this part of Vancouver Island. The rocks are called the Wark or Colquitz gneiss, and they formed as part of Wrangellia, a terrane that formed hundreds or thousands of miles away across the Pacific. It was accreted to the North American continent about 100 million years ago during the Cretaceous Period. I had a pleasant teaching moment when some older ladies who were enjoying the view wondered why the strange man was taking pictures of the rocks rather than the coastline. They politely said thank you at the end of the long explanation (I get that a lot). 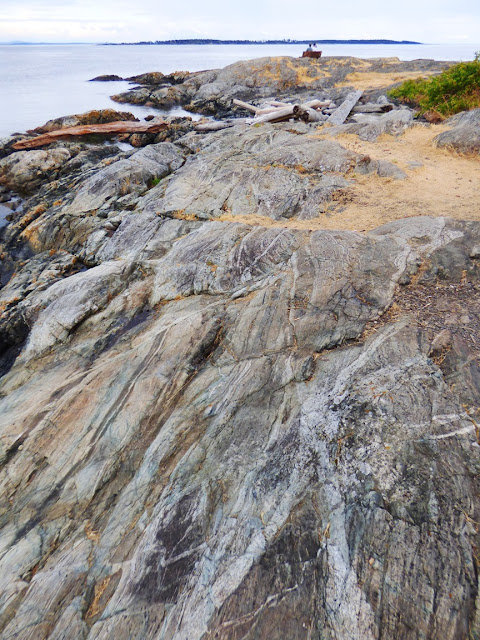 We then drove to the top of Mount Douglas (known by the Saanich people as pq̕áls or PKOLS), a 260 m (853 ft) hill that rises over Victoria, providing a 360 degree view of the region. The mountain provides several different biologic zones, including a Garry Oak woodland around the summit, one of the northernmost exposures of oak trees in North America. The lower slopes are covered by conifer forests. 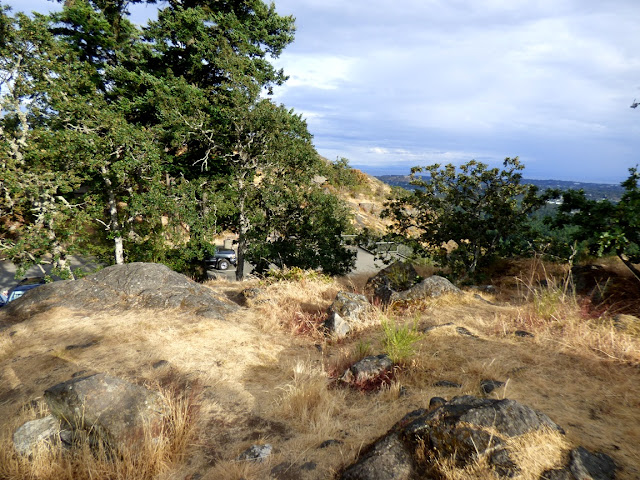 The view is fantastic. It really is a wonderful spot to gain an appreciation of the regional geography. The Olympic Mountains were visible across the Strait of Juan de Fuca, and I'm told that Mt. Rainier is visible on the clearest days (it's over 130 miles away). The entire city of Victoria spreads out to the south. 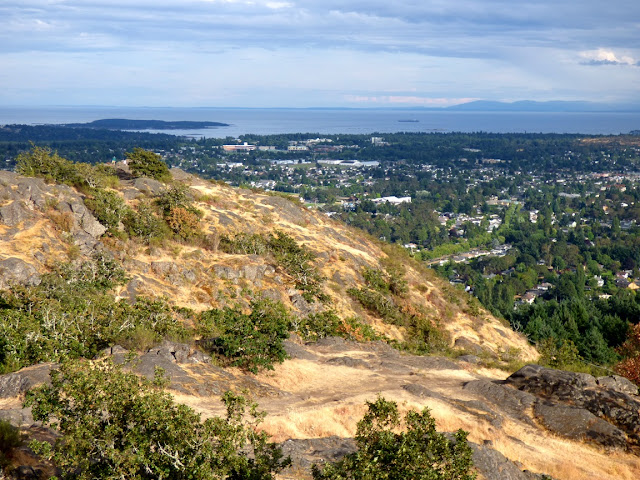 To the north is the Saanich Peninsula, and the glacially scoured Strait of Georgia, the northern extension of the Salish Sea. The mountains of Vancouver Island recede into the distance. The island is huge, 460 kilometres (290 miles) in length and 80 kilometres (50 miles) in width. 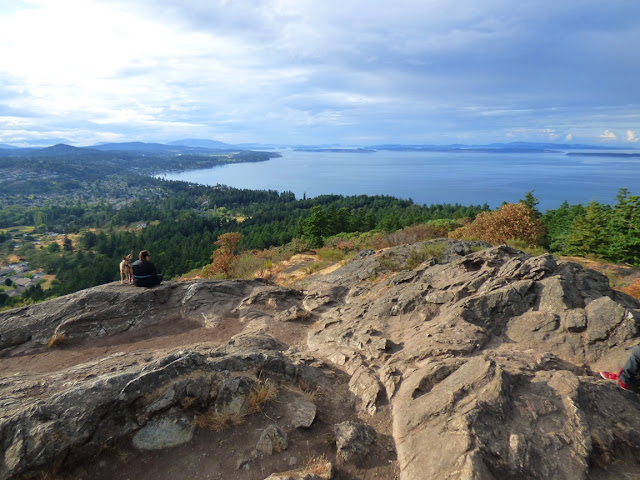 The next day was a layover for us, and we mostly pretended to be tourists, visiting Butchart Gardens (you can read my somewhat heretical review of the place here). The following day we were going to be seafarers once more, crossing the Strait of Georgia onto the Canadian mainland, and the Sea to the Sky Highway. I was anxiously watching the weather, because we traveled there last year, and never saw it because of low overcast conditions. What would we would see?
Posted by Garry Hayes at 12:37 AM

Amazing post Garry! A few years ago I did a road trip from Portland up to Olympic and it was an amazing trip. Your post has inspired me to plan a trip back! Those are some great shots from Hurricane Ridge too. When I was there we only got a glimpse of the peaks due to the cloud cover. Thanks again for the inspiration!

Thanks for the kind comments! I hope your next trip is great!