A Fleeting Spring in a Horrible Drought: A Day in Yosemite Valley 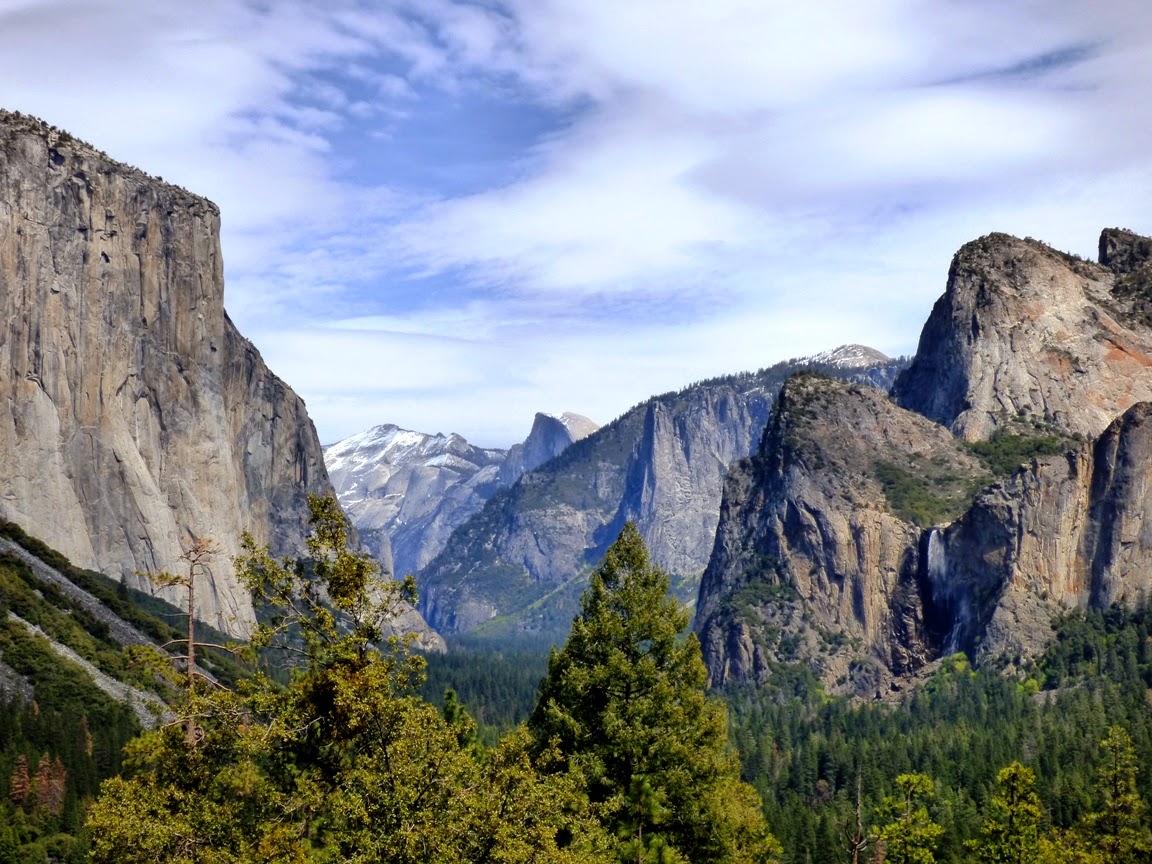 There are so many moments when I want to deny the reality of the California drought. It has been relentless, the winter air warm and dry, the soil crunching under my feet at a time when it should be muddy and covered with vegetation. Even though my backyard rain gauge says we've had a normal year for precipitation, the reality is that it almost all fell in December, and almost none fell as snow in the Sierra Nevada. The snowpack is 5% of normal. Five percent! It's still April, and the main pulse of snowmelt in the mountains has already taken place when it should be happening in May and June. The spring season is fleeting this year, and that's the background to my trip to Yosemite Valley last weekend. 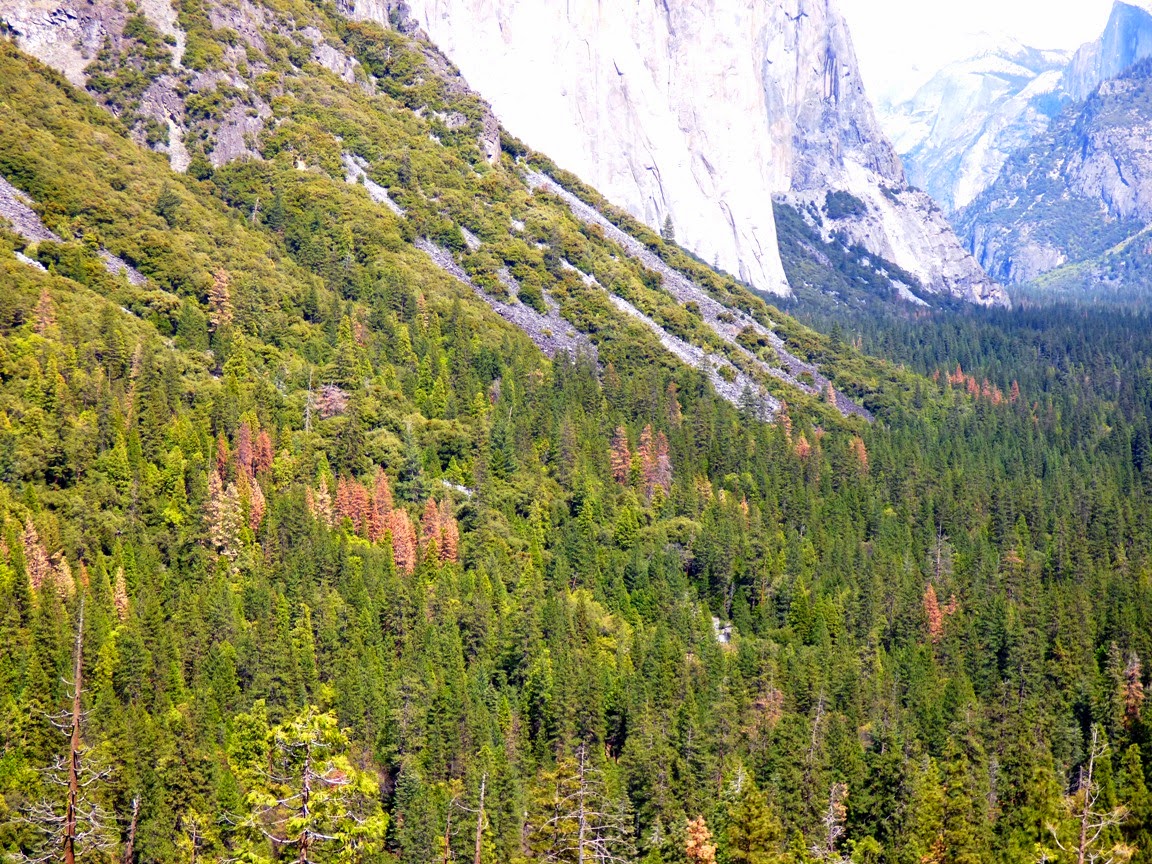 It was incredibly beautiful up there as it always is, but there were signs of a stressed environment. The forest is showing large patches of dead and dying trees. Dry spring conditions mean the trees have less sap to fight off pine-borer beetles which are then able to kill the trees. The valley does in fact have too many trees, but I'd rather not see them die off this way.
There is still water in the waterfalls, but of course they should be booming and flooding, not merely falling. Visitors in the height of summer this year need to scale back some of their expectations. Yosemite without waterfalls is still an incredible place, but they shouldn't be dry by May. 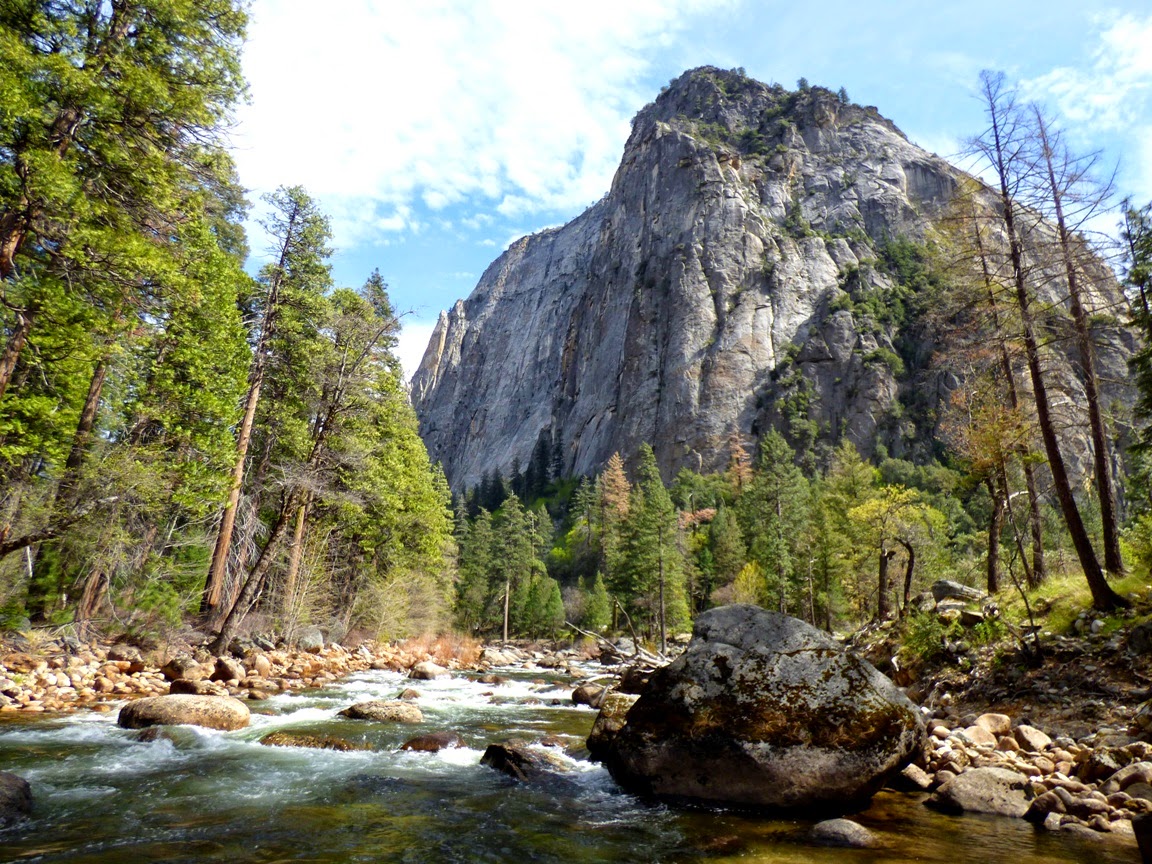 I was able to get a unique view of the Cathedral Rocks from the middle of the Merced River. At this time of year I should have been drowning in the flood, not standing on a rock. 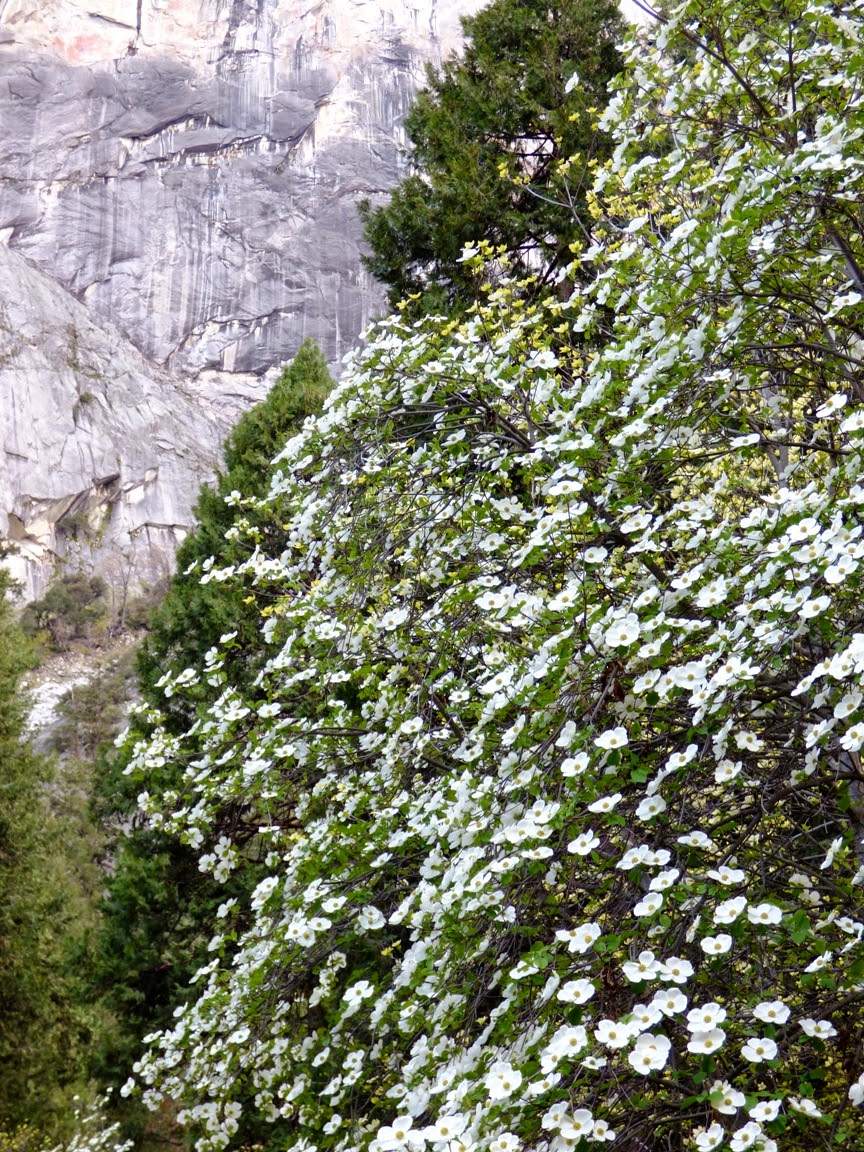 A very pretty sight for this time of year is the blooming of the Dogwood trees in the valley. The white "petals" aren't actually flowers, they are modified leaves. The actual flowers are at the center. I have to admit it's been awhile since I've seen such a colorful explosion of the flowers. 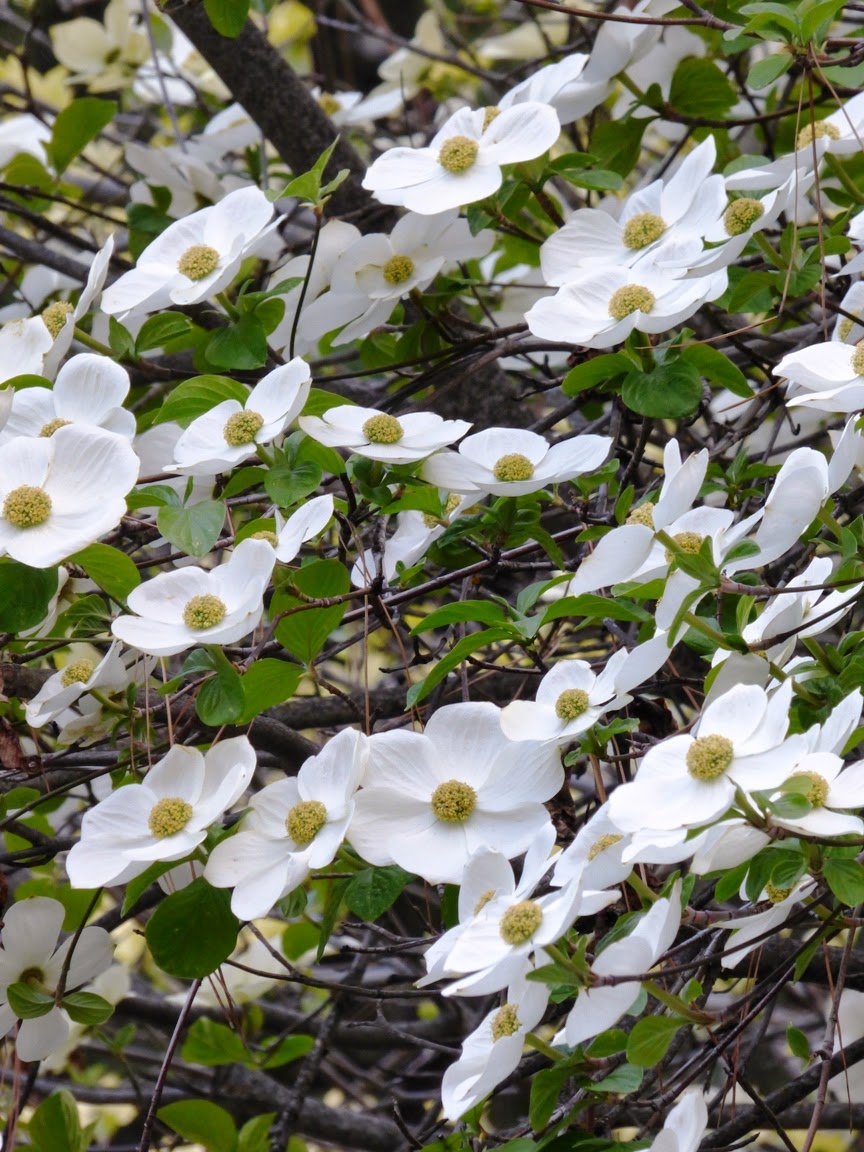 The Redbuds were mostly past their main blooming period, but there were still a few of them around. 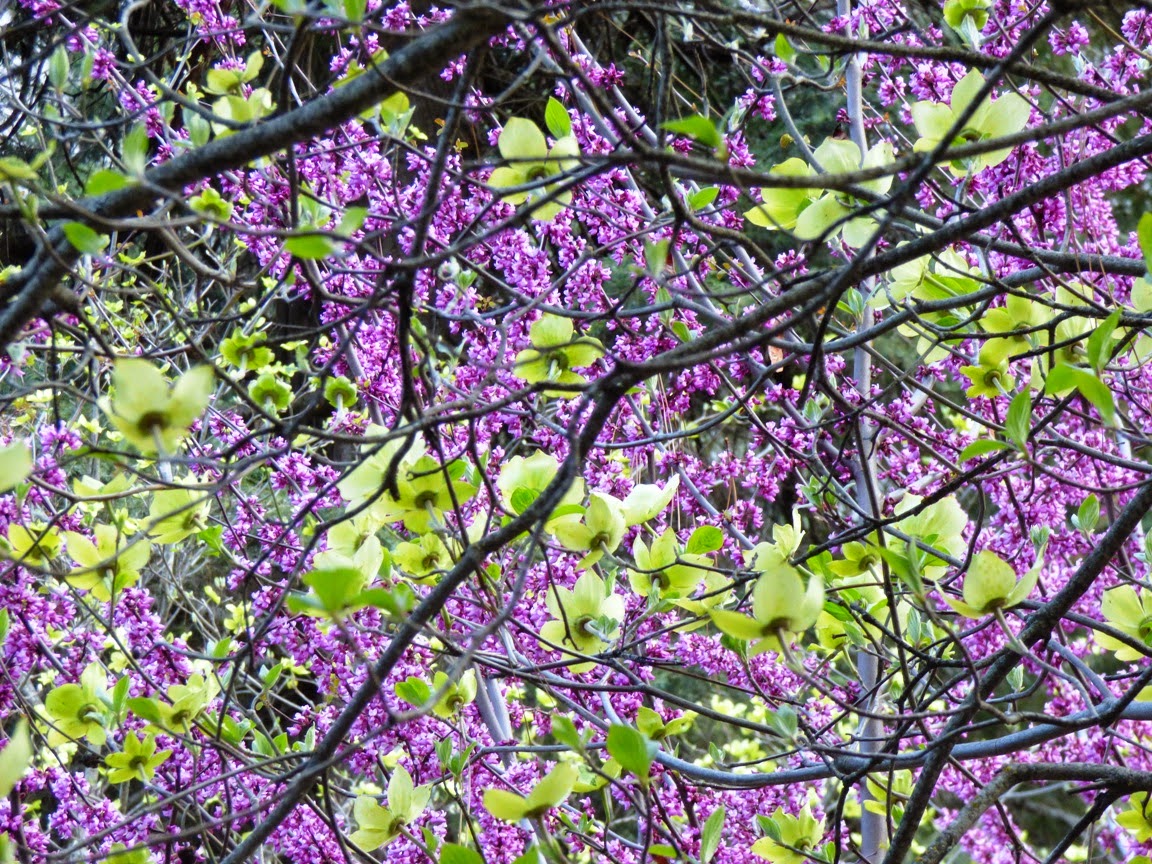 The rocks are more or less eternal, though, at least from human standards. They could care less whether there is a drought or not. Some rocks will come tumbling down here and there, but in a thousand years, the valley walls will look pretty much the same. Below is North Dome from Curry Village. 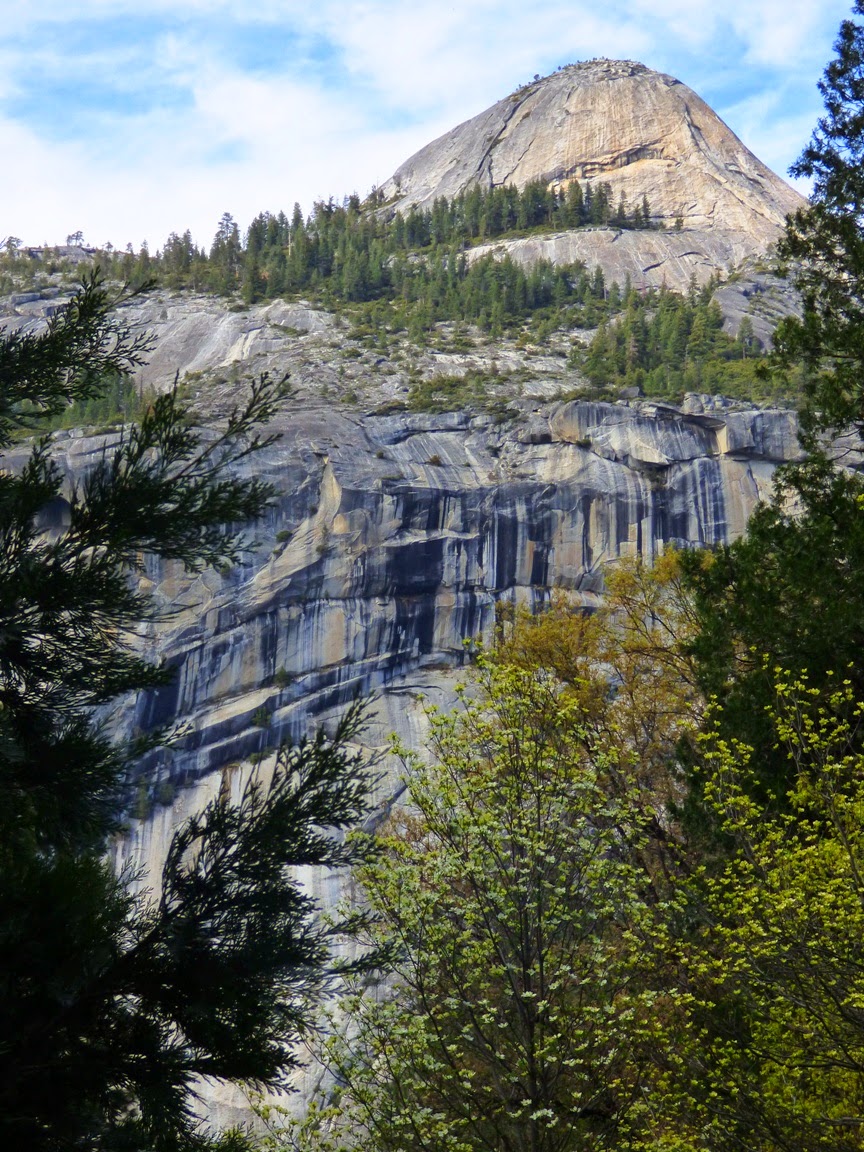 The meadows are green, but are already showing a bit of brown in places. It's really been dry. Below is Stoneman Meadow, with Royal Arches, North Dome, and Washington Column behind. 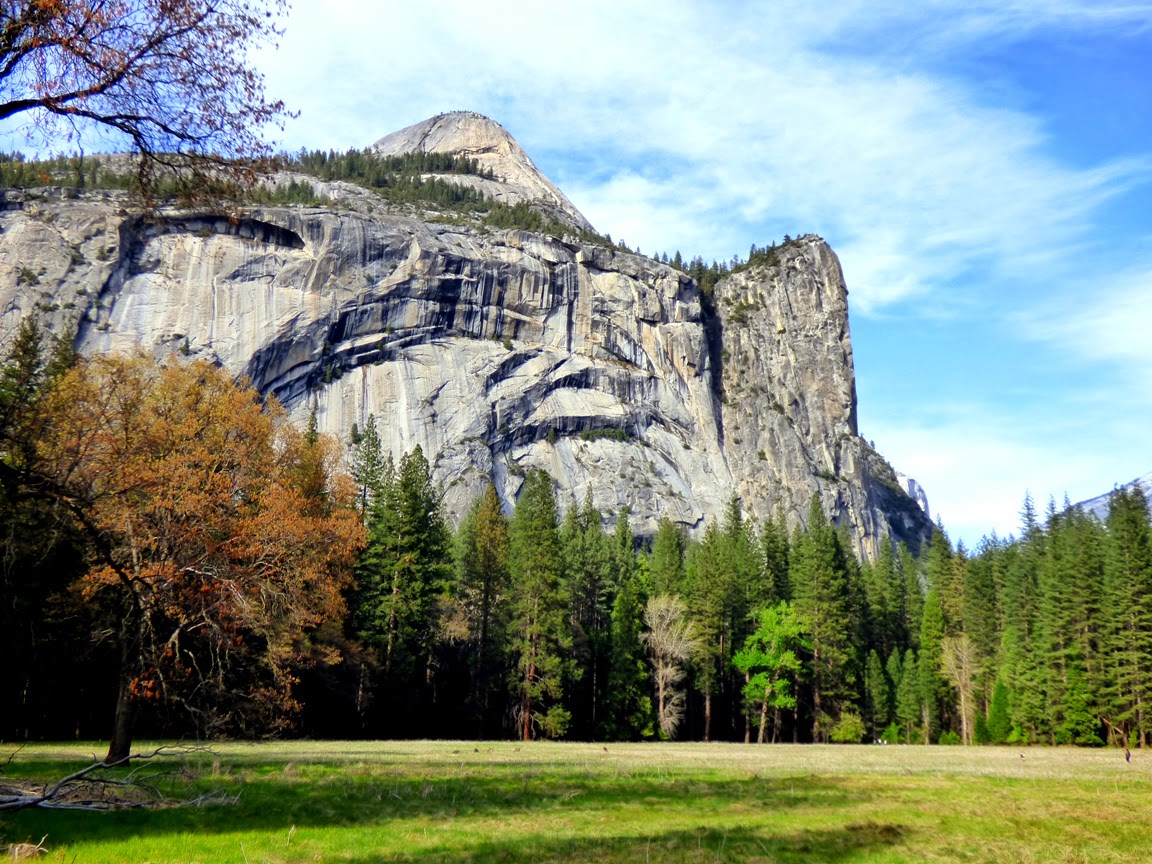 The bridges of Yosemite Valley are beautiful human works of art. The placid Merced River flows under Stoneman Bridge with the bright green of newly awakened Cottonwood trees in the background. As pretty as it is, the river should be surging and flooding right now, not flowing gently. 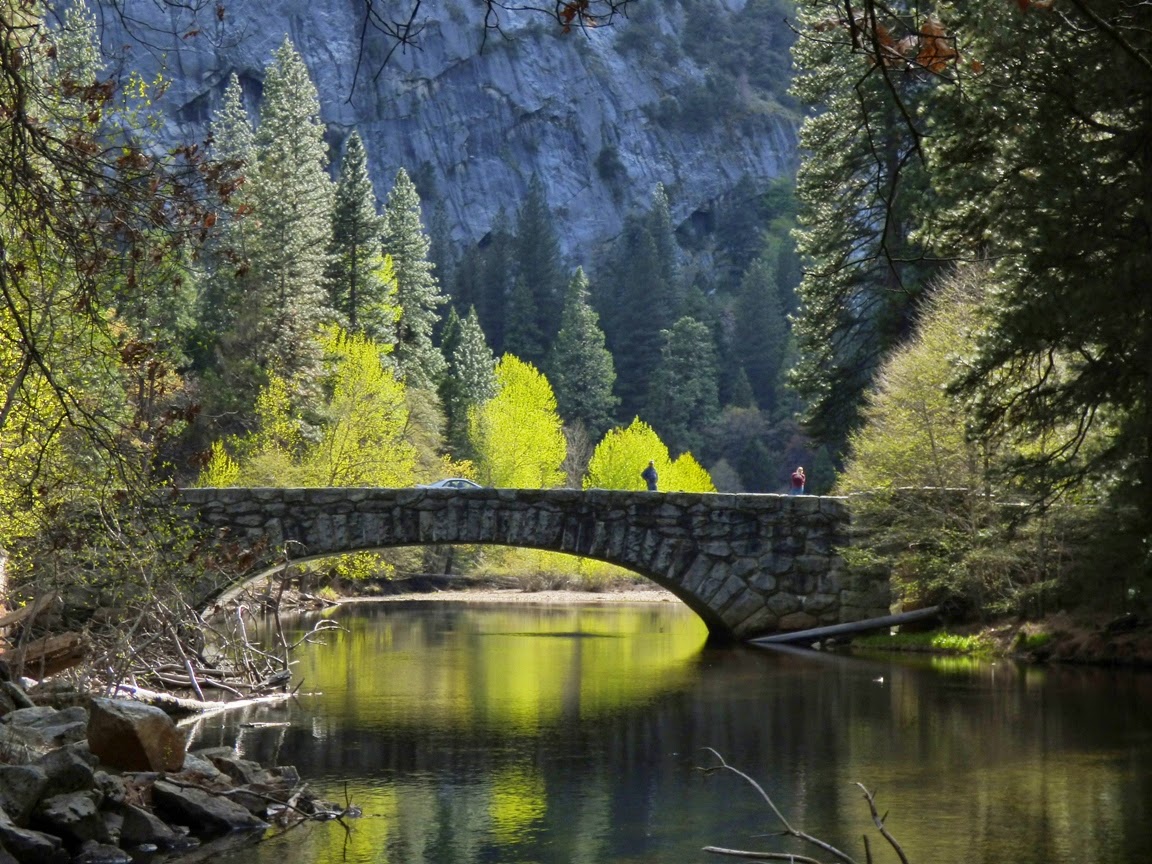 And that's why I want to deny the reality of the horrific drought. I don't want the summer to come, I don't want the rivers to be dry, I don't want the forests dying from beetle kills or from apocalyptic wildfires. Changes are coming to this beautiful valley that I don't really want to contemplate. I want it to thrive. But we'll see. The walls of rock will always be there no matter what happens, standing like sentries over the plants, trees, and animals on the valley floor below. Including the only slightly furry ape-like creatures running around in bermuda shorts with cameras in hand.
Posted by Garry Hayes at 12:28 PM

I love all of the beautiful pictures on how the nature of California speaks for itself. I agree with the author on how it is hard to believe about the drought in California with how healthy all the plants are in the photographs. Hope you guys get some rain out there soon.