Driving Through the Most Dangerous Plate Boundary in the World: Welcome to Geology's Junk Drawer


I'm pretty sure every household has a junk drawer. It's that place where objects that we can't or won't get rid of accumulate. It's a mixed up drawer full of screws, paperclips, old receipts, coupons, expired credit cards, coins...they all end up collected in that one place. And even in the most organized of households, this is the one place where chaos reigns supreme. There is a similar kind of place in the Earth's crust.

One of the great intellectual leaps in the science of geology was the recognition that the Earth is organized, that there are geological processes that follow certain natural laws. Principles like superposition, lateral continuity and original horizontality allowed the early geologists to decipher the geologic history of a region, leading to the first "golden age" of the science in the early 1800s. From the careful analysis of the stratigraphic relationships in a given region, earth scientists were able to construct the geologic time scale, and solve some hugely mysterious problems about how the crust of the Earth operates. They were finally able to understand the origins of most kinds of rocks.

But then geologists came to California, and all the rules seemed to get tossed out the window. While some rock sequences in the state followed the "rules" and formed decipherable sequences (in the Basin and Range Province, for instance), in other places the rocks made no sense at all. In parts of California's Coast Ranges, sequences of rocks were exposed that were upside down, and so chopped up by intense faulting that the layers couldn't be followed for more than a few hundred yards. The continuation of these layers couldn't be found. Rocks showed evidence of extreme depth of burial, 15 or 20 miles, and yet showed little evidence of having been heated to any great extent (the Earth is hot enough in many parts of the crust to melt rocks at much lesser depths).

Most of the time, geologic mapmakers define "formations" and "groups", well-demarcated strata that can be mapped, and be clearly distinguished from adjacent layers. They construct geologic maps of these rocks. But faced with the strange rocks of the Coast Ranges, they more or less threw up their hands and called these chaotic rocks the Franciscan Complex. And "complex" was right. There was an entire region on the geologic map of California given over to a disorganized mess of rocks that could barely be subdivided any further (it's the blue stuff on the map below). The rocks found in the complex include a clay-rich sandstone called graywacke, dark colored shale, pillow basalt, serpentine, deep-ocean chert, and the occasional volcano or coral reef.

It wasn't until the theory of plate tectonics was developed (and accepted by the geologic community) in the 1960s that the origin of the Franciscan Complex could be at least partly understood. The outer shell of the Earth called the lithosphere (composed of the the continental and oceanic crust as well as the uppermost part of the mantle), slides slowly over the nearly molten layer in the mantle called the asthenosphere. In some places, the lithosphere splits open, producing volcanic eruptions and new oceanic crusts. These are divergent boundaries. At convergent boundaries, the crust comes together and is destroyed, either by crumpling upwards into high mountain ranges, or by one plate sliding beneath the other at subduction zones. At transform boundaries, the plates of the lithosphere slide past each other. The subduction zone is the site of the largest earthquakes and most intense volcanic eruptions on the planet. They are the most dangerous plate boundaries in the world. Luckily, the subduction zone in central California is extinct and erosion has exposed its interior parts. That's why we are on this driving journey through the old subduction zone.

I've spent the first part of this blog series on the other side of California's transform boundary, the San Andreas fault. Driving south from Stinson Beach, we now reach the rocks of the Franciscan Complex on the Marin Headlands.


The trenches of subduction zones are the collecting place for sediments of the deep ocean as the crust slides into the mantle. Volcanoes and associated coral reefs are sometimes scraped off as well. Sandstone, silt and shale eroded from the nearby continent will also accumulate in the trench. The large chaotic wedge-shaped deposit is called an accretionary wedge.  The Marin Headlands include some of the less common rocks of the Franciscan Complex, ribbon chert and pillow basalt (green and orange on the map above).

The pillow basalts of the Marin Headlands formed at a divergent boundary around 200 million years ago, perhaps more than a thousand miles away, close to the equator. Lava erupting onto the seafloor produces the distinctive lobate shapes that are about the size of down pillows (but are considerably harder!).
As this ocean crust moved on its long journey towards California, small single-celled creatures called radiolarians lived and died in the ocean waters above. As they died, their silica shells sank to the seafloor, slowly accumulating in dense layers of the quartz-rich rock called chert. They formed into distinctive layers about an inch thick, separated by thin layers of clay. The layering was about the thickness of ribbon, giving rise to the name "ribbon chert". 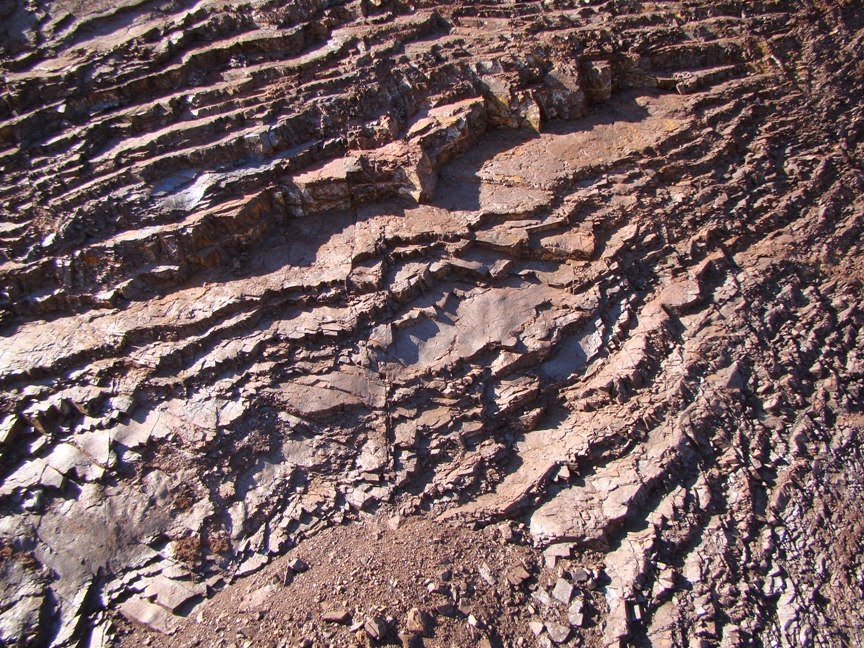 We'll have an exploration of the Marin Headlands in the next post...
Posted by Garry Hayes at 10:43 PM