The Airliner Chronicles: the San Andreas Fault in Southern California

Oh how I love flying. I don't get all that many chances to do it, and flying on days with clear weather happens even less often, but sometimes it works out. One of my first blog series was called the Airliner Chronicles, and in it I featured geology from an aerial perspective. I haven't flown in a number of years, but I had a brief trip to Southern California last month, I scored a window seat, and managed to chose the correct side of the plane, so I got to see some marvelous perspectives of the San Andreas Fault.
What made the views so memorable was that they were in the San Gabriel Mountains, which just a few weeks ago were made into a National Monument. These were the mountains of my youth, the peaks and valley where I learned to camp, hike, and climb. I've seen these mountains from down in the canyons, and from the tops of the peaks, but never so well from high above in a plane. The flight was too short!
The San Andreas fault slices through 600 miles of California, but the most rugged stretch of its path is along the northern edge of the San Gabriel Mountains. The fault actually crosses the Transverse Ranges, offsetting the San Gabriels from the San Bernardino Mountains at Cajon Pass. The presently active stretch of the fault has shifted at least 130 miles in a right lateral sense (when standing on one side of the fault, the other side shifts to the right; a left lateral moves the opposite direction). The grinding of the rocks along the fault produces a powdery material called gouge that is easily eroded. The fault reveals itself as a series of linear valleys that cut across the mountain ridges. I've provided labeled versions of most of the pictures showing the trace of the fault.
I passed the small mountain village of Wrightwood, a town with a lot of geological problems. Not only does it sit directly on the San Andreas fault, it also lies at the base of a steep mountain ridge composed of deeply sheared Pelona schist. When wet, the schist is prone to failure, and there have been a number of serious mudflows over the years including an event in 1941 that buried 190 acres. The scars of the landslides were easily visible from above.

The San Andreas has produced a number of very large earthquakes in Southern California, most notably in 1857, an event with an estimated magnitude of 7.9. The quake fractured the ground for a distance of 225 miles (350 kilometers) from Cajon Pass to Parkfield in the Central California Coast Ranges. The ground shifted as much as 30 feet (9 meters), with an average of 15 feet (4.5 meters). Trees that were damaged in the quake can still be seen in Wrightwood. The average recurrence interval over that last few thousand years has been about century, but it varies widely from a few decades to more than 300 years. It is considered one of the more likely faults to produce large earthquakes in coming decades.
A bit further I could pick out the Mountain High Ski Resort and the deep gorge of the East Fork of the San Gabriel River. The heart of the newly established San Gabriel Mountains National Monument, the East Fork is around 4,000 feet deep, almost as deep as the Grand Canyon.
The canyon is unique. It was the focus of a huge political battle in the 1970s over a wilderness designation that brought much of the canyon under protection from mining and development. There are herds of Nelson Bighorn Sheep and natural trout fisheries in the depths of the canyon tributaries. Development was always a dicey proposition. There is little in the way of flat terrain, and terrible floods have scoured the canyon bottom on numerous occasions. There is a paved "bridge to nowhere" in the lower canyon. The road it was once connected to was washed away long ago. 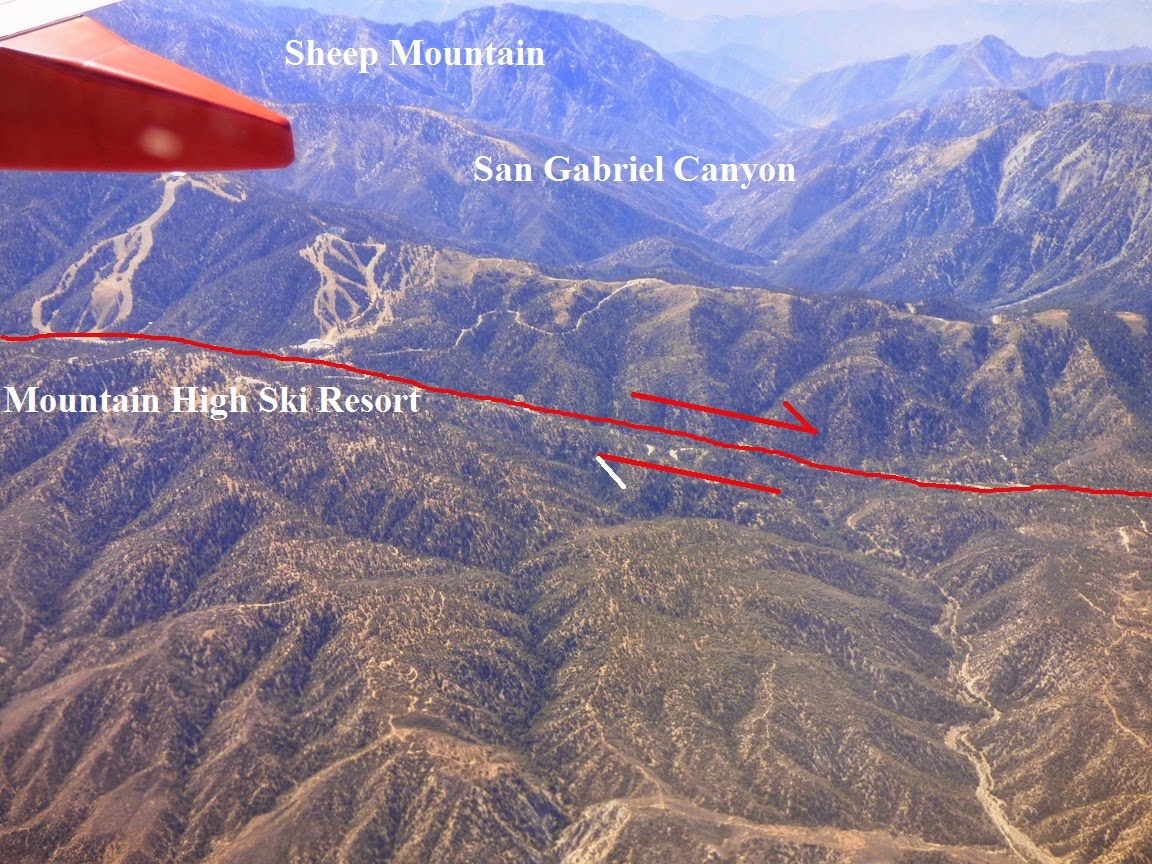 Further west there is a fine example of a shutter ridge. These are mountain ridges that have been moved laterally by the fault in such a way as to block of the river drainages from the other side of the fault, deflecting the streams sideways.
The winding road in the picture is the Angeles Crest Highway, which was opened for traffic in 1956. It is an anachronism, built in a time when development was encouraged in the national forests. It goes for 66 miles from La Canada in the L.A. Basin to Wrightwood. In such steep terrain, keeping the road open is a challenge. Landslides and slope failures are commonplace along the highway.
A special geological treat from the air is Devils Punchbowl, a Los Angeles County Park. The park lies on an ancient strand of the San Andreas fault. The sandstone and conglomerate of the Punchbowl Formation was twisted into a plunging syncline, a downward pointing fold with an axis that slopes to the west (to the right in the picture below).
Devils Punchbowl is a marvelous little park with memorable hiking trails that explore the steep fins of sandstone. You can see some pictures from ground level of the region in this post from last year.
As we neared the town of Palmdale, I could see examples of offset streams. These are stream channels which have been shifted and separated by the lateral motion along the fault. 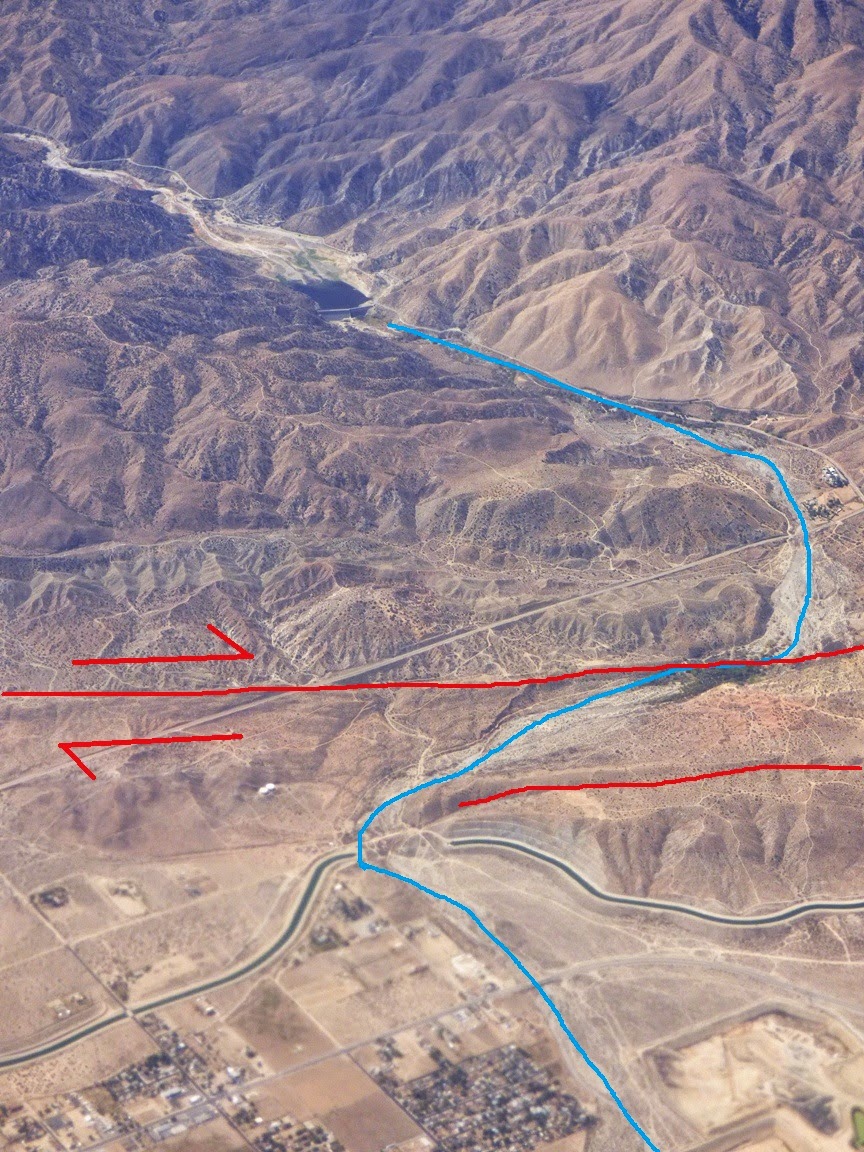 My flight also included a stretch of the fault system a little farther north. I'll try to include it in the next post.
Posted by Garry Hayes at 12:55 AM

I stumbled on this website some years ago. You will probably enjoy the photographs. Oblique aerial images are a nice complement to google maps.
http://geology.campus.ad.csulb.edu/people/bperry/AerialPhotosSoCal/AerialPhotographyIndexMapPage.htm