Northern Convergence: America's Most Dangerous Volcano, and the End of the Journey Northern Convergence as a name for this blog series was all about the role of a convergent plate boundary in the production of the scenery of the Pacific Northwest. The compressional forces that developed as the Pacific/Farallon/Juan de Fuca plate was stuffed under the North American continent formed range after range of complexly folded and faulted mountains hundreds of miles inland. 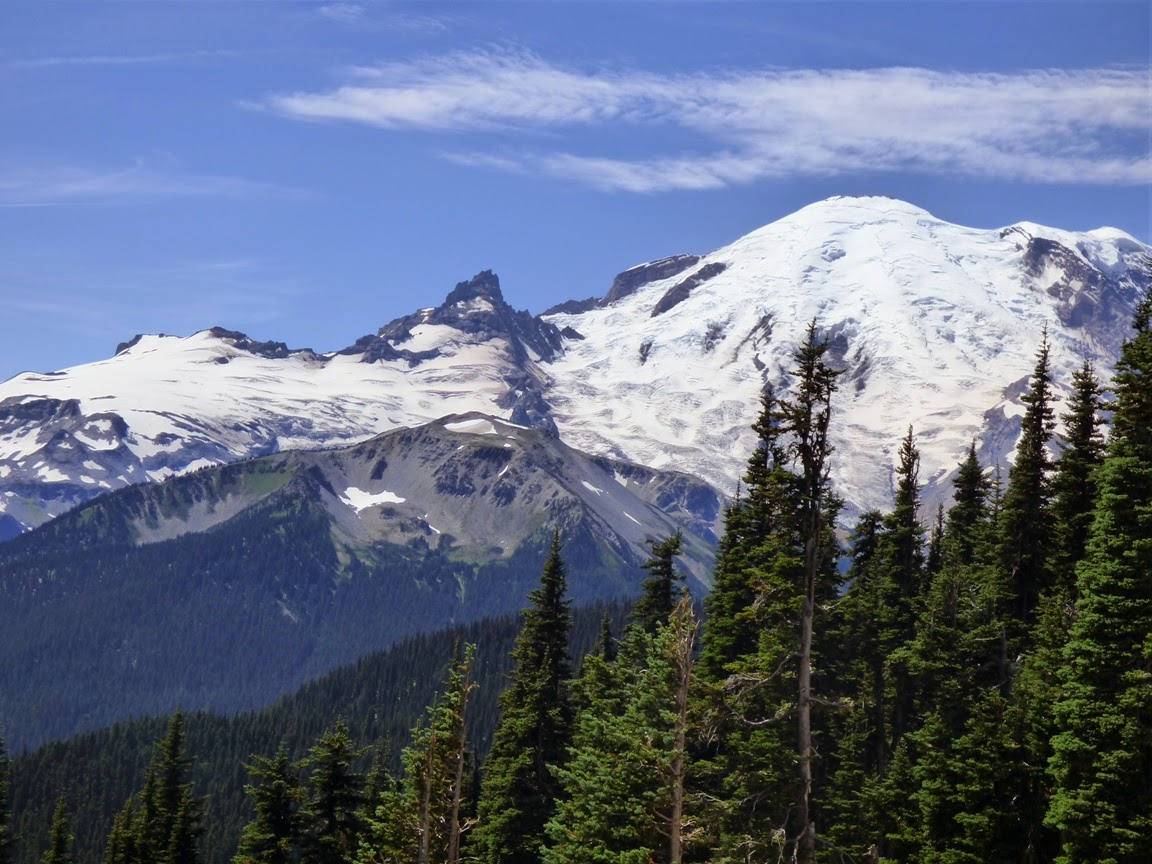 Perhaps the most vivid effect of plate convergence is the formation of a magmatic arc, a chain of inland volcanoes and underlying magma chambers. The oceanic lithosphere carries rock and water deep into the underlying asthenosphere where the rocks are heated, and the water liberated. The water has the effect of lowering the melting point of the mantle rock and plumes of molten magma form, which start moving upwards through the continental crust. Sometimes basaltic or andesitic magmas reach the surface. In other instances, the hot magma melts some of the continental granite, forming dacite or rhyolite.

Volcanism is one of the intense and spectacular geologic processes one could ever hope to witness (or avoid, if you not geologically-minded, or sane). Volcanoes are capable of horrific destruction and disaster, but they also provide rich fertile soils and incredible scenery. We had now been on the road for nearly two weeks, and an important early site for our investigations was to be Mt. Garibaldi and the Black Tusk, two of the northernmost Cascade volcanoes. As I wrote previously, rain and clouds obscured our views that day, and all we ended up seeing were some old lava flows (and, it should be said, some wonderful waterfalls).

As we drove west on our final day, volcanism loomed. We would be passing through Mt. Rainier National Park, and it is hard to think of any mountain in the world that dominates the surrounding landscape the way Rainier does (Kilaminjaro comes to mind, or Mauna Loa in Hawaii, but few others). In stark contrast to our earlier visit at Garibaldi, the skies were crystal clear and sunny.

Rainier rises to an elevation of 14,411 ft (4,392 m), just a bit short of being the highest peak in the lower 48 states, but certainly the highest in the Cascades (only Shasta comes anywhere close at 14,179 feet). Glacial erosion has ripped away hundreds of feet of rock from the summit area, so at one time it was almost surely the tallest mountain in the lower 48 (one more contender though could be the San Francisco Peaks in Arizona, another stratovolcano missing thousands of feet from the summit).

For all of its grandeur, Rainier is an incredibly dangerous mountain. It contains roughly half of all the glacial ice to be found in the lower 48 states, around a cubic mile. That much ice and a tendency to have eruptions every few hundred years is a frightening combination. Many people think (perhaps influenced by bad Hollywood movies that involve volcanoes) that lava flows are the greatest hazard from volcanoes. They are not; lava flows would hardly be expected to get off the mountain massif itself. Andesite is just too sticky to flow far before congealing.
The ice is another matter. A modest eruption of ash or lava could melt a vast amount of ice, mixing with the ash to form a fast-moving mudflow called a lahar. Over the history of the volcano lahars have had the greatest reach, extending as far as the Puget Sound. The cities of Tacoma, Puyallup, Sumner and others are built on lahar deposits from Rainier (see above). Tens of thousands of people along the drainages below Rainier will have a few tens of minutes to evacuate in the event of a major mudflow. For all its beauty, the mountain is a ticking time bomb. It's also probably one of the most carefully monitored mountains on the planet. I don't doubt that the slightest hint of activity will bring a flurry of evacuations.
We spent a few hours on Sunrise Ridge, but our time was limited. We had nearly completed our journey and some of our people needed to catch flights at SeaTac. We headed down the hill towards Puget Sound. We had seen many wonders on the roads that took us across the Olympic Peninsula, the ferry to Vancouver Island, a rainsoaked drive through the Sea to the Sky Highway, explorations of Banff and Yoho National Park, a sojourn among the ghosts of dinosaurs on the High Plains, and a drive home through the Rocky Mountains and the Columbia Plateau. I had gotten to know an extraordinary group of people, and a small corner of a most extraordinary country, Canada.
Posted by Garry Hayes at 12:24 AM

Several years back the small City of Orting in the Puyallup Valley was mildly panicked by the then mayor who heard a news report about a glacial outburst. He failed to notice the outburst was on Van Trump Creek (southside) that drains into the Nisqually River basin not the Puyallup. At the time I was backpacking on the northside near the Carbon glacier.

Phenomenal, Garry - thanks so much for sharing your travels and explanations. I've enjoyed it tremendously. Sorry for the lousy weather while in parts of BC - but, hey, it's rain forest and it rains a lot. A lot! Cheers. Glad you saw so much that was geologically fascinating.