Athabasca Glacier in Jasper National Park is one of the few places in the world where one can drive to a glacier. It is also one of the most vivid places to see the global warming in action.

We were in the midst of our Northern Convergence journey through British Columbia and Alberta last July when we pulled up at the visitor center for the Columbia Icefield. Up to this point we had seen a large number of small glaciers tucked away in the high peaks of Yoho and Banff National Parks, and we had seen plentiful evidence of past glaciations at nearly all the localities we had been visiting over the previous six days. But here at Athabasca Glacier, we were confronted with ice. Lots of ice, just a short distance from the end of the road. It was not unlike stepping out of a time machine into the last ice age.
One of the first issues that we were confronted with is global climate change. The Earth is warming up at an alarming rate, and the warming couldn't be made clearer than the fact that Athabasca Glacier is shrinking. Since the 1800s the glacier has receded more than a mile, forming a new lake, Sunwapta. It was visibly shorter than it was on my last visit in 2005 (see a comparison below). 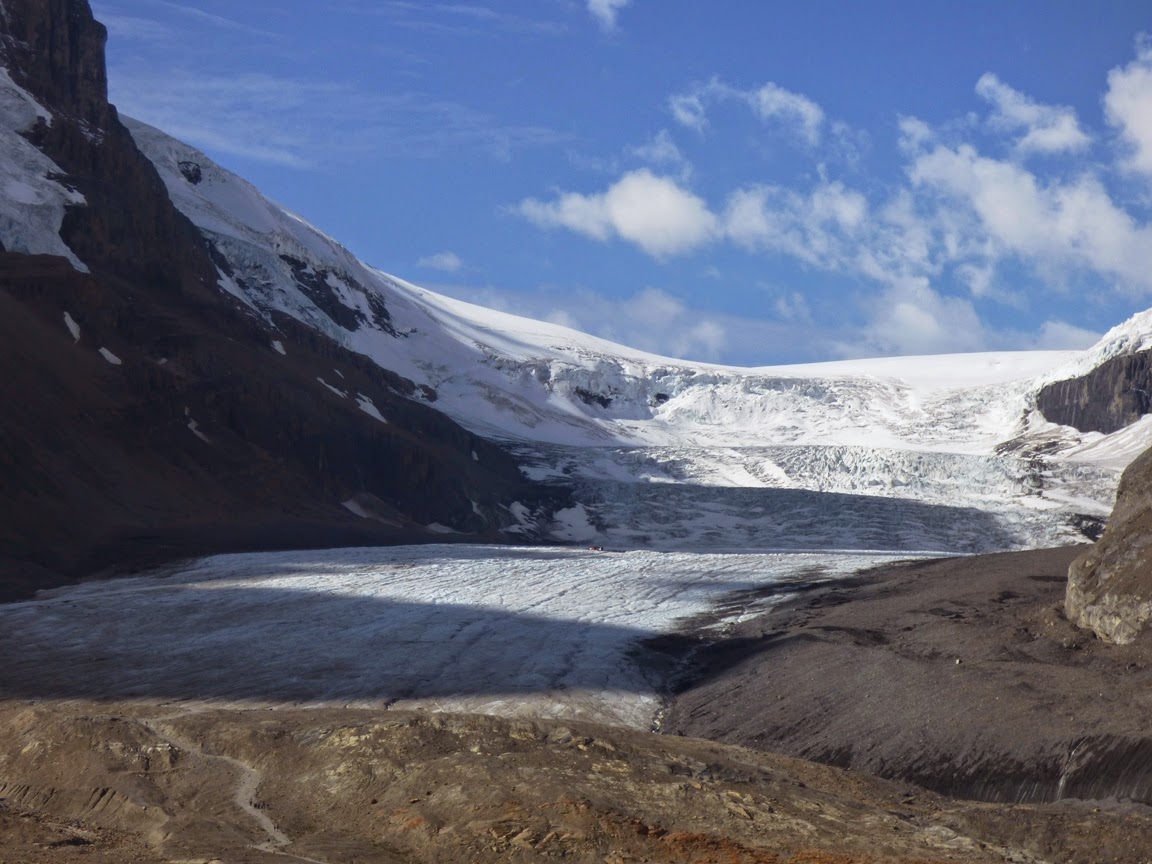 We took in a brief overview of the glacier from the visitor center complex along the highway. We then crossed the highway and parked at the base of the rocky knob in the photo above. 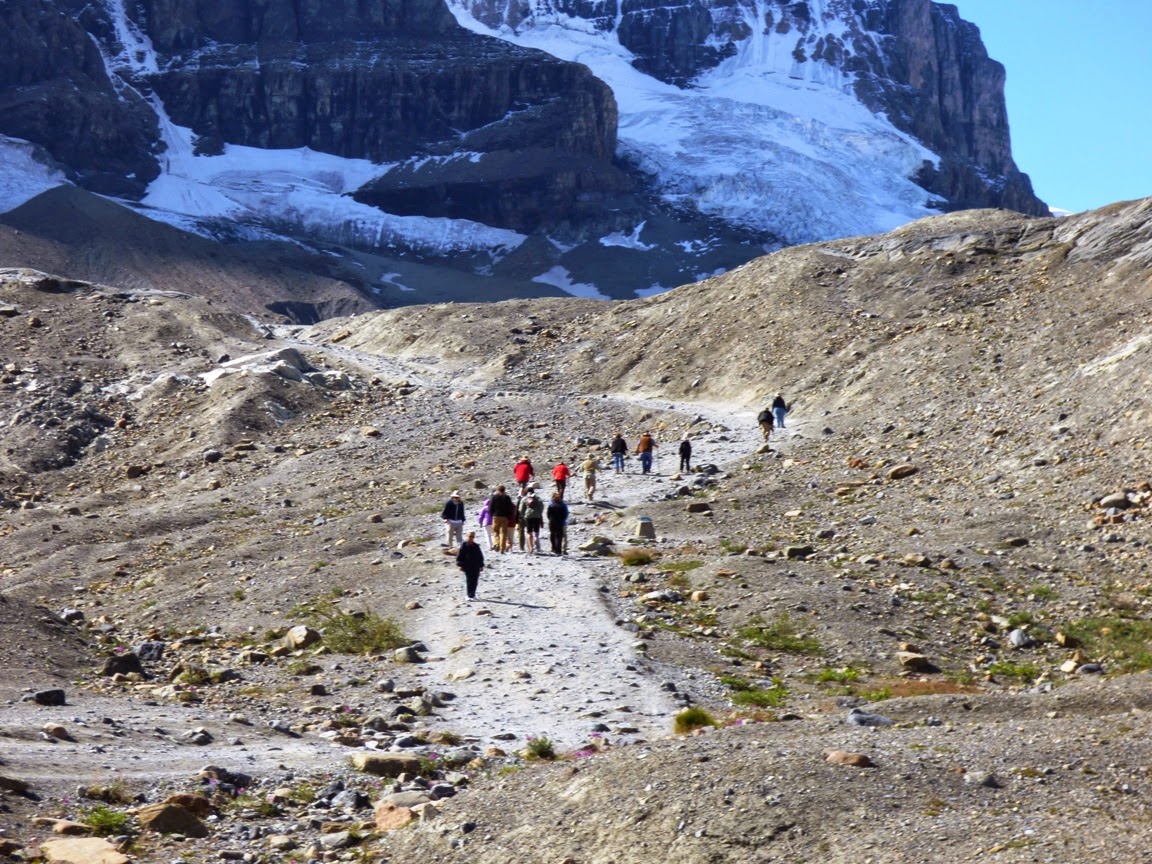 We started up the trail, which was steep in a few spots, but not overly difficult. 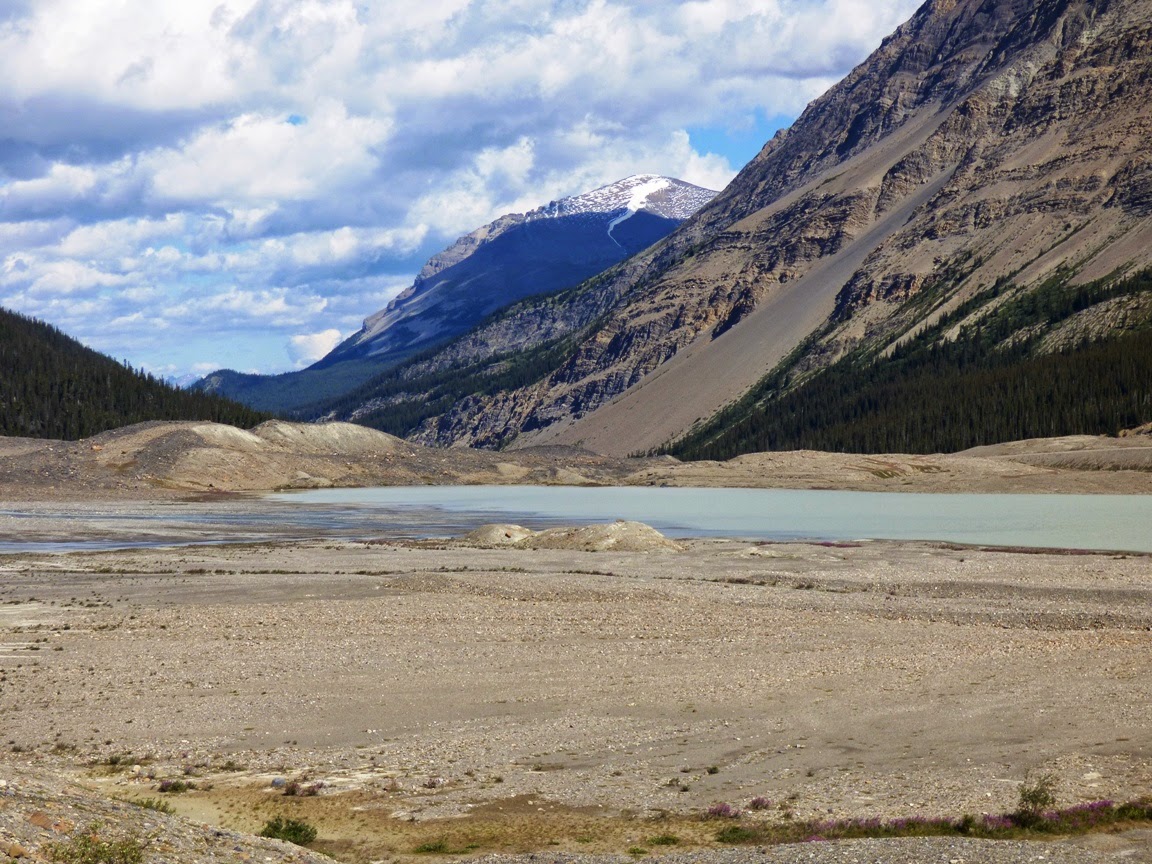 Looking behind as we climbed the slope we could see Sunwapta Lake, which did not exist prior to a few decades ago. Note the barren flats. There should be trees growing at this altitude, but the rocky debris and till has not had time to develop soils. This is a newly exposed landscape. 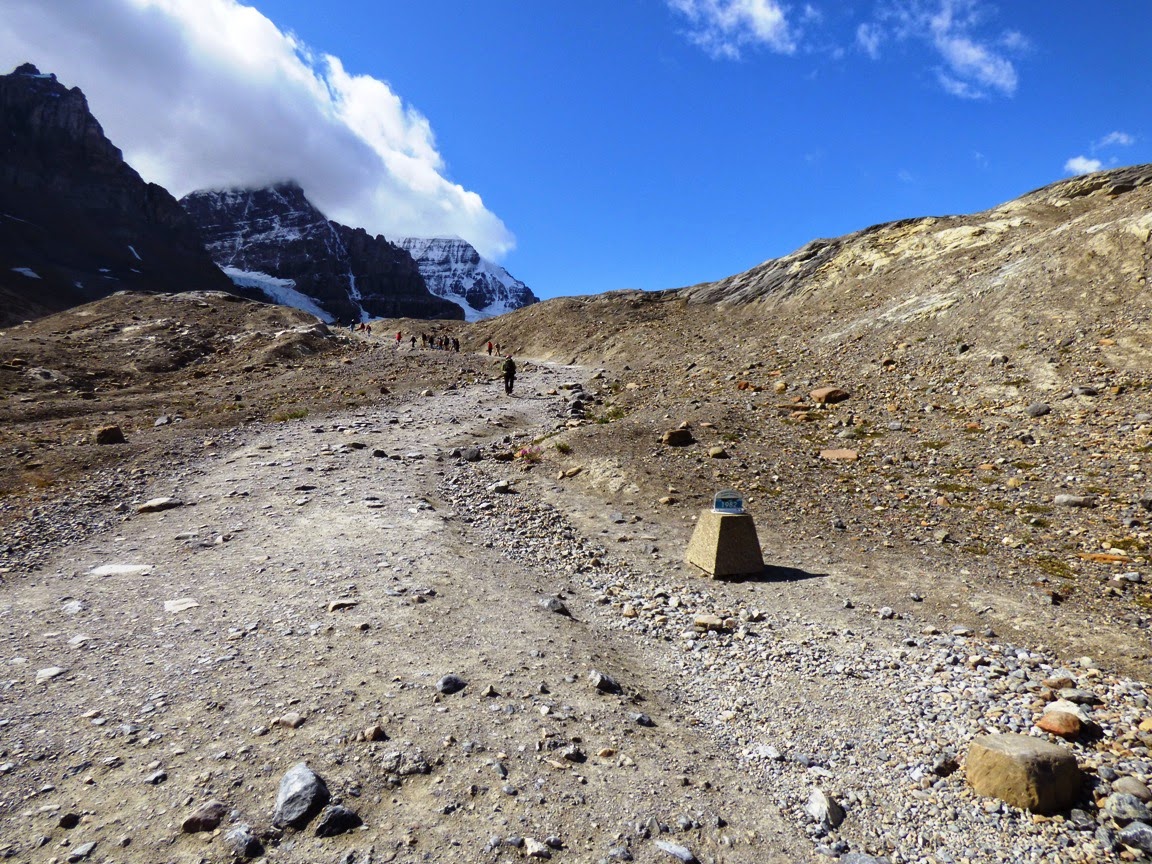 A marker along the trail appeared. It's message was rather stark. Only three decades ago, ice covered this spot. 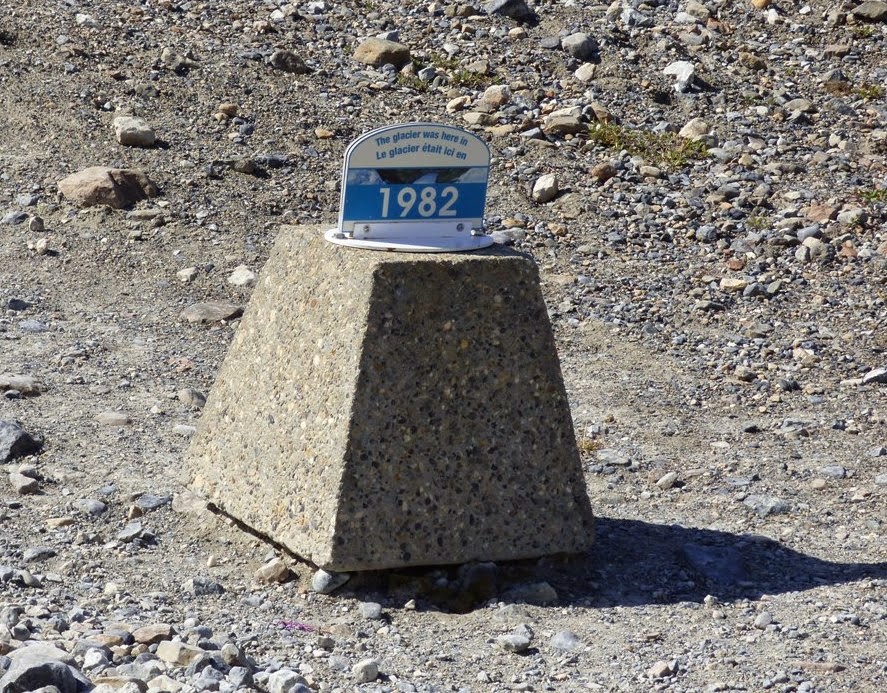 The bedrock marks the passage of the ice in the form of striations (scratch marks from sand particles in the ice), and grooves. 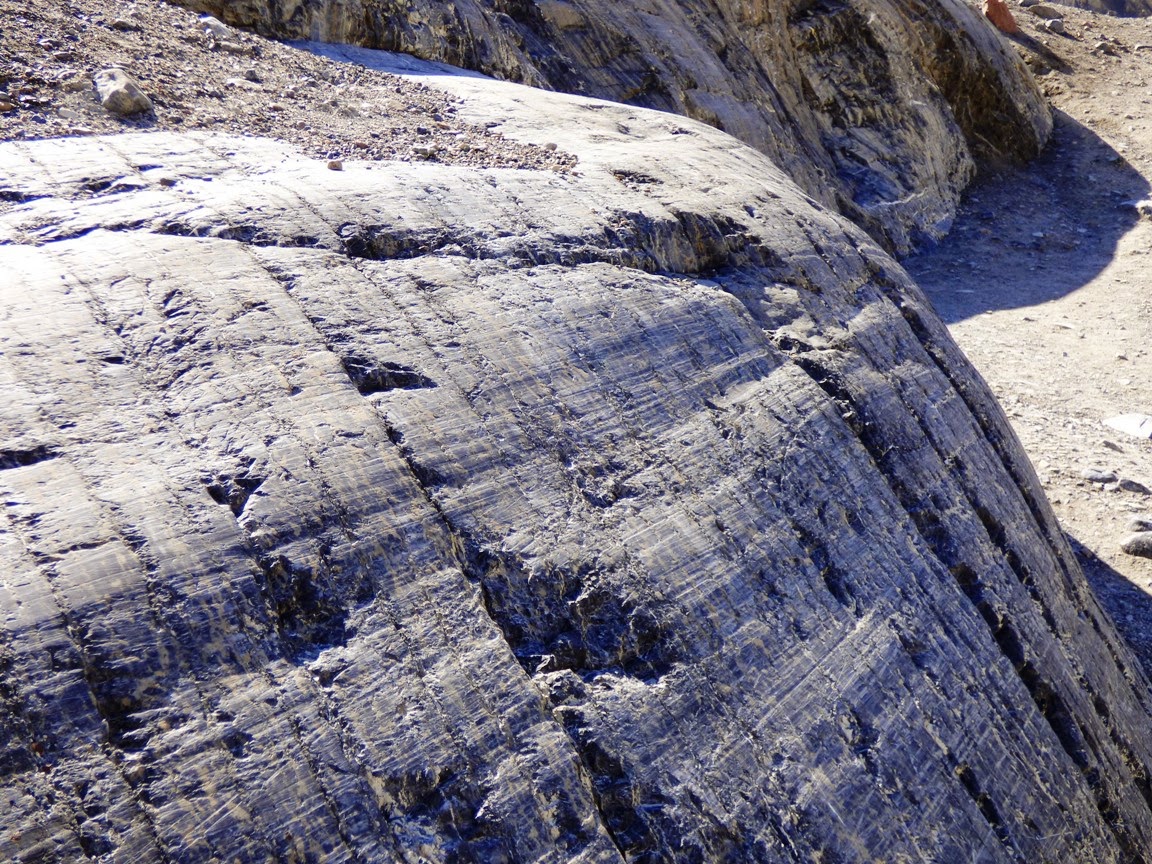 We reached the top of the hill, where the ice existed as recently as 1992. Despite the decline in the size of the glacier, it is still an impressive sight. The ice ranges in thickness from 300 to 1,000 feet (roughly 100 to 300 meters). The crevasses mark the places where the ice is moving over a steep dropoff. 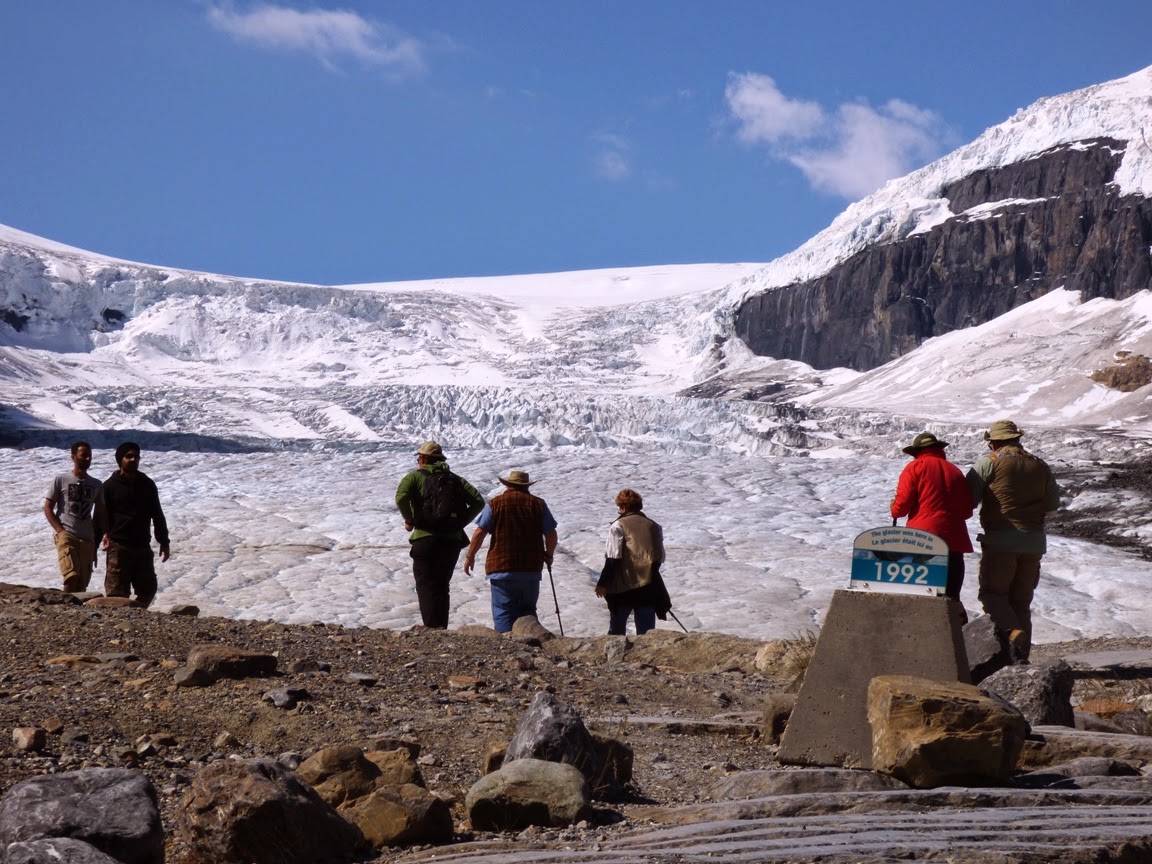 Large lateral moraines line the sides of the glacier. If it were not receding so rapidly, it would also have a terminal moraine around the end. 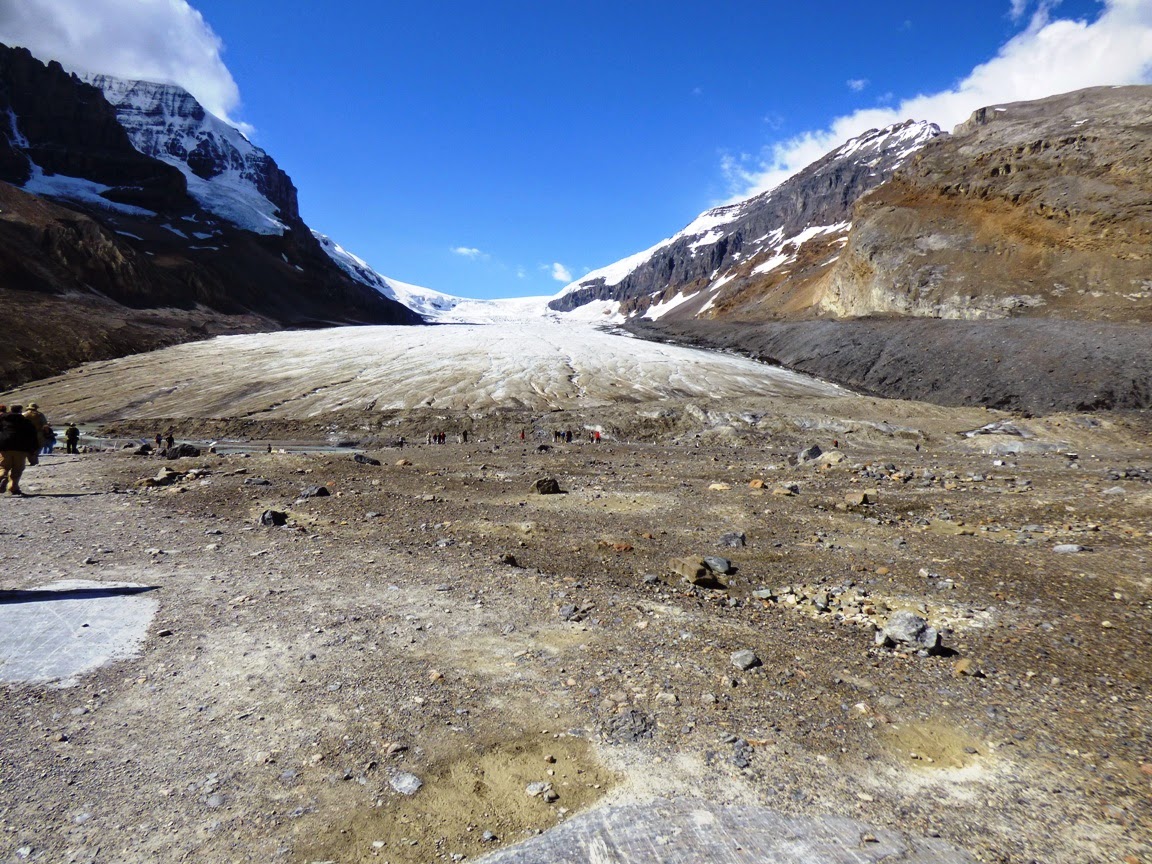 As we approached the terminus, we could see the swollen river of meltwater emerging from the ice. The river blocked easy access to the ice. There were a few boards to make a rudimentary bridge, but sternly worded signs warned of the dangers of actually going out onto the ice itself. Death, you know, from falling into crevasses and through thin ice (and yes, it happens).
The entire area covered by the river water had been covered at the time of my visit in 2005. Getting on the ice was easier, even encouraged, at the time. Not anymore.
Much of the snout of the glacier was covered with dirt, boulders and debris exposed as the glacier melts. 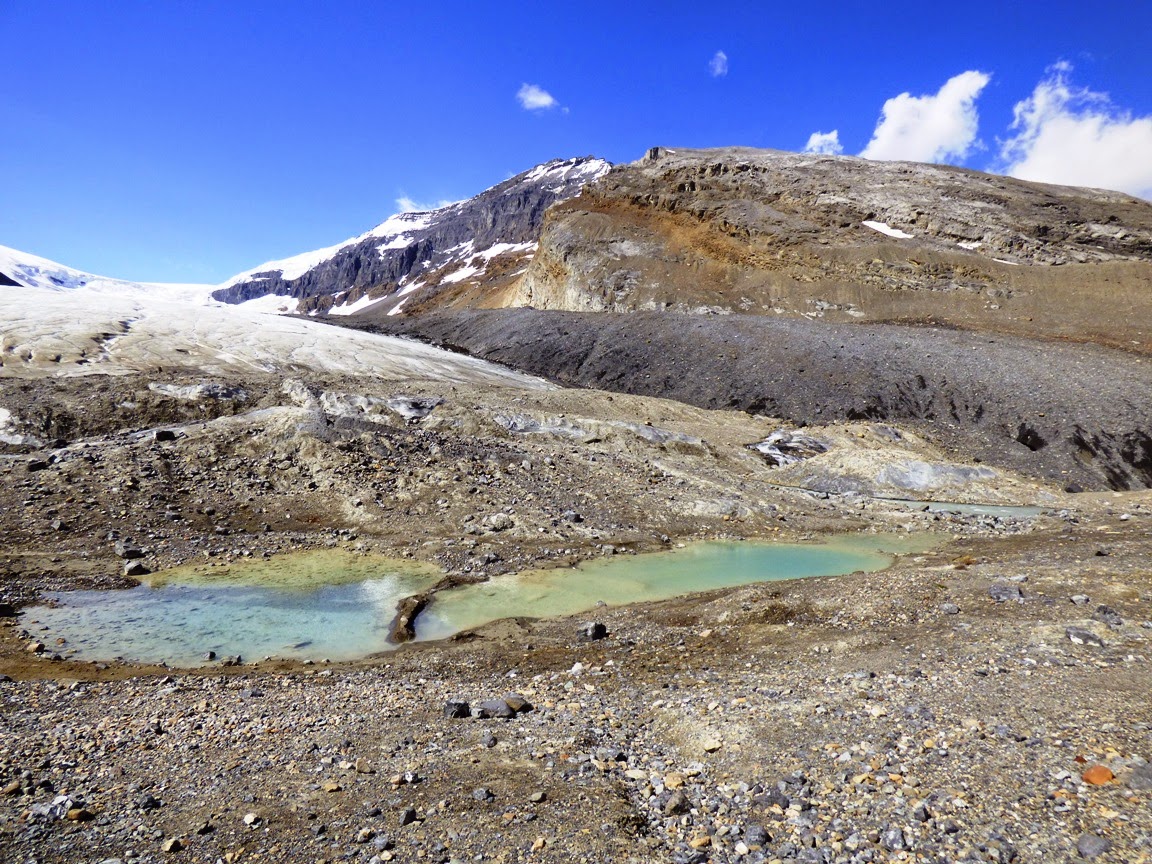 The glacier is "fed" by the Columbia Icefield, a vast expanse of ice covering 125 square miles (325 square kilometers) between some of the highest peaks of the Canadian Rockies. Six major glaciers flow from the huge mass of ice coating the high divide. Meltwater from the glaciers flows to the both the Pacific and Atlantic Oceans, as well as Hudson Bay and to the Arctic Ocean (thanks, Howard, for the correction). The icefield lies east of a gap in the Columbia Mountains that allows Pacific storms to drop prodigious amounts of snow each year, around 30 feet (ten meters). 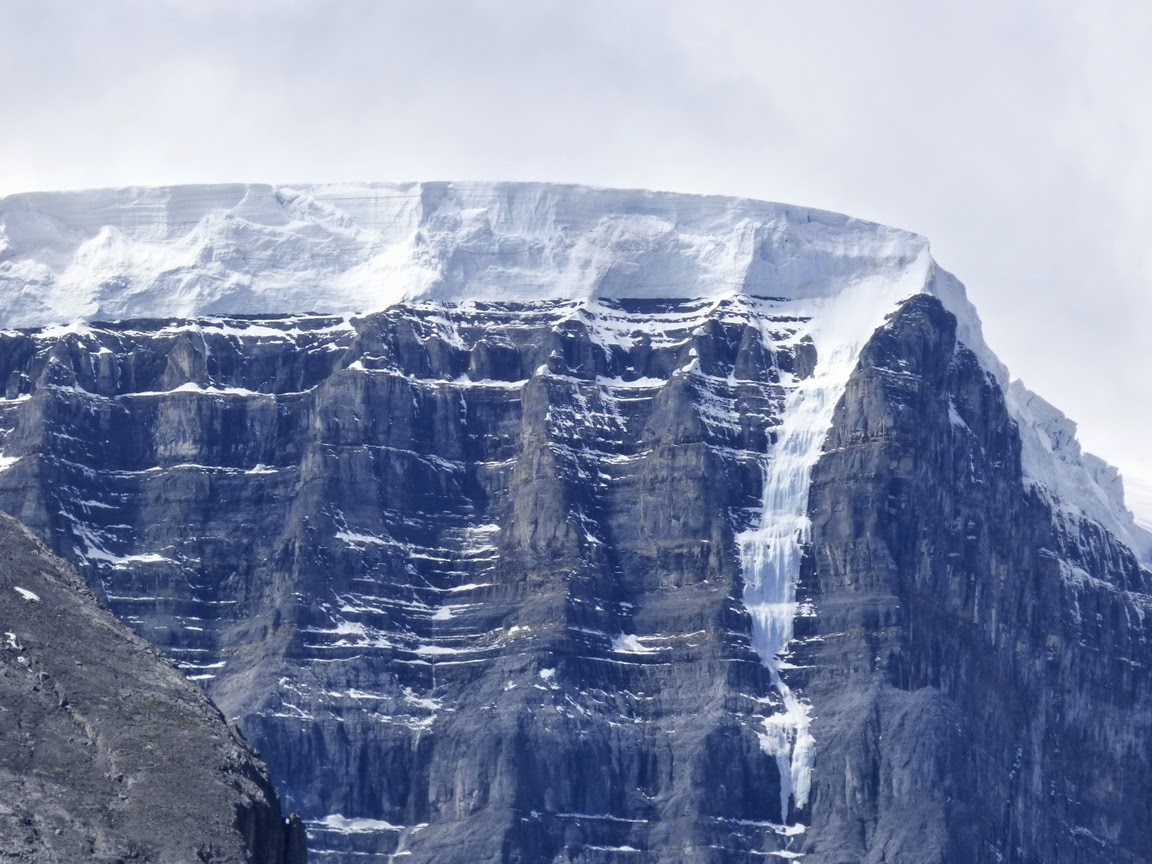 In some places the chunks of ice simple fall off the cliffs into the cirques below. I saw one of these icefalls on my earlier visit, and was watching closely this time around, but no dice this year. 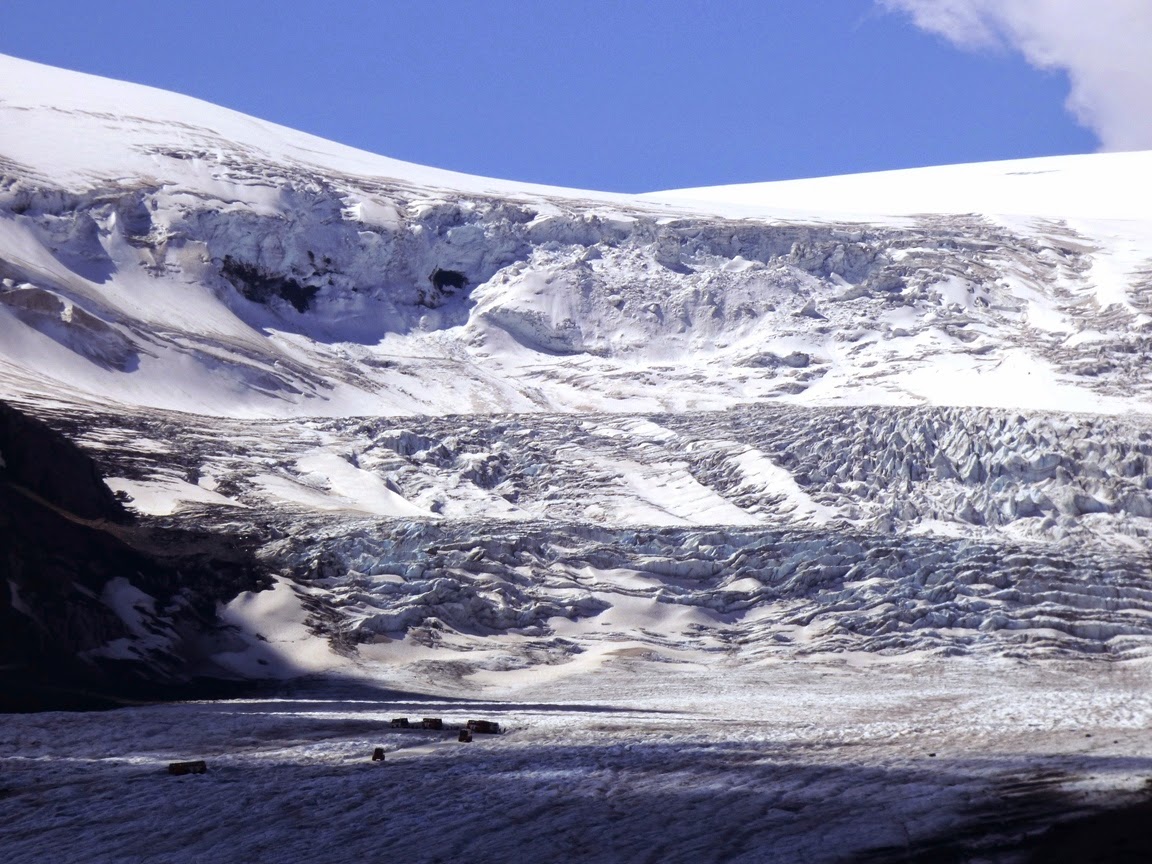 At the rate that the glacier is receding, it will probably be gone by the end of the century. There can hardly be a starker piece of evidence that the Earth's climate is warming. It is as plain as the nose on  one's face, unless you are a politician whose re-election depends on funding from lobbying groups who are paying you to be blind.

We returned to our vehicles and drove down the Icefields Parkway to a new destination: the High Plains of Alberta. We were on the trail to find some dinosaurs...more later.
Posted by Garry Hayes at 7:06 PM

Nice! I'm enjoying this series. As a "local", I have to point out a minor correction: "...Meltwater from the glaciers flows to the both the Pacific and Atlantic Oceans, as well as Hudson Bay..."

The drainage goes to three oceans: the Athabasca River drains northward to the Arctic Ocean via the Mackenzie River and Beaufort Sea. The Saskatchewan basin drains eastward to the Atlantic via Hudson Bay. (And of course to the Pacific via the Columbia basin).

Thanks for the comment! I kinda sorta knew that, but was writing fast and late, so I mixed it up a bit, obviously. I'll be correcting it shortly.