So...what do you get when you take incredibly thick layers of limestone, sandstone and shale that were deposited on the ancient edge of a continent and press them together really hard? Very long story short, you get the Canadian Rockies and Banff National Park. The compression occurred because of the convergent forces around the subduction zone on the west coast of North America during the last 200 million years. In the region of the Rockies, slab after slab of sedimentary rock was pushed up and over the adjacent slabs, producing a rugged landscape of thrust faults and linear ranges of limestone  and sandstone (see the diagram below).
Add in the effect of widespread glaciation during the geologically recent ice ages (the last two million years), and you get a spectacular landscape of jagged rocky peaks and beautiful turquoise lakes. Our field class had been spending most of the day in equally beautiful Yoho National Park, but as the shadows lengthened in the afternoon we headed over Kicking Horse Pass into Banff National Park. Our first stop was Moraine Lake, a lake that may or may not have a moraine.

Moraines are piles and ridges of glacial debris (till) that form around the margins and edges (and sometimes the interior of) alpine glaciers. Moraine Lake, one of the epicenters of tourist activity at Banff, has a most unusual looking moraine. The rocks are almost uniformly large and slabby as if they came from a single source area or cliff. They don't look like a typical moraine at all.

It looks like the feature is either a landslide from the adjacent cliff that blocked off and dammed the lake, or it is a landslide that fell onto the glacier somewhere upstream and was slowly carried to the end of the glacier where it formed into the distinctive mass as the ice melted away.
Small glaciers clung to the high peaks above us. The glacier in the picture above ended at a cliff. As it moves forward, large chunks of glacial ice will tumble down the steep slopes. 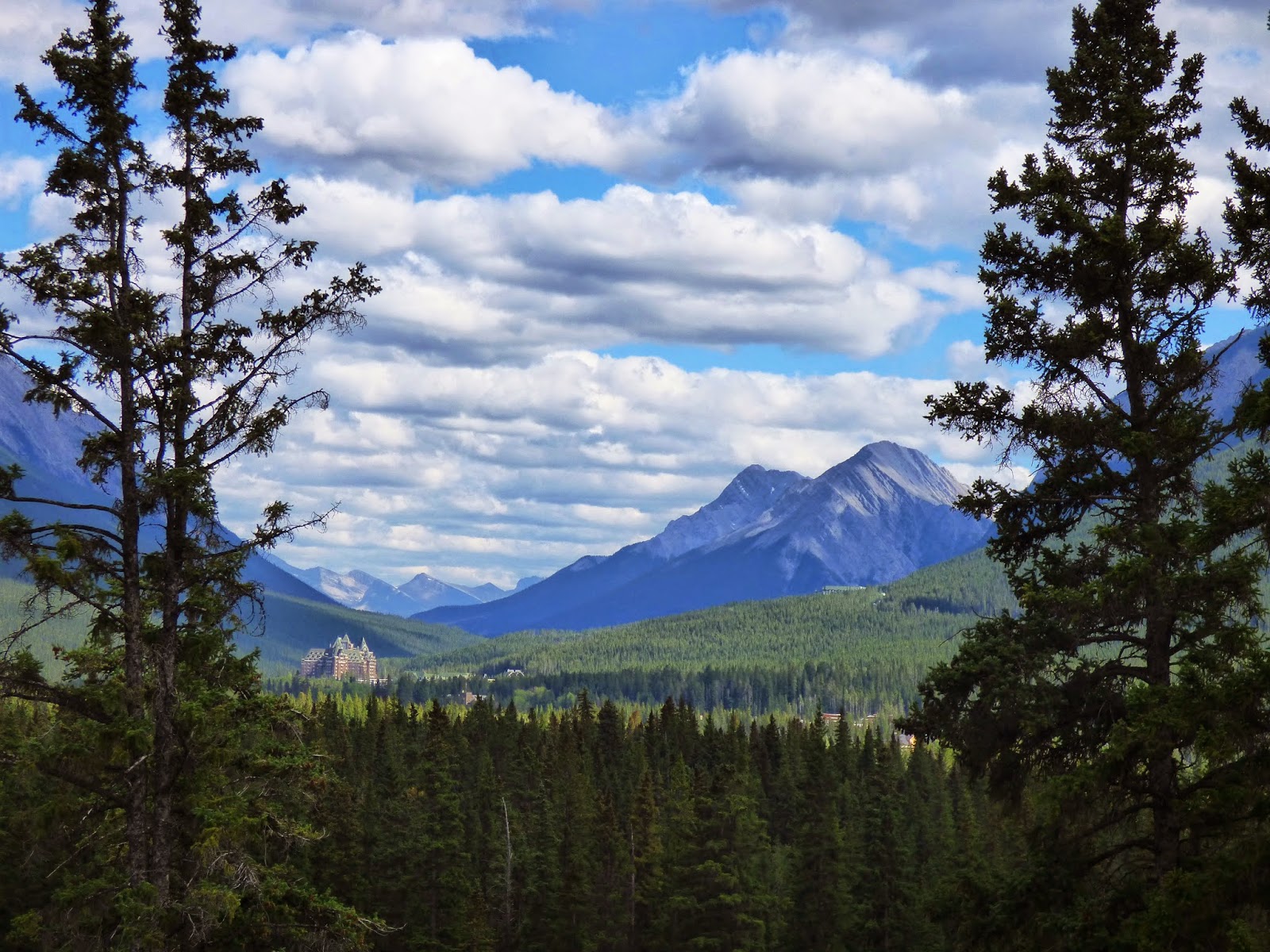 Our evening was spent in a hotel with a glorious view of the peaks above the Banff Townsite. So what did we spend our time doing? Laundry, of course! The view provides a marvelous perspective down the length of the strike valleys carved out along the thrust faults that pushed these mountains upwards. 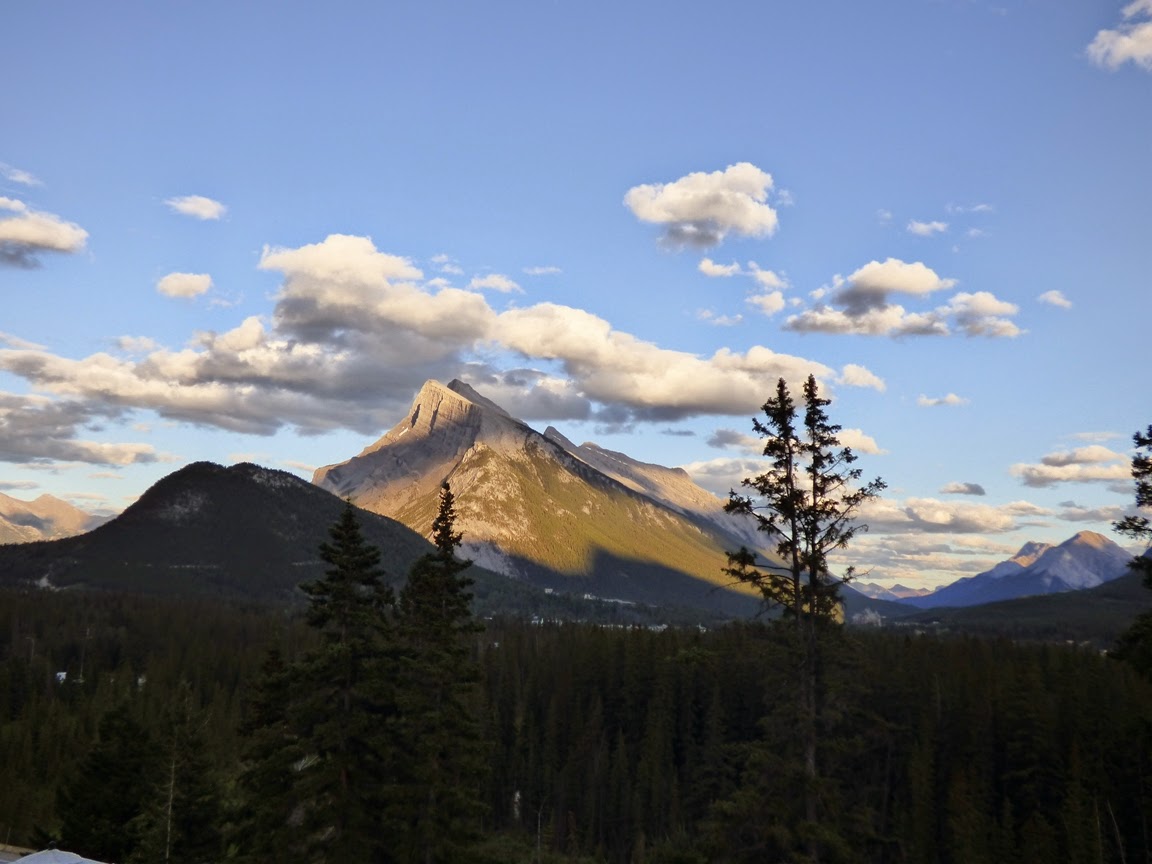 The next day we started north on the Icefields Parkway to get up close and personal with some glaciers and the lakes that have made Banff and Jasper such famous parks. Our first stop was at Bow Lake and Bow Glacier. Like many others, Bow Glacier has been retreating since the late 1800s, and until around 1930 the glacier extended over the cliff. Today there is a prominent hanging valley and waterfall where the glacier once flowed. Total retreat has been about 0.6 miles. 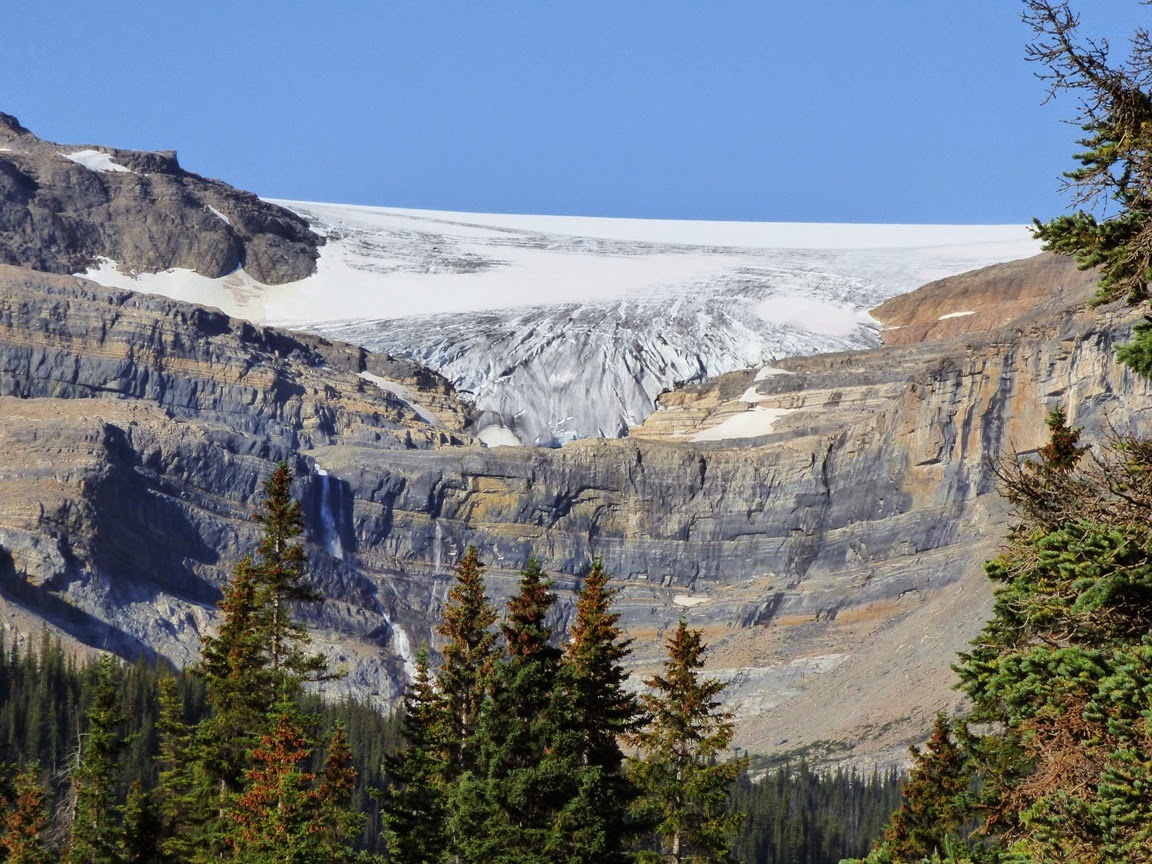 Bow Lake was otherworldly in the calm conditions of the morning. We passed it later in the day and with the winds having picked up, it was completely different. The lake does not have the distinctive turquoise color of most glacial lakes, which arises from the very fine flour-like clay that remains suspended in the water. Since the early 1930s there has been a small tarn (glacially carved lake) at the base of the glacier that has been capturing the sediments before they can flow down into the larger lake.
Later in the day we had a look at one of the most iconic views in all of Banff National Park, that of Peyto Lake (and the Peyto glacier). The lake is justly famous for the turquoise color, which as mentioned above is from finely ground silt and clay suspended in the water. The setting is made all the more grand from the steep rugged cliffs and the long linear strike valley in the distance. 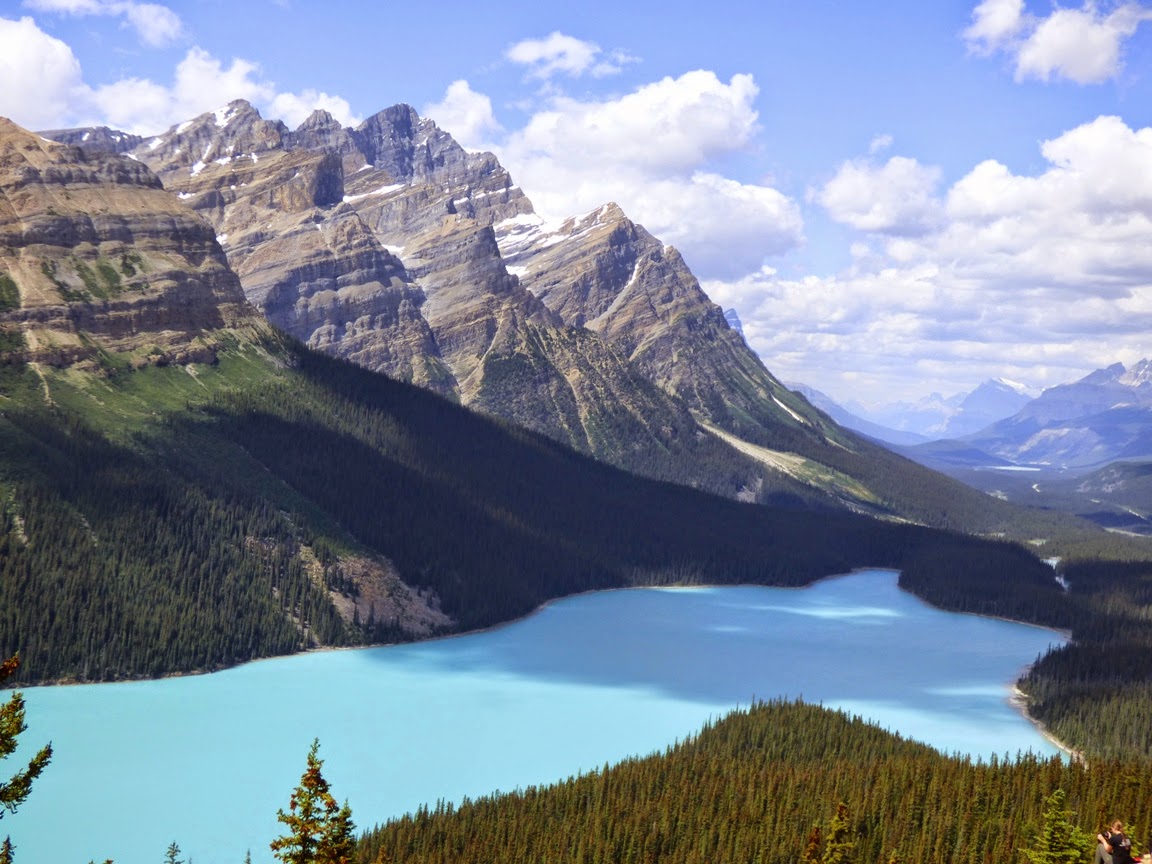 Looking west we could see the Peyto Glacier that feeds the lake. Like Bow Lake, the glacier has retreated during the last century by the same amount, about 0.6 miles. The glacier is actually a composite of two glaciers that flowed together. The black line of debris in the center is the place where the glaciers joined, forming a debris line called a medial moraine. 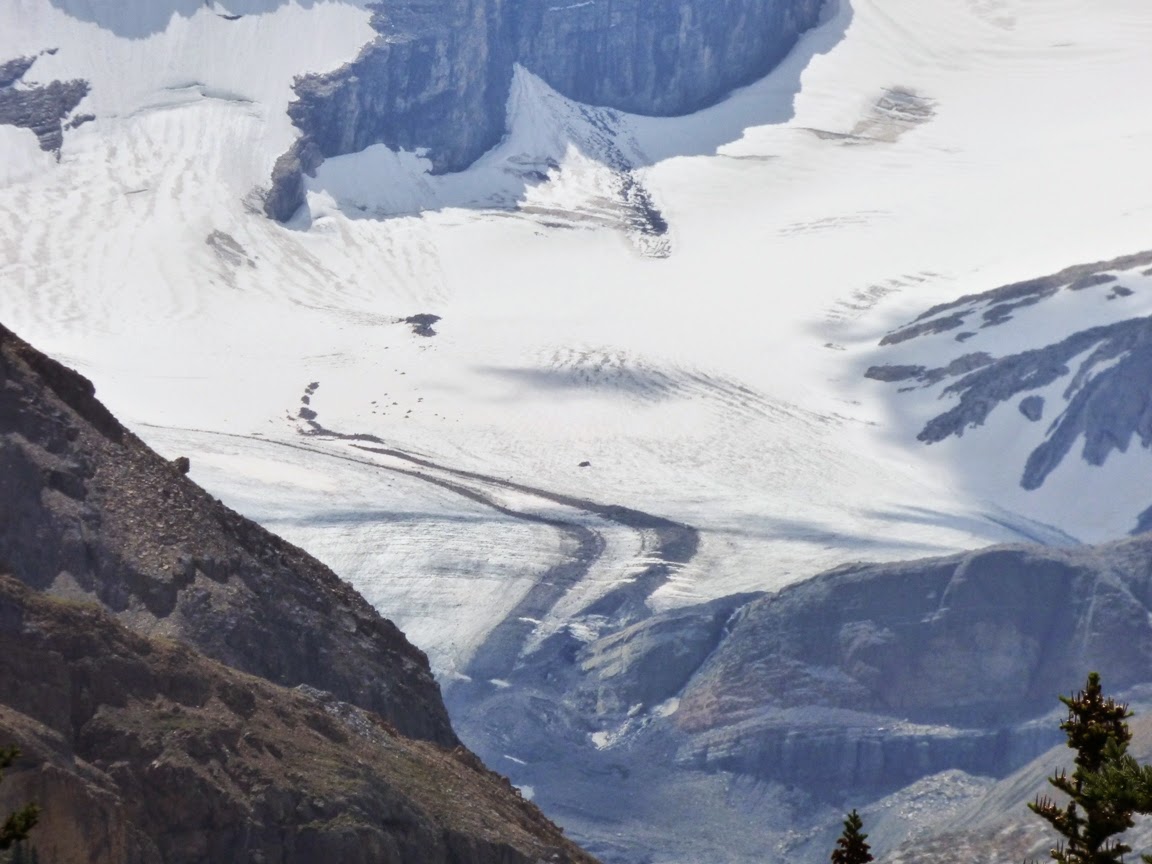 The lakes and glaciers at a distance are wonderful to see, but we were after a more intimate experience with the glacial ice. Our goal for the day was the Columbia Icefield and a stroll around the base of the park's most accessible glacier, Athabasca. That will be the subject of a near-future post.

If the pace of posting has seemed low of late, that would be because I'm in the midst of field trip season, with a trip to the eastern Sierra Nevada a week and a half ago, a trip to Lake Tahoe last weekend, and a trip starting tomorrow to Sequoia and Kings Canyon National Parks. The trips keep me busy, but also provide a lot of material to post! See you again on Monday or Tuesday!
Posted by Garry Hayes at 4:35 PM