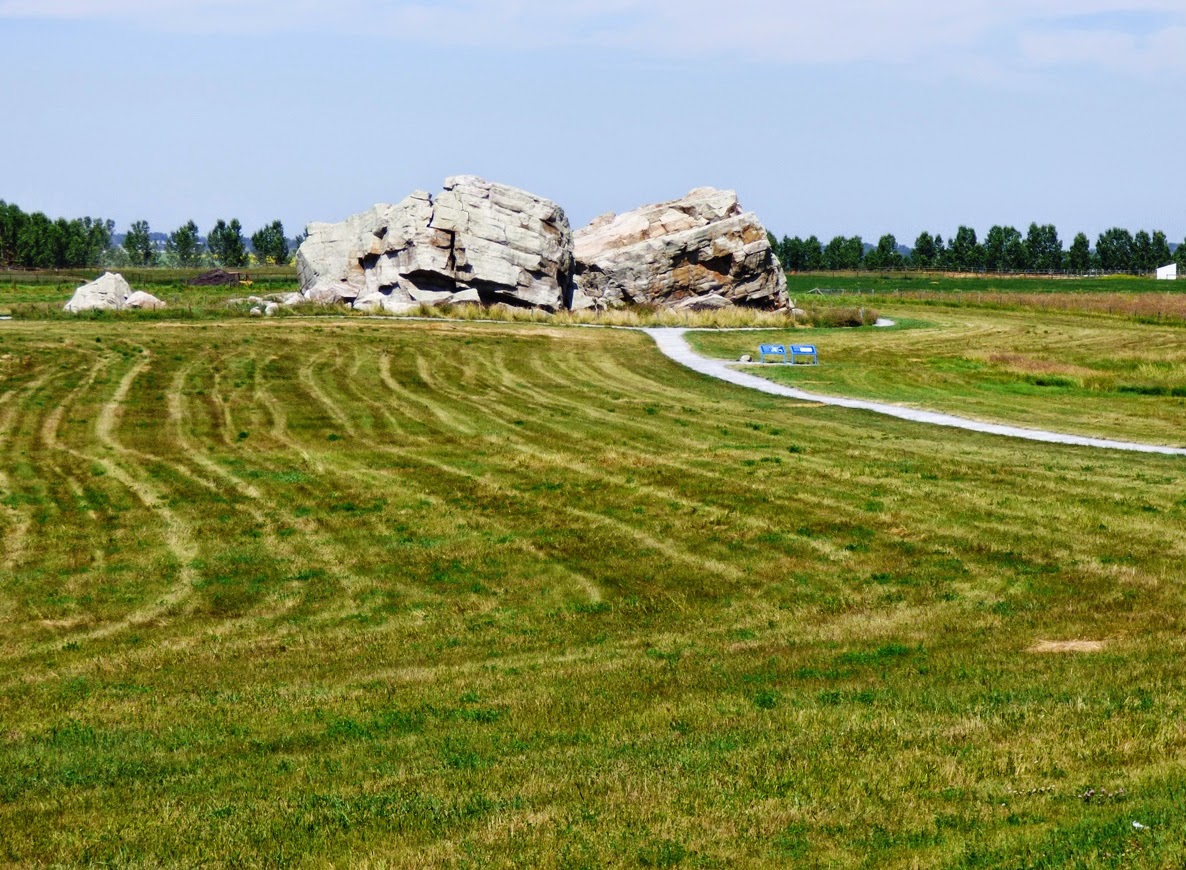 There is a big rock out on the high prairie near Calgary, Alberta. That all by itself is a bit of strangeness. It's even more strange because it is around a hundred miles (160 km) from the cliff in which it originated, up in the Rocky Mountains in Jasper National Park. The Blackfoot Indians had a creative name for the rock, Okatok, which in their language means, um, "rock". These names always sound better in the original language! For whatever reason, the spelling changed a bit to Okotok. 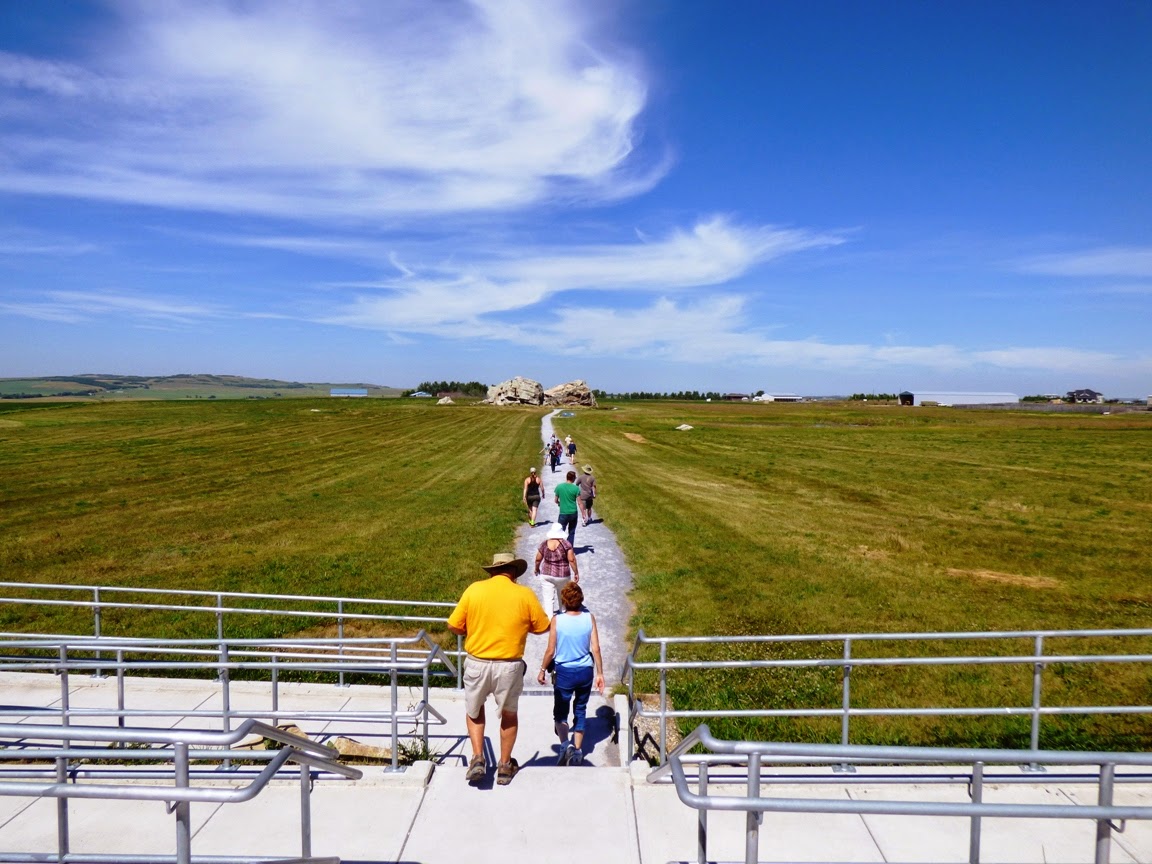 The Blackfoot people had a great story for how the rock got to this spot, a myth that could have served as the inspiration for the rock monster in the movie "Galaxy Quest". Their legendary trickster Napi was resting on the rock on a hot day, so he left his cloak on the rock, saying "Here, I give you my robe, because you are poor and have let me rest on you. Keep it always". Murphy's Law dictates that it soon got cold, and the rain began, so Napi asked for the return of his robe. The rock refused so Napi grabbed "his" cloak. In a moment, the rock was up and running after him! Napi called on his animal friends, the Bison, Antelope and Deer, and none of them could stop the gigantic rock. When all seemed lost, a bat flew straight at the rock, collided with it, and the rock was split in two! The bat had saved Napi, and got a squashed face for all his trouble (such things have to be explained somehow...).*
The geologists tell a different story, and were it not for the overwhelming evidence it would seem just as fantastical. During the Pleistocene Ice Ages, the continental ice sheets covered all of the region thousands of feet deep. Up in the Rockies at Jasper a huge rock slide dumped massive boulders onto the surface of the glaciers emanating from the high peaks. The glaciers flowed eastward onto the High Plains, eventually meeting up with the vast ice sheet that originated near Hudson Bay. The two ice sheets didn't mix, so the two "rivers" of ice flowed together towards the south. The gigantic rocks from the cliff in Jasper were dumped in a line many miles long where the glaciers moved together. These isolated boulders are called glacial erratics. 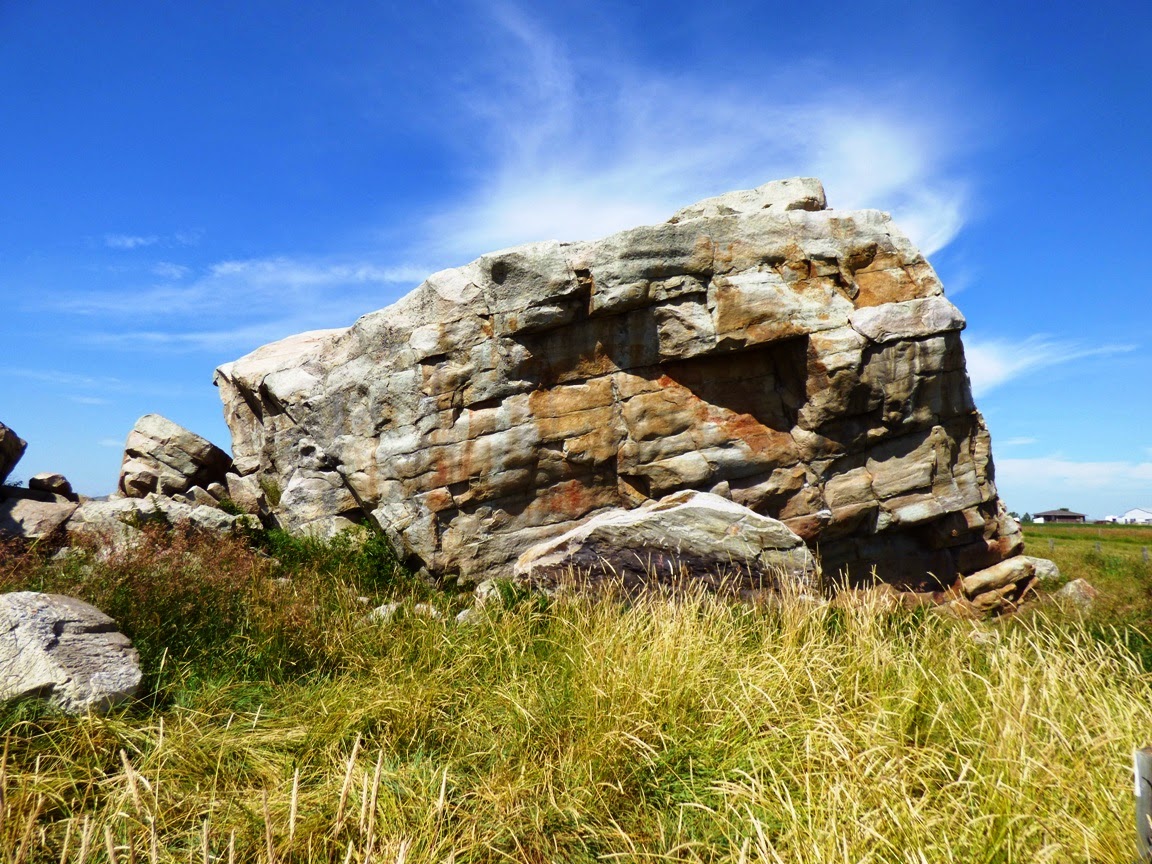 The rock is sometimes claimed as the largest erratic boulder in the world, but I have no way to evaluate the claim. It certainly is huge, and worthy of a visit (it is a few miles southwest of Calgary). The Blackfoot or other First Nation peoples were certainly impressed. Faint pictographs can still be seen on the flanks of the rock.

This is a continuation of our Northern Convergence tour of British Columbia and Alberta. In this case, I guess "convergence" refers to the two masses of glacial ice. We concluded our visit and headed back towards the Rocky Mountains and Crowsnest Pass to check out a not-so-long-ago tragedy. More on that next time.

*The Blackfoot legend is  loosely rephrased from interpretive signs at the park.
Posted by Garry Hayes at 6:41 PM