Where'd Everyone Go? Why is it so Quiet? Dealing with Dinosaurs in Drumheller 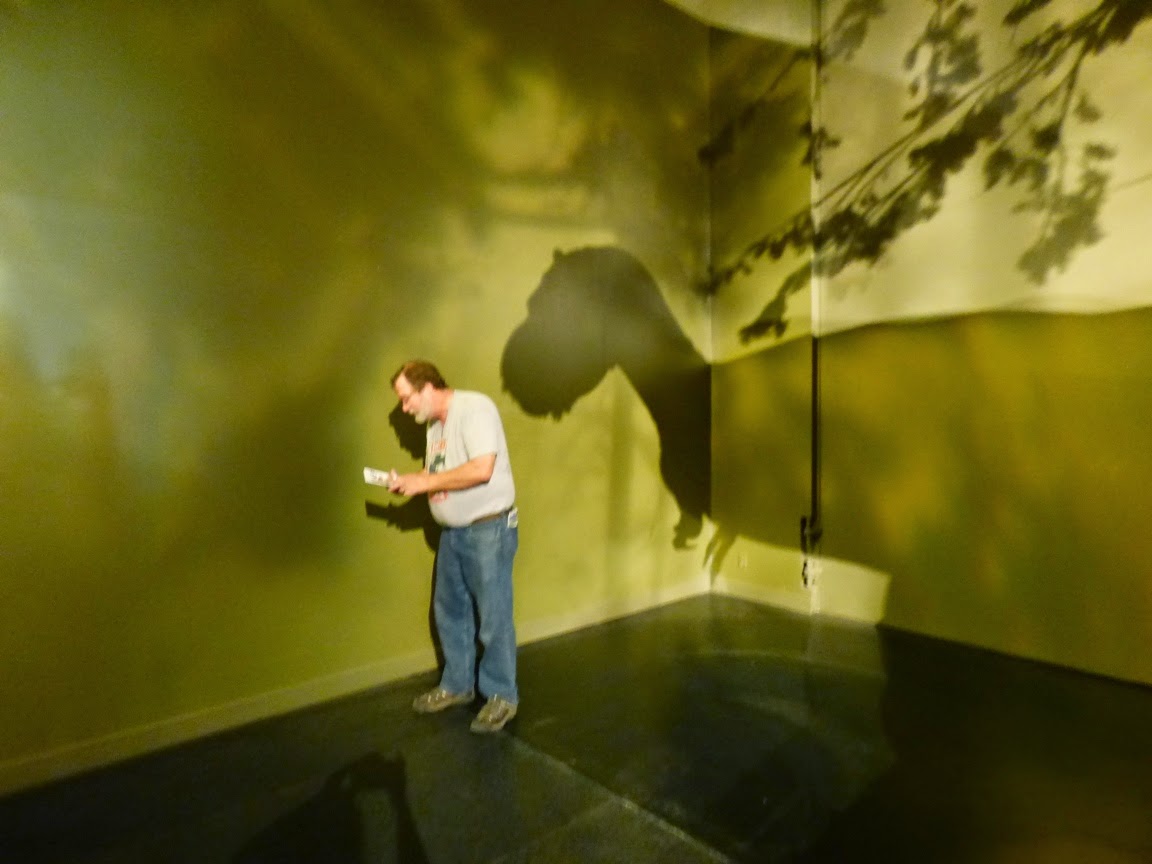 We continued our Northern Convergence exploration of British Columbia and Alberta by heading over the Great Plains for several hours to reach Drumheller, the self-proclaimed (and fairly reasonably so) Dinosaur capitol of the world. On a field trip, our students would normally expect to spend time in the field, but sometimes there are museums that simply must be seen. The Royal Tyrrell Museum of Paleontology at Drumheller is one of those places. It's worth the long drive over the flat prairie. 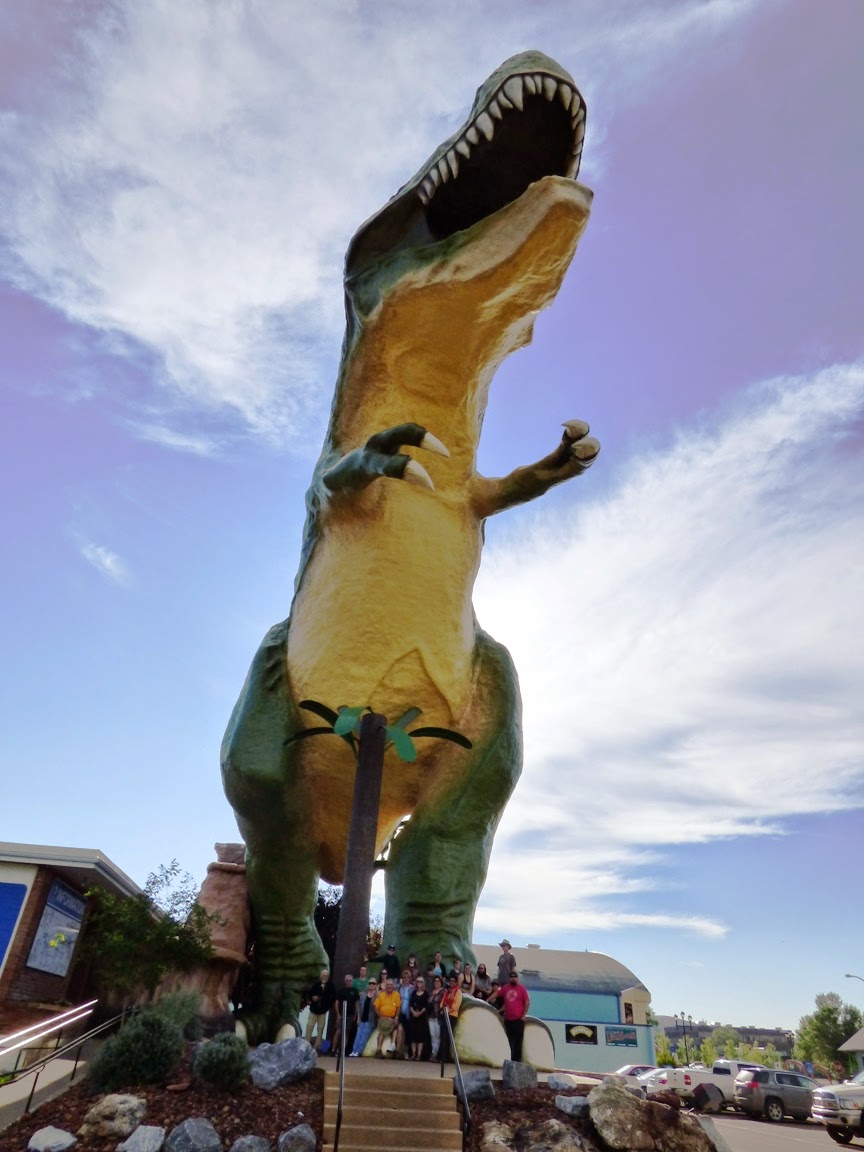 Lest you think the cheesy 150 foot long Tyrannosaur is part of the museum, don't worry, it is not. This baby is downtown at the chamber of commerce. It just begs to be photographed though, but watch out where it steps. You never know what could get caught between its toes...
The museum is far more than a "dinosaur" museum. It takes its mission as a museum of paleontology very seriously with a nicely designed tour through the entire development and evolution of life on planet Earth throughout 4.56 billion years. And dinosaurs! Lots of them! 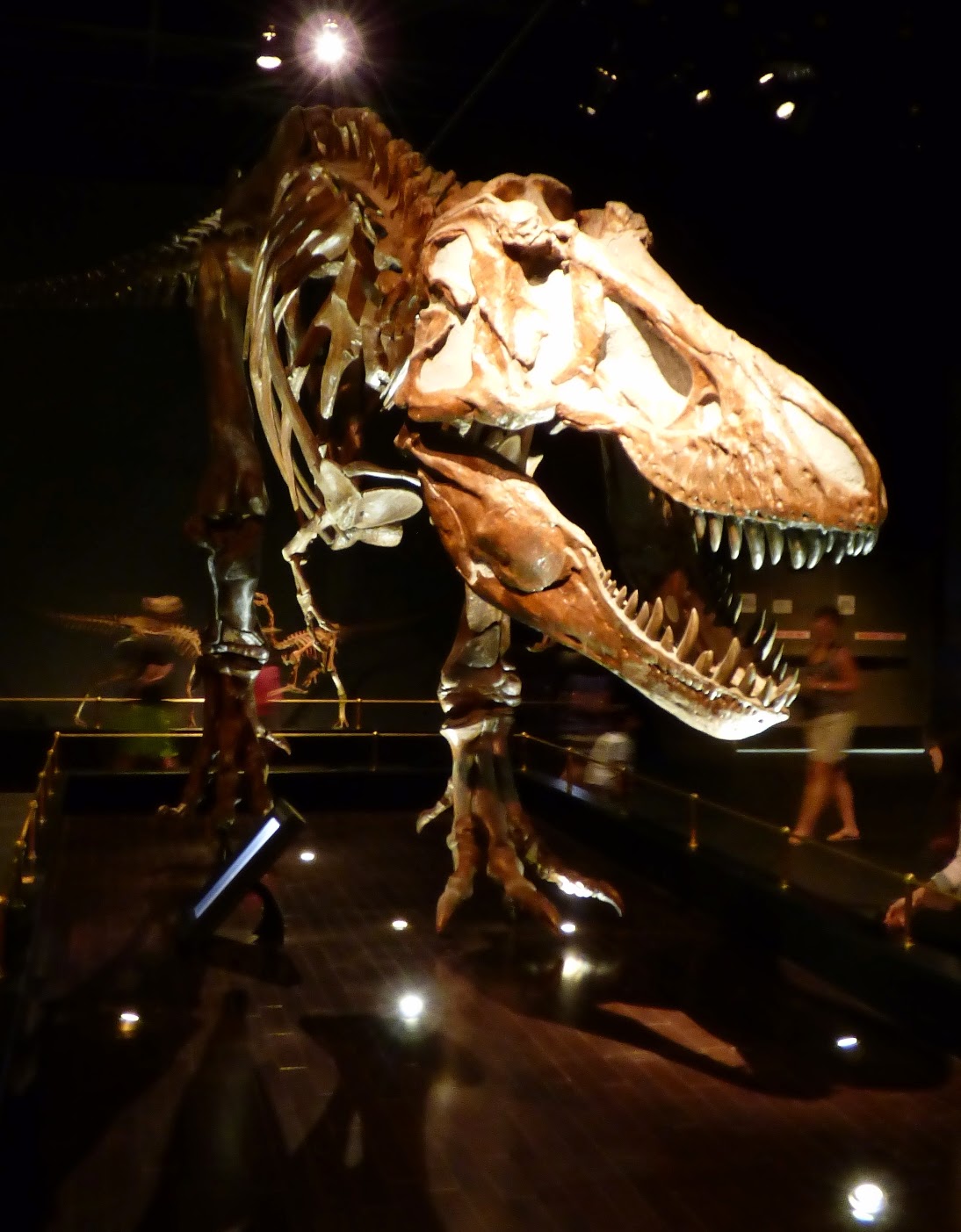 One of the problems with older vintage museums is that they displayed their exhibits in the same way that they organized their collections: as a vast and highly organized repository. I remember a museum from my youth where they had the bird's egg room, and the eggs were displayed in linear cabinets, one after another, filling the room. With lots of eggs. In long rows. Not very inspiring to a kid, despite the extreme value of the collection for research.
Museums have caught on to the necessity of using their exhibit space to tell a story, and what story could be better than the astounding adventure of life on Earth? The exhibits lay out the methods of paleontology (how we know things), and lead into displays of what we have discovered. The "pathway" leads the visitor through a series of interactive displays starting with the earliest, most primitive forms of life right up through the Pleistocene megafauna, and how they related to the ecosystems of the present day.
They have used an excellent mix of genuine specimens and life-size replicas to give a sense of the true scale of ancient forms of life, whether microscopic or gargantuan. I was especially impressed with the Dunkleosteus, a massive armor plated fish that lived in Devonian time (around 420-360 million years ago). I knew of the 30-35 foot length of the fish, but there is nothing quite like being confronted with the gaping toothless jaw, the cutting edges formed from the armor plates. To see a living one would be a bizarre and terrifying experience.
Much of the museum is devoted, not surprisingly, to the rich paleontological history of Alberta and the rest of Canada. There has been a treasure trove of dinosaurs found in the vicinity, and they have been given a lot of space in the exhibit. No kid with a love of dinosaurs could come away disappointed. But with the additional exhibits of the other major groups of animals, they may instead be inspired to learn more about the rich stories that bookmark the existence of dinosaurs on the planet.
An additional treat at the museum is the opportunity to get out and explore the starkly beautiful landscape that surrounds the museum site. Several trails lead out onto the exposures of the late Cretaceous Horseshoe formation, which once provided the coal reserves that were once mined here, and a large number of dinosaur species..
These lands where the dinosaurs once roamed are now dominated by the hair- and fur-bearing creatures, although a few of the avian dinosaurs still remain as well.
We spent four hours at the museum and wanted to stay longer, but there were other sights on the road ahead. We took off across the prairie once again.
Posted by Garry Hayes at 4:48 PM