Civilization Exists By Geological Consent...So does life in the Great Valley

The Sandhill Cranes are returning to their winter home in the Great Valley of California! In the next few weeks there will be 20,000 of them arriving at the Merced National Wildlife Refuge a few tens of miles south of Modesto. They will be sharing space with hundreds of thousands of other birds, including Snow Geese, Cackling Geese, Ross' Geese and many others. To many pundits, the Great Valley of California is a rotten place to live (see my comments about this from yesterday's post). But if you are a bird, the valley is next to paradise. It represents survival, and the reasons are geological.

The Great Valley is 400 miles long, and around 30-40 miles wide, running from Redding at the north end to Bakersfield in the south. It is amazingly flat, with total relief of only a few hundred feet. Two major river systems, the Sacramento and San Joaquin, provide a richness of water in what would otherwise be desert or near-desert. A huge range of habitats existed here at one time, including short-grass prairies, riparian floodplains, oak woodlands, lakes, and vernal pools. Although agriculture and urban development have co-opted some 95% of the valley floor, there are still pockets of native environments remaining.

The valley originated as a large shallow sea called a forearc basin along the vast subduction zone that once existed across the entire west coast of North America. The convergent boundary was eventually changed, and the San Andreas transform took its place. The Coast Ranges rose in the last few million years, acting as a rain shadow, and preventing the rivers from finding an easy path to the sea. The Sacramento and San Joaquin rivers flow outward through the Carquinez Strait, but several other rivers, including the Kings, Tulare, and Kern, don't reach the sea. Prior to settlement and diversion of the rivers for agriculture, they ended in large shallow lakes at the south end of the San Joaquin Valley. The lakes are dry today.

Though so much of the original valley habitat is gone, a few critical wetlands remain and are preserved as a string of National Wildlife Refuges. These refuges are a critical component of the migratory flyway for millions of birds. Some simply pass through, stopping long enough to eat and gather energy for their long journey, but others spend the winter here, and some stay all year.

Many tourists pass through the Great Valley without a second thought on their way to Lake Tahoe, Yosemite, or Sequoia/Kings Canyon, but at this time of year they are missing an awesome show of the variety and diversity of nature. There is nothing quite like seeing and hearing the spectacle of 10,000 geese taking off all at once. There are hundreds upon hundreds of bird species who spend at least part of the year in the valley, not to mention a rich variety of mammals, reptiles, fish and amphibians. The valley for all its problems can be a fascinating place to spend some time.
The San Luis National Wildlife Refuge Complex includes 45,000 acres of protected lands within an hour's drive of Modesto, my home base. There are a number of hiking trails (all level, imagine that!) and several auto tours, including those at the San Luis and Merced Units where I took all of these pictures today. I think we saw or heard at least three dozen species of birds in just the four hours we spent exploring.

We were entranced by the hundreds of Sandhill Cranes arriving by the minute in the setting sun. The video below provides a sense of how it felt... 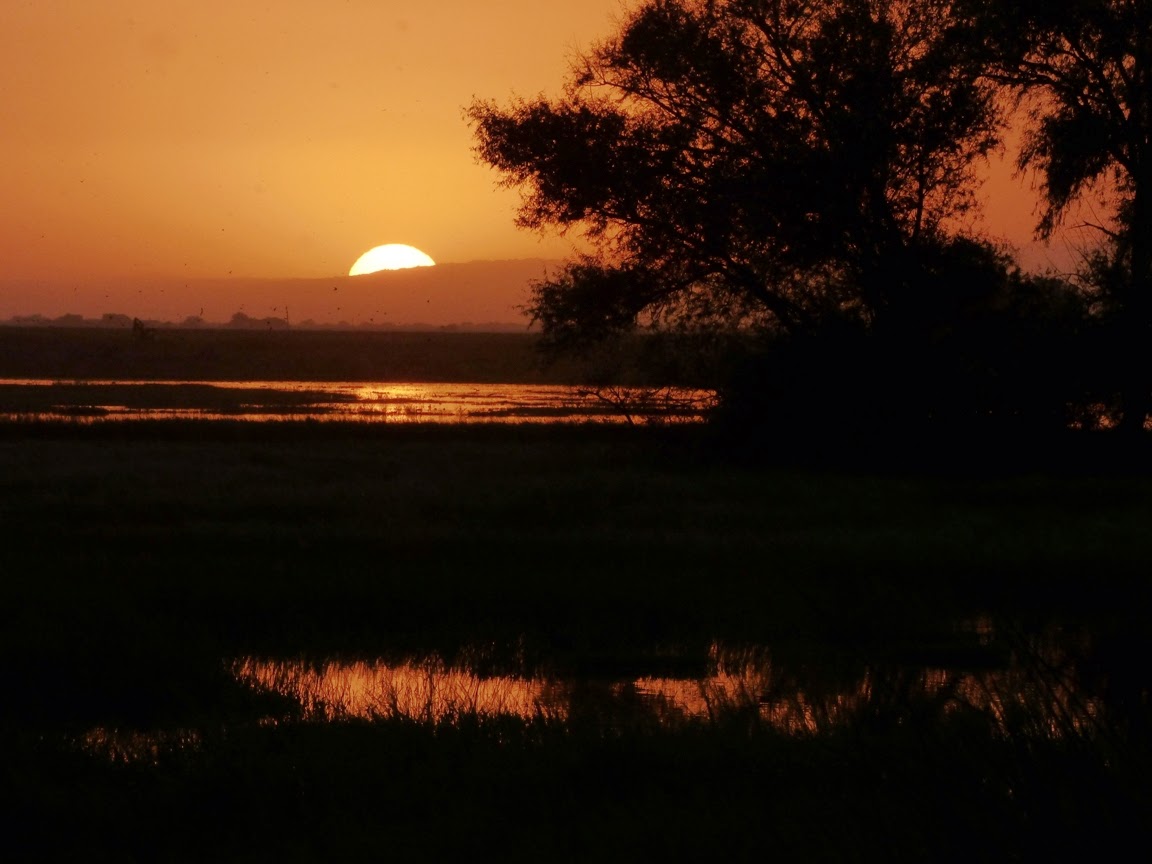 Don't just pass through the Great Valley on your next trip to California. Check out our valley and find out why we call it "Great". Two places to get information: the headquarters for the San Luis NWRC near Los Banos, and in a few short months, the Great Valley Museum on the west campus of Modesto Junior College.

The title quote comes from Will Durant, and in its entirety reads "Civilization exists by geological consent, subject to change without notice".
Posted by Garry Hayes at 1:06 AM

I enjoyed hearing the cranes! When I lived in the Black Hills, I'd hear them passing overhead in the fall -- such an eerie sound