In an Earthquake, the Ground Opens up and Swallows People: True or False? What everyone "knows" about earthquakes 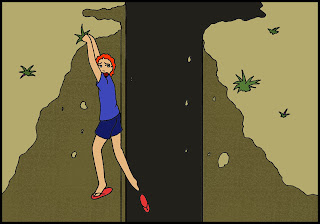 It's question #4 of our short series on what everyone "knows" about California earthquakes (a bit out of order, but whatever). The question:

In an earthquake, the ground opens up and swallows people: true or false?

I'm actually not sure how the crowd responded to this one at my lecture the other night, but they quickly appreciated my answer to the question:

True, but only in Hollywood.... 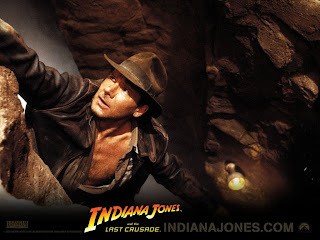 Indeed, it is a staple that if an earthquake happens in a movie, somebody is going to be hanging by their fingernails on the edge of a vast deep chasm that has opened up beneath their feet. In the third Indiana Jones movie, for instance, and in last year's 2012, again, and again, and again. And again. 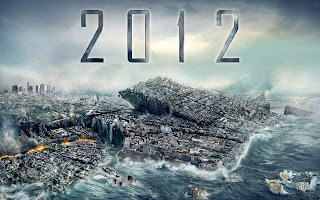 For the reality-based world, the possibility of being swallowed up in the earth during an earthquake is far more unlikely. The problem is that earthquakes are generated by the stress built up along fault lines where vast blocks of rocky crust are in contact. The shaking begins when the rocks rupture and begin slipping. They don't separate. In some faults (thrusts) the stress is compressional and in others (strike-slip) the stress is lateral. Not much chance of openings occurring in either situation. The third type of fault, termed normal faulting, the stress is extensional, which could conceivably result in the stretching of the crust and formation of fissures, but more often, one side slips downward, as can be seen in the picture below, from the 1954 Fairview Peak earthquake in Nevada. 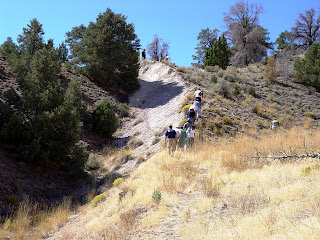 It is true that small fissures will open along fault ruptures in some situations. I saw many of these when I visited the Landers area a week after the 7.3 magnitude earthquake in 1992. The fissures were only a few inches across and no more than a foot or so in depth. Geologist Mary Hill does mention one instance where someone was killed in a fissure that opened up in a 1948 quake in Japan, but that hardly represents a pattern.

One other effect of large earthquakes is the production of slope failures and landslides, during which large fissures might open up. The Turnagain Heights liquefaction event during the Alaska earthquake of 1964 is a stunning example. Weak saturated sediments underneath the housing project were severely shaken, causing the whole landscape to break up and flow towards the adjacent bay, destroying the dwellings at the surface (I've included two pictures derived from my old slide collection, but I'm afraid I don't know who to attribute them to; I will add credit if someone can clue me in. They may be from a USGS collection). 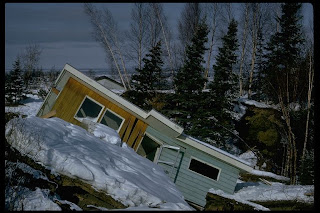 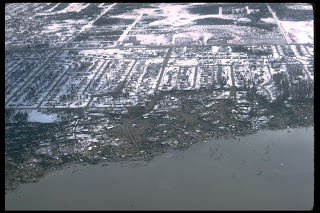 In the 1906 San Francisco earthquake, there were not any claims of swallowed people that I know of, but there is the famous tail/tale of Shafter's cow, which was swallowed up by the San Andreas fault. In the aftermath, only the poor bovine's tail could be seen at the surface. The story apparently became widespread, but in a letter from 1966, some locals recalled that the poor cow had actually died the night before. The earthquake produced a convenient fissure, the farmer tossed in the carcass, and when reporters showed up asking questions about the poor animal, farmer Shafter decided not to kill a "good story".
Posted by Garry Hayes at 12:30 AM

I would generally agree that ground opening and closing like you see it in the movies is not the most common style of deformation during most earthquakes, but after watching that exact phenomena (albeit on a small scale) in this and similar videos of ground motion and liquefaction in Tokyo during the Tokohu quake, I wouldn't be quite as quick to dismiss the possibility that a similar phenomenon might happen on a larger scale closer to a major quake's epicenter. Again, it's highly unlikely to rival the movies, but now that I've seen it documented on a small scale, I'm less willing to dismiss at least to possibility of such transient opening and closing of the ground out of hand.

The Lisbon earthquake of 1755 might have produced liquefaction and/or landslide fissures that opened and closed on people -- I haven't studied any original sources, but from what I've read it was a horrific earthquake, and there was extensive liquefaction.

I wonder if there's something in the human psyche that finds the idea of being swallowed by the ground more horrific than the real danger -- being crushed by collapsing buildings.

An urban myth about earthquakes - very interesting - it is at least very common in iconography:
"Calabrian peasants swallowed in crevasses during the 1783 earthquake”

Well, and I must say, this is both the answer I was hoping for, and a relief. =) Except for that one woman in Japan =(

Actually, if you look up the 1964 earthquake in Anchorage Alaska you will find that people were actually swallowed whole by a hole in the ground that then closed again. 2 of the Mead children were swallowed by that hole. My dad was living there then and experienced this earthquake.

It is certainly a sad story of what happened to the Mead children (check out http://www.adn.com/2014/03/22/3388654/march-27-1964-the-day-the-world.html . This happened at the Turnigan Heights development that I mentioned in the post. It was a huge liquefaction-caused lateral landslide that opened many fissures and cracks as it moved along.