Building the Perfect Impregnable Fortress in a Volcano: How to Take Over the World

It started with an entry at the Geological Society of London blog: Top 5 Volcanic Lairs for Evil Geologists, and a description of where one would make plans for world domination. It was an interesting list, and some of your lesser evil geologists might want to make use of them. But Eric Klemetti at the Eruptions blog said "pfpt", and suggested that Erebus in Antarctica was the ideal base to launch an evil plot. He made a strong case, including the use of penguins as henchmen and evil minions. Batman's enemies were certainly onto something there, but there is a problem: penguins can't hammer and drill (no opposable thumbs and all). Who was going to build the impregnable fortress? Jessica at Magma Cum Laude had some other great suggestions, but her evil geologists have the same problem:

How can you build a giant high-tech impregnable fortress without catching the attention of the local authorities? Where do you get all the supplies without raising eyebrows among the tax men and union bosses? How can one avoid paying for medical benefits and retirement plans for all the henchmen and minions? I mean, it's not like they are gonna work for minimum wage when their lives are likely to end in a hail of bullets and fireballs. Although maybe they think, given the economy, "it's a job"...

I think I have a solution to the dilemma. Mt. Shasta in Northern California. Here's the thing: the mountain is just full of a ready-made army of henchmen and minions who won't be asking for wages and benefits. Heck, they've been off the economic grid for thousands of years. 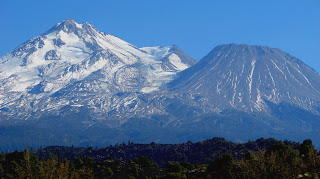 A short list of the inhabitants of the interior of the volcano includes the Lemurians of Mu who come with their own uniforms (white robes), and have a "walnut-sized organ in the center of their foreheads" that does extra-sensory...things (these descriptions are courtesy of Stephen Harris, author of Fire Mountains of the West, from Mountain Press). There are the survivors of Atlantis, of course, and their high technology. There is the Secret Commonwealth and their cities of Iletheleme and Yaktayvia. Their tunnels and passageways were carved with odd supersonic vibrations from bells. I have to imagine that it is indeed getting crowded down there (as Harris says), and they would jump at the chance to follow some evil geologist into world domination.

Any additional supplies that are needed are not a problem: UFOs have been landing on Shasta for years, taking advantage of the lenticular clouds that often form around the summit. Supply helicopters can do the same thing. Or one can ally with the aliens, too. 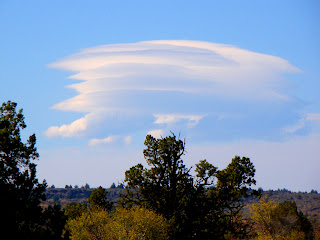 Of course, Shasta is kind of a famous volcano, perhaps the most famous in our state. If you want to use all the minions from Shasta, have them tunnel forty miles northeast to Medicine Lake Highland, California's biggest volcano. It is a vast shield-like basaltic edifice that is practically unknown even to Californians. It is barely half as tall as Shasta, but much more voluminous. There is lots of room for everyone to spread out. 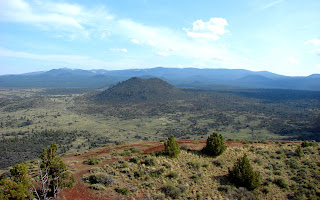 Anyway, if I were an evil geologist bent on world domination, that's what I would do...
Posted by Garry Hayes at 11:41 PM

On reflection, I note the gender inequality of my post: henchmen, tax man, and so on. I think it follows from the movie model of James Bond and impregnable fortresses. It's always men who are the henchmen and get shot up. Bond mostly kissed the women. I am sure that Shasta's population has good gender equality, however many genders they have in there...

Plus Shasta is loaded with caves.

Heh, I was thinking the same thing. Medicine Lake would be great, but I didn't want everyone to know about it. Bwhahahahahah

Just think! If you settled in Medicine Lake Volcano, you could have submersible flying machines that take off and land beneath the lake surface! Take that, James Bond!

I'm not sure it's a good idea trying to cut a deal with a secret society that routinely leaves confused hikers abandoned in forest glades with their memories erased...

If I was an "Evil Genius", my lair would be Cima Dome. The dome itself is not volcanic, but there is a volcanic field with cinder cones and lava flows on the flanks of the dome.
Cima Dome has several advantages over some of the places already mentioned:
* It's in the middle of nowhere, so visitors would be rare.
* It's in a National Preserve, so I would have my minions carry cameras and act like tourists -- they wouldn't be noticed.
* It's reasonably close to two large metropolitan areas (L.A. and Las Vegas) so supplies wouldn't be a problem.
My first invention would have to be a ray gun that can cut through granite, so I can build my lair without heavy equipment...

Plus, if I recall, there's a large lake at Shasta - good for testing out any submersible weapons you might use!